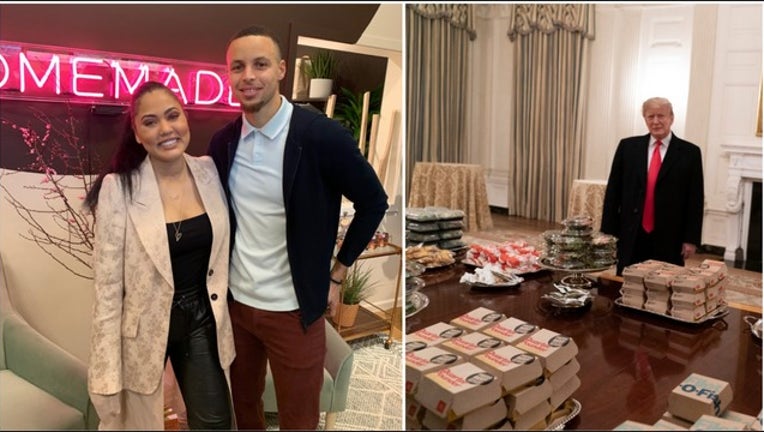 Ayesha Curry said Friday at her pop-up "Hardware" store in Oakland the offer to treat the Clemson football team to a '"real feast" still stands. The offer via twitter gained considerale attention after President Trump served the atheltes fast-food.

President Trump presented the athletes with a fast-food feast in January for the traditional dinner at the White House—complete with McDonald’s, Taco Bell, and more. The celebrity chef and wife of Warriors star Stephen Curry responded with a viral Twitter comment.

So here you have a chef with a TV show who has a popular restaurant in a fun city with a husband who is a two-time NBA MVP. Plus, the tweet gained an enormous amount of attention. Surely someone from the Tigers reached out to Ayesha Curry’s team, right?

“No, and I was hoping they would be like, ‘yes, we want to come eat,’” said Curry. “The whole restaurant was prepared for them to be like, ‘yeah, we’re going to take you up on that,’ but no one ever reached out.”

The restaurant they missed out on is called International Smoke. And in the name of a “smoked Korean short rib” or some “cedar-smoked salmon,” the Tigers dropped the ball with this one. Redemption for the filet-o-fish and tartar sauce served on a silver platter could have come by way of “wagyu shaking beef,” but no. Fortunately for the Tigers, it’s not too late.

“Our door is always open. We’re in the business of hospitality—we take care of everyone,” Curry said.