The Texas Attorney General's Office provides an update on the case of Holly Marie Clouse who has been found alive four decades after her parents were found murdered in Houston.

HOUSTON - "Baby Holly", who had been missing since her parents were found murdered in Houston in 1981, was dropped off at a church in Arizona decades ago and taken into their care, Texas officials said.

On Thursday, the Texas Attorney General’s Office announced that Holly Marie Clouse had been found alive more than four decades after her parents' murders.

MORE: 'Baby Holly' found alive 42 years after her parents were murdered in Houston

Baby Holly and her parents Tina Gail Linn Clouse and Harold Dean Clouse Jr. had last been seen by family in 1980 before they left their home in Volusia County, Florida so Dean could pursue carpentry work in Texas.

The newlywed couple’s bodies were found in a wooded area of Houston in January 1981, but were not identified until October 2021.

The couple's young daughter was not found with the remains of the Clouses, and the search continued for decades. 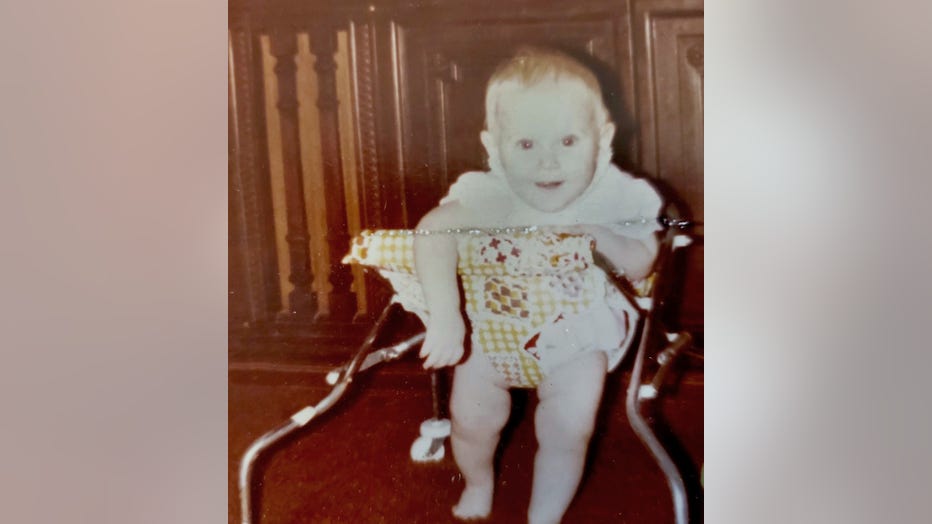 Holly Marie Clouse in a 1980 photo taken in Lewisville, Texas.

The 42-year-old mother of five lives in Oklahoma and has been reunited online with family on both sides.

The investigation into the Clouses’ deaths continues, but the Texas AG’s Office released some details Thursday on what happened to Holly decades ago.

Baby Holly was left in a church in Arizona and taken into their care, an official with the Texas AG’s Office said, adding that the family who raised Holly are not suspects in the case.

"Two women who identified themselves as members of a nomadic religious group brought Holly to the church," First Assistant Attorney General Brent Webster. "They were wearing white robes, and they were barefoot. They indicated the beliefs of their religion included the separation of male and female members, practicing vegetarian habits, and not using or wearing leather goods."

Webster said that the women indicated they had given up a baby before at a laundromat.

"It is believed that this particular group traveled around Southwestern United States including Arizona, California, and possibly Texas," Webster said. "There were sightings of this religious group around the Yuma, Arizona area in the early 80s. The women members would be seen around town at various points asking for food."

What happened to Tina and Dean Clouse?

Holly Marie Clouse was an infant when her parents were found murdered in a wooded area of Houston. Missing for 42 years, "Baby Holly" has now been found alive.

Family had last heard from Tina and Dean Clouse in October 1980, around the time that the couple was living in Lewisville, Texas, officials said.

Webster said the couple was likely murdered between December 1980 and January 1981, when the couple’s bodies were found off of Wallisville Road in Harris County.

In late December 1980 or early January 1981, the families of Tina and Dean Clouse got a call from someone who called herself "Sister Susan" who explained she was calling from Los Angeles and wanted to return the couple’s car to their family, officials said.

"She further stated that Tina and Dean had joined their religious group and no longer wanted to have contact with their families. They were also giving up all of their possessions," Webster said.

SEE THE LATEST FROM OUR ONGOING SERIES: THE MISSING

The woman asked for money in exchange for returning the car to Florida where the family lived, and the family agreed but contacted authorities about the situation, officials said.

"The family agreed to meet Sister Susan at the Daytona racetrack in Florida. The family described meeting two to three women and possibly one male. And once again, these women were wearing robes and to be appeared to be members of this religious group," Webster said.

Officials said the police purportedly took the women into custody, but they are still searching for a police report.

The Texas AG's Office is asking anyone with information in this case to contact the Cold Case Unit at coldcaseunit@oag.texas.gov or (512)936-0742.

"The Texas AG’s Office Cold Case Unit and the law enforcement agencies that work with us are committed to bringing justice in this case. We wish Holly the best. We're grateful that we found her. But we must continue with our purpose of finding  who murdered this couple," Webster said.