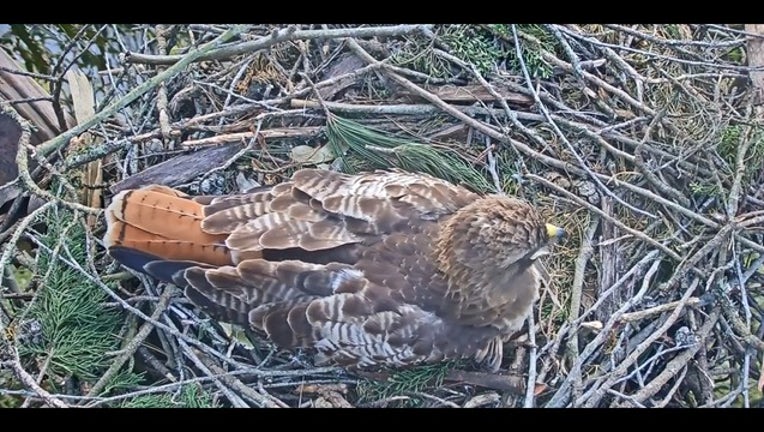 SAN FRANCISCO (BCN) - A baby Red-tailed Hawk hatched Wednesday in the Presidio in San Francisco, and the event was captured on camera by a live "Hawk Cam" erected by the Presidio Trust.

The exact location of the nest has not been disclosed, but trust officials say it's roughly 100 feet up a blue gum eucalyptus tree.

The egg was laid around March 5, and Red-tailed Hawks typically have an incubation period of 34 to 37 days, according to trust spokeswoman Lisa Petrie.

Just before 5 p.m., the chick could be observed sitting near the remains of a dead mouse its parents had brought back to the nest as food, although shortly after that an adult covered the chick back up.

One egg still has not hatched.

"Our ecologist said it would happen within a day or not at all," Petrie said. "We're hoping he's going to be hatched."

Trust staff members have created a highlights reel of "cool moments" where viewers can see the egg hatch as well as the adults bringing the mouse back to the nest and then feeding it to the chick.

"We're just all pretty excited and watching like a hawk," Petrie said.

And a highlights playlist: