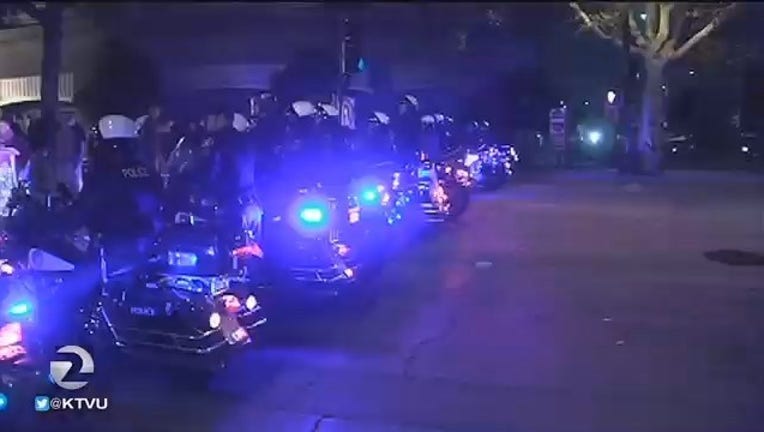 The tactic was put into effect on Thursday, Saturday, and Sunday during peaceful gatherings in downtown Oakland.

Mayor Libby Schaaf said the approach is not a new policy, but rather a better utilization of current guidelines of Oakland's Crowd Control policy.

"We are taking the position that after dark people should not be on our roadways without a permit," Schaaf said. "They still can gather in public spaces and march on sidewalks."

Cat Brooks, one of the organizers of the demonstrations, said the city is unlawfully telling protestors to move off streets. She said that approach by police stopped the march and is a violation of protestors' civil rights.

"I have a sore windpipe from an officer who put his arm on my neck so they did try to stop it," Brooks said.

Brooks also disagrees with Schaaf's claim that the tactic in not a new policy.

"She can play whatever games with words, but it is a new policy," Brooks said. "She cannot enact a new policy without dealing with the National Lawyers Guild so we will continue to resist it."

The President of the National Lawyer Guild in San Francisco, Rachael Lederman, said she co-authored Oakland's Crowd Control policy. She said the city is violating the guidelines by asking people to stay off streets because it is one that was not approved by her organization or the ACLU. She said both groups worked with the city to establish the policies in 2003.

"It's going to have the opposite effect," Lederman said. "It's going to do nothing to protect businesses… forcing people off the street could only exacerbate that problem."

Still, Schaaf said she is doing her best to balance multiple interests and the new approach is the best way to keep everyone from protests, to bystanders, to motorists, to businesses, safe.

"We've spent a lot of time analyzing our policy, analyzing the law and we are very confident this approach is fully within our policy and the law," Schaaf said.

Brooks said she and several other protest organizers would remain to press the issue on the streets.

Over the weekend several arrests were made, but there were no damage to businesses. The approach from the city is a way to prevent violence after vandals caused thousands of dollars in damage during May Day demonstrations.