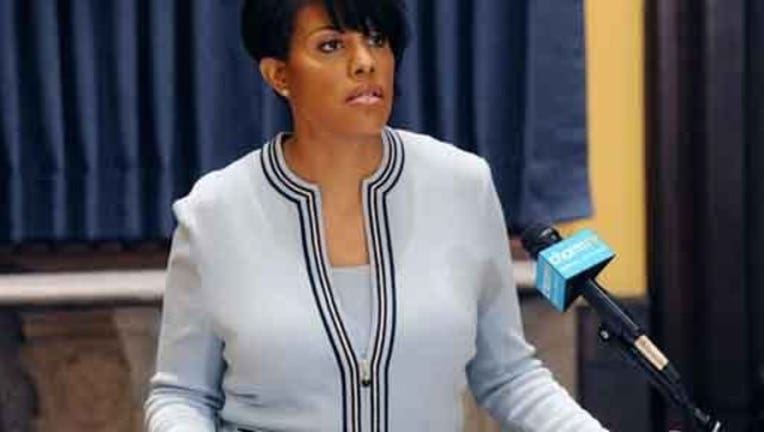 BALTIMORE (AP) — Baltimore's mayor was emphatic last week: She did not want federal oversight of her police department.

"Nobody wants the Department of Justice to come in here and take over our city," Stephanie Rawlings-Blake declared as the National Guard enforced a 10 p.m. curfew.

But it was hard to find any opposition Wednesday after she softened her tone and asked the U.S. Justice Department to launch a broad civil rights investigation that could eventually force the city to make changes under the oversight of an outside monitor.

The Democratic mayor now says she'll accept outside intervention to rebuild public trust in a city torn by riots over the death of Freddie Gray, a black man who suffered a fatal spinal injury in police custody.

"I am determined not to allow a small handful of bad actors to tarnish the reputation of the overwhelming majority of police officers who are acting with honor and distinction," she wrote in a letter to the new U.S. attorney general, Loretta Lynch.

The mayor's announcement came the day after her closed-door meeting at City Hall with Lynch, who pledged to improve the police department and told faith and community leaders that "we're here to hold your hands and provide support."

A key figure who didn't immediately respond was Police Commissioner Anthony Batts, brought in from Oakland, California, by the mayor 2 1/2 years ago to reform the department.

The mayor's request could put Batts' leadership under a microscope. A police spokesman had no immediate response to requests for the commissioner's reaction. An email and a text message were not immediately returned.

Baltimore suffered days of unrest after Gray died April 19 after a week in a coma following his arrest. Protesters threw bottles and bricks at police the night of his funeral on April 27, injuring nearly 100 officers. More than 200 people were arrested as cars and businesses burned.

Baltimore has already been participating in a voluntary Justice Department review, requested by Rawlings-Blake and Batts last fall. It would enable police to implement reforms without a court order or independent monitor.

But City Council President Jack Young said he's been warning since October that police won't change unless they're forced to.

"The police commissioner could have said, 'Well, now, I don't want to do that,' and he didn't have to do it," Young said. "In my opinion, it was a toothless tiger."

The Justice Department also is investigating whether Gray's civil rights were violated, a much narrower review than what Rawlings-Blake sought Wednesday.

Meanwhile, six officers face state charges ranging from assault to second-degree murder in Gray's death. At least two of them have filed motions challenging the prosecutor's assertion that Gray was arrested illegally.

The investigation the mayor now wants is a wide-ranging civil-rights probe, examining how police use force, and search and arrest suspects. A similar investigation followed the shooting of an unarmed, 18-year-old black man by a white police officer in Ferguson, Missouri. The department ultimately concluded that Ferguson's police and courts engaged in patterns of racial profiling, bigotry and profit-driven law enforcement, and directed local authorities to make changes. Local authorities still insist they did nothing wrong.

At least 20 police departments have been investigated this way for a variety of suspected systemic misconduct in the past five years, more than twice the number of cases opened in the previous five years, the Justice Department said when it opened the Ferguson inquiry.

Baltimore police union president Gene Ryan said the union also has "issues with many of the current policies and procedures of the department," and pledged to cooperate with any investigation that could lead to improvement in the department and officers' morale.

Stephen Rushin, a visiting assistant professor of law at the University of Illinois who is working on a book about police reform, said Rawlings-Blake's announcement shows she's serious about fixing the department. He said mayors don't typically request civil-rights investigations, but it can be smart to embrace them.

"It's to everyone's benefit if it comes up as a collaborative, unified effort to make reform," Rushin said. "If the city feels this is going to happen either way, it's to their advantage to support it."

The Rev. C.D. Witherspoon, who leads the Southern Christian Leadership Conference in Baltimore, said he's been asking for years for the Justice Department to run the city's police force from Washington.

"If this is just a probe and bring forth recommendations, as they have done in the past, that won't be helpful. If they find things that are potentially problematic, I wonder if they will be willing to put the department under receivership and take the reins," Witherspoon said.

White House Press Secretary Josh Earnest said it's up to Lynch to decide what to do next.

"She has a very good understanding of the way that those law enforcement and prosecutorial enterprises should conduct themselves," Earnest said.

Associated Press writers Brian Witte and Juliet Linderman in Baltimore, and Ben Nuckols and Eric Tucker in Washington contributed to this report.