Woman sues, saying she was violently attacked by BART police over unpaid fare

SAN LEANDRO, Calif. - It would have cost SaTae'zja Devereaux $3.60 to get from Oakland to San Leandro on New Year's Eve on BART. Instead, Devereaux, now 24, admits she skipped the fare and, in the end, paid a far higher price for the trip.

She wound up bloodied and crumpled on the ground after being confronted by three BART officers, a federal lawsuit filed Wednesday alleges.

Exclusive body camera video obtained by KTVU shows about 18 minutes of the interaction and the ultimate struggle, ending with Devereaux screaming and lying in a pool of her own blood.

In her suit, Devereaux alleges that BART officers Brian Lucas, now a sergeant; and Karl Carpio and Casey Tyler unlawfully beat her and physically assaulted her on Dec. 31, 2019, at the Bay Fair station in San Leandro, leaving her "bloody, battered and bruised," the lawsuit contends.

"All I really remember, I was watching one of the officers put a hand on his gun," Devereaux recalled in an interview. "I’m thinking this doesn’t have to escalate like this. This cannot be the end for me right now."

BART said Wednesday it could not comment on the suit. But in a statement, spokeswoman Alicia Trost said the agency and its police force "take all use-of-force incidents seriously."

The statement continued, "Nothing is more critical than building trust with riders and the communities we serve through equitable policing practices…We are constantly working to reduce use of force incidents through more holistic approaches to safety through training and community engagement."

Sacramento-based attorney David Mastagni, who represents the BART Police Officers’ Association, emailed a response saying that the "allegations in a lawsuit are just that and selective images do not accurately convey the totality of the encounter. We are confident the officers will prevail after all the evidence is considered through the judicial process."

Records show all three officers are still on the job.

The public will likely never know if the trio was disciplined for their actions because the Peace Officers Bill of Rights protects this information in most instances, including this one. This case was also never formally investigated BART's Office of the Independent Police Auditor, even though it has the power to do so.

Fare evasion costs BART an estimated $15 million to $25 million each year. Amid rising complaints about crime in the transit system and petty offenses like fare evasion, BART launched a crackdown effort with newly installed gate modifications six months prior to Devereaux's interaction.

But the accusations of excessive force, even if the officers have a legal right to detain passengers for not paying their fare, raise questions about police training and whether officers use every means possible to de-escalate seemingly commonplace issues without resorting to fists and weapons.

"What's so bothersome is just the casualness of all this," said Devereaux's civil right attorney Adante Pointer, who filed the suit in U.S. District Court in Oakland. "The officers elevated such a minor issue into a vicious, brutal assault." 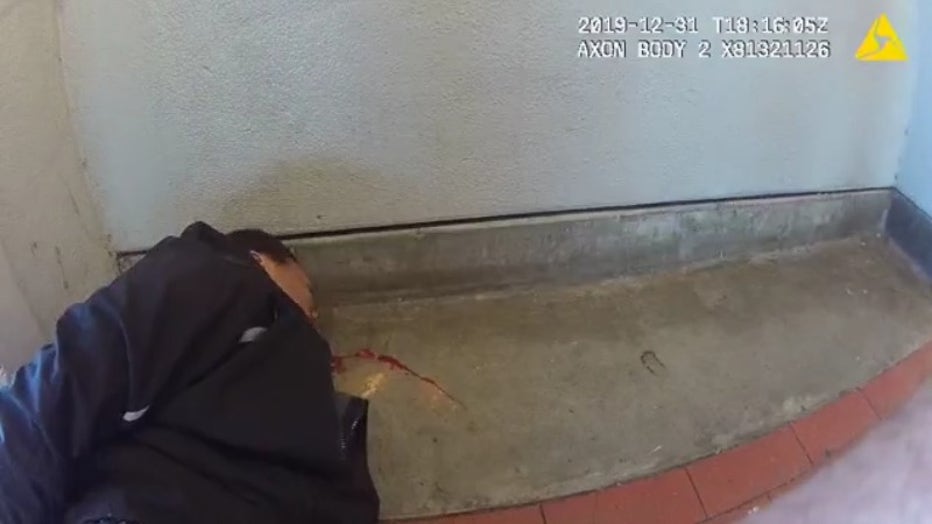 SaTae'zja Devereaux lies in a pool of blood after getting pushed down by BART police Dec. 31, 2019.

In an interview with KTVU, Devereaux admitted that she didn't pay for her ticket after she left her job as a legal and hospitality assistant at an Oakland firm. She said she was thinking about going out with her friends and what she was going to wear instead.

"I know it doesn’t really make sense," she said. "I also kind of thought BART might be free on New Year’s Eve."

When the officers confronted her, they told her she was being detained for fare evasion. Lucas is heard of the video clearly asking her to present her ID.

"You're not free to leave, you're being detained," Lucas said. "Does that make sense?"

Devereaux looks around, appearing to stall for time.

"If you don't give him your ID, you'll be placed in handcuffs and we will decide whether or not you will go to jail," Lucas said again. "Have I stuttered? Have I stammered? Have I not been clear? You need to give your ID to my partner."

Devereaux responds: "Why can't I just pay for it now?"

Devereaux asked again to pay for the ticket after the fact.

"That's not the way it works," Lucas answered.

Then he ordered her to turn around to face the wall. Just then, the three officers move in, appearing as if they want to handcuff her.

She is seen slapping away their hands. And the sounds of a struggle ensue.

It's at this point that the video goes blurry for several minutes. Devereaux is heard making blood curdling screams.

She said the situation of the men grabbing her reminded her of some past abusive relationships. 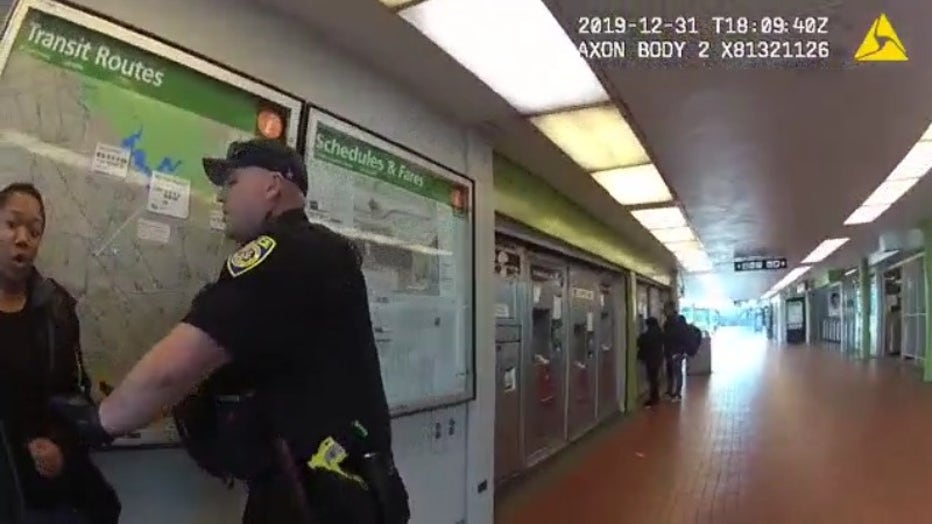 BART officers detain SaTae'zja Devereaux for not paying her BART fare on Dec. 31, 2019.

Lucas then struck Devereaux in the face twice, the lawsuit alleges, although the footage does not clearly show this.

They held her down for seven minutes. She told them she couldn't breathe. BART bystanders are seen on the video filming what was occurring and yelling at the officers to leave her alone.

She then vomited and urinated on herself. When the body camera footage returns to focus after three minutes, Devereaux is seen on the ground, a pool of blood by her face.

Pointer, Devereaux's attorney, highlighted the fact that none of the officers handed her a citation. Rather, they jumped quickly to threatening to take her to jail, Pointer said.

Pointer also noted that in this case, both Lucas and his client are Black, pointing out that instances of systemic racism can be nuanced and complicated. Abuses of power, he added, can occur with anyone, no matter the race or the gender.

In hindsight, Devereaux explained why she acted the way she did: She said that she would have given the officers her ID but she wanted to know what was going to happen next.

"I did not want to go to jail," she said. "I know that sounds super backwards. But in my mind, if I give them my information, I was going to jail anyway."

Devereaux said when she saw one of the officers put his hand on his gun and the others start to pull on gloves, she started thinking about Oscar Grant, who was fatally shot by a police officer on a BART platform on New Year's Day in 2009. 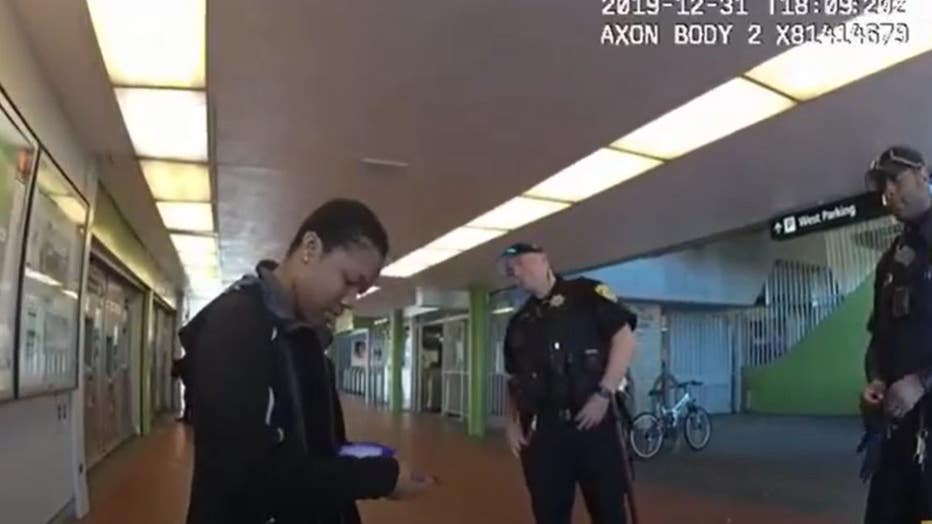 Three BART police officers are being sued for excessive force stemming from an unpaid fare.

She acknowledged she backed up a bit, backing away from the officers, still incredulous that she was being put in this situation.

"But I'm 135 pounds," she said. "It doesn't take much to take me down. I never kicked or bit. They pushed me up against the wall and slid my hands forward. These men were in front of me and on top of me."

The officers ended up calling for help and Devereaux was taken to an ambulance for treatment before being taken to Santa Rita Jail for three counts of resisting arrest and fare evasion.

Pointer defended Devereaux on her criminal case, eventually getting the Alameda County District Attorney to drop all the charges.

Devereaux is not that optimistic about filing her suit.

"I don’t think anything will change," she said. "I think they’ll still abuse their power. But what I want, at least, is for them to reevaluate how they do things."

Bloom added: "It is our goal to help foster a sense of safety for every one of the people we serve.  I don't want to see anyone hurt or fearful of the police."

But as for her emotional state, she said it's hard not to feel depressed and a little survivor's guilt.

"I actually feel a little guilty that I’m alive," she said. "And others who have had police encounters have not been as fortunate as me." 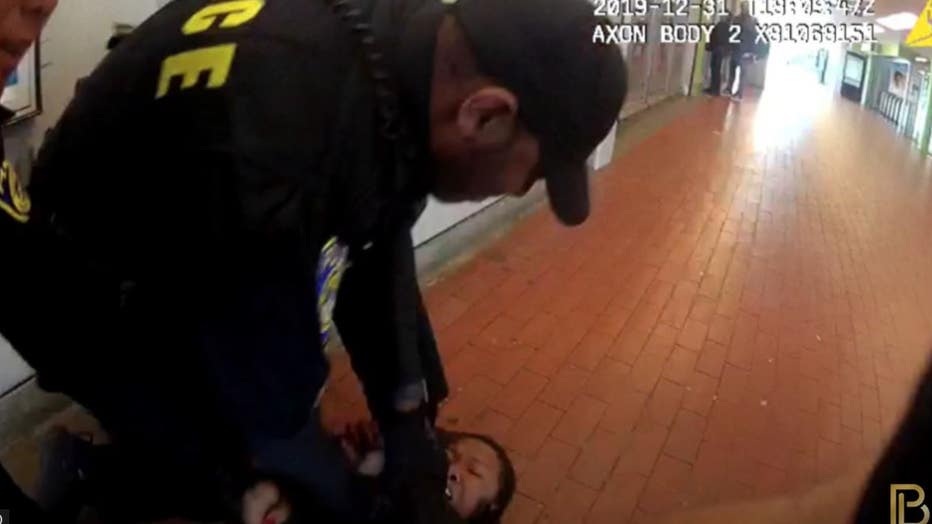 SaTae'zja Devereaux, 24, is on the ground at the Bay Fair BART station.