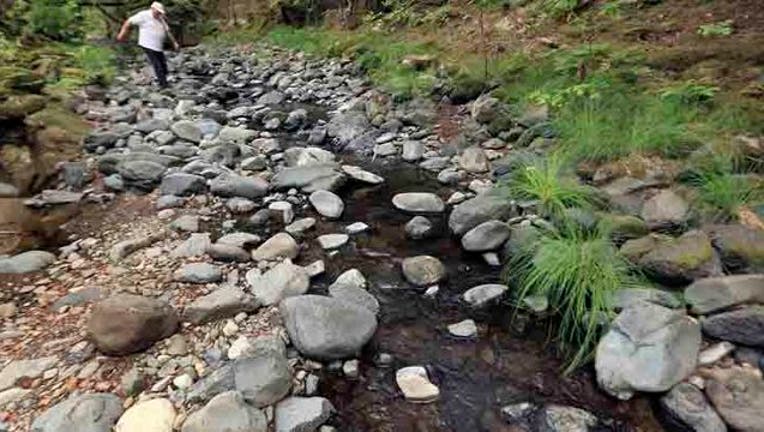 SONOMA, Calif. (AP) — California is taking desperate steps to save the last endangered salmon in Wine Country creeks that are going dry because of over-pumping and the drought, officials said Thursday.

Water has run so low in the four tributaries of the Russian River in Sonoma County that state workers have been dispatched with nets and buckets to rescue the last surviving coho salmon.

Threatened steelhead trout are also being pulled from drying stretches of the waterways.

In addition, the state Water Resources Control Board next week will consider ordering world-class wineries and thousands of other landowners along those creeks to stop all watering of lawns and to start monitoring how much water they are using.

"Fish rescue is an emergency-room action. It's not a solution," said Andrew Hughan, spokesman for the California Department of Fish and Wildlife. "The solution is water in the creek."

The state is not asking the wineries to cut back on watering of gravevines. The state says pumping from wells near the creeks is helping draw down the levels in the waterways.

Landowners and vineyard managers are trading blame for draining the streams.

"It's more than just" drought, said Jim Doerksen, a ranch owner along Mark West Creek, one of the four tributaries. "Vineyard wells are pretty substantial wells."

Sonoma County's billion-dollar wine industry contends it's cutting water use as much as it can.

"Cohos are in a pretty dire situation here in these watersheds," said Doug McIlroy of the Sonoma County Winegrape Commission. "A lot of us are aware of that and a lot of us are doing everything we can to help on that."

California is caught in its driest-four year period on record. Gov. Jerry Brown has ordered 25 percent mandatory conservation starting this month in cities and towns. Many agricultural areas, mostly in Central and Southern California, also have been told to cut water use.

The measures under consideration in Wine Country would apply to 13,000 property owners along the Russian River tributaries running through Sonoma and Napa counties.

The creeks once supported a thriving commercial catch that took thousands of coho salmon a year. Today, local populations of coho survive only through government breeding programs.

The water board will consider ordering wineries and homeowners to use only recycled water on lawns and other landscaping.

Water board members also will decide whether to require everyone along the creeks to start measuring how much water they are drawing from the creeks and from wells along the streams.

The groundwater tracking requirement would be rare in California, which has long abided by Gold Rush-era laws allowing landowners to pump groundwater unregulated and at will. Legislation passed in 2014 will gradually phase in groundwater regulation.

McIlroy noted that many vineyards along the creeks have granted access to the wildlife officials who are trying to move salmon to areas of the streams that still have more water.