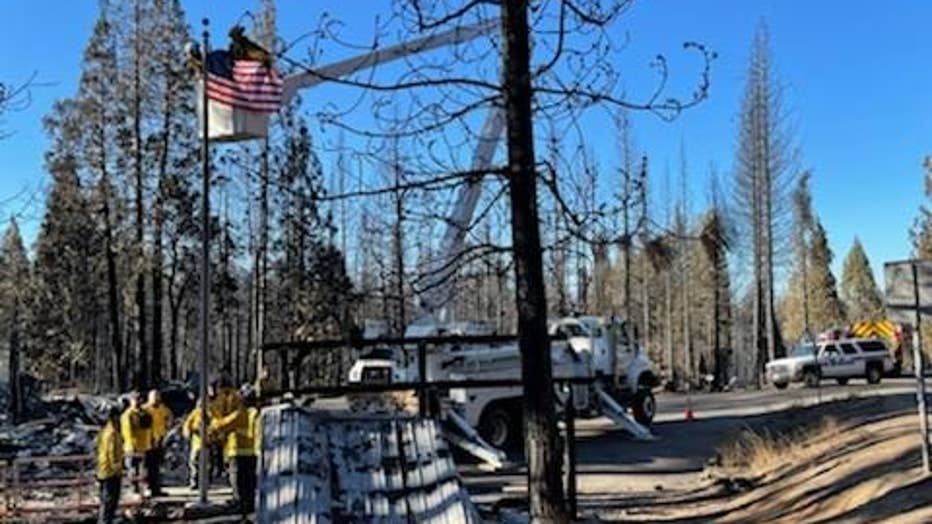 On Sunday, Sept. 12, 2021, firefighters from Task Force 2278, raised the American Flag on the pole where the Grizzly Flats Post Office once stood. (CAL FIRE )

The photograph taken on Sunday showed members of Task Force 2278 standing in the desolate landscape left in the wake of the flames that raced through the area from the Caldor Fire. Waving above them was the American flag which firefighters raised on the pole that marked the location of the now burned down Grizzly Flats Post Office.

Task Force 2278 has been one of the many teams helping to battle the Caldor Fire which erupted one month ago Tuesday. The task force is made up of personnel from fire departments in Santa Clara, San Mateo, Milpitas, and San Jose, as well as the Livermore-Pleasanton Fire Department and Monterey Fire.

The photo spoke volumes, as it demonstrated that amid the destruction rose the strength and the promise to rebuild, while also representing the hard work of those who tried to protect residents of the area.

"I think it speaks to the determination and the commitment that these firefighters have to that community," Cal Fire Public Information Officer Marco Rodriguez told KTVU, adding that while the immediate fire danger was over, fire crews’ work there was not. "Even though it might all be burned down, they're still there, and they won’t be going anywhere," Rodriguez said.

He explained that fire crews would be remaining in the area for months to come, initially, to keep an eye on hot spots to ensure flames did not flare up but also for mop up, including hauling out hazardous materials and other clean-up. Local fire units would eventually take over.

SEE ALSO: Ukiah dodges a fiery bullet, Calpella does not

Little has been left of Grizzly Flats after the Caldor Fire ripped through the small community of some 1,200 residents. 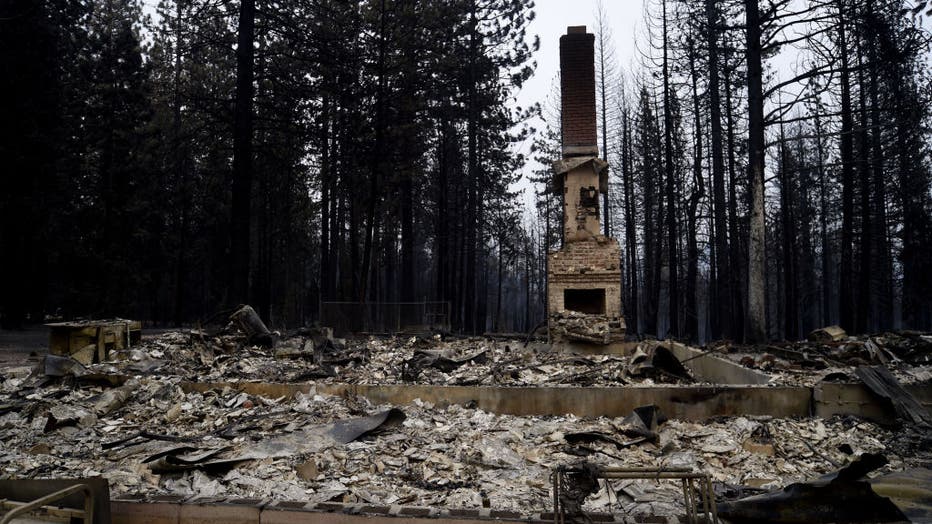 Cal Fire said that the fire destroyed a majority of the homes there. 444 homes were gone, while flames damaged more than 70, and left only 170 standing.

"So our job obviously -- it’s to put out the fire. But after that, it's not over. That’s just the beginning of the long process of working together with the community, to rebuild something they lost," Rodriguez explained.

As of Tuesday, the Caldor Fire was 68% contained. In all, it's consumed 219,267 acres in El Dorado, Alpine and Amador counties. More than 1,000 structures have been destroyed.