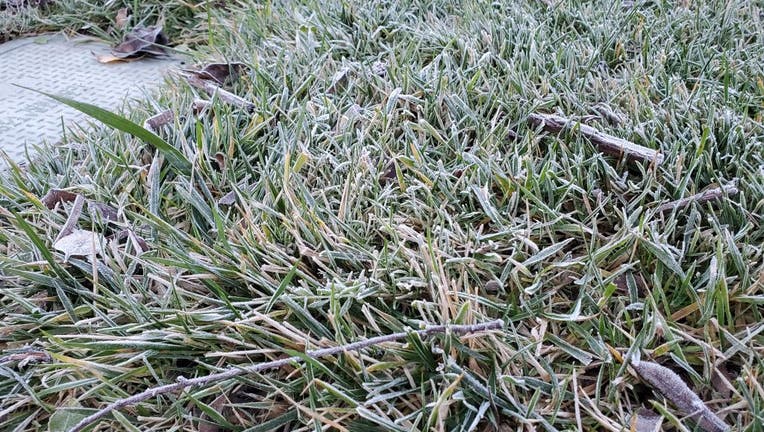 Close-up of frost on ground in the San Francisco Bay Area, San Ramon, California, during a period of unseasonably cold weather, (Photo by Smith Collection/Gado/Getty Images)

MARIN COUNTY, Calif. - The City and County of Sonoma have extended their extreme-cold weather warming center operations through Saturday morning Friday this afternoon, Marin County opened up a similar center in San Rafael.

The winter weather tug-of-war will be fully engaged this weekend and official winter is still three weeks away. Marin County, has opened a severe weather emergency shelter, to bring comfort and to save lives.

"To really bring our unhoused neighbors out of the cold and rain snap that we're experiencing," said Gary Naja-Riese, Director of Marin Homeless Services.

This is extremely critical because, of the 120 homeless beds available, they are all filled up. These 60 will keep people out of killing cold.

"A shelter like this allows the folks to come in, to dry off, to warm up, to get a warm meal and even set connected to some services," said Naja-Riese.

Primarily intended for Marin's unhoused population, the 60-bed facility is in addition to other public and private shelters in the county.

Whether it was in the normally warm South Bay or the sheltered Alamo area, often moderate Bay side Martinez or the often cold North Bay Valley, Jack Frost left thick frost everywhere. The National Weather Service has issued freeze warnings, as low as 26 degrees, for the interior valleys in Marin, Sonoma and Napa counties where average December lows are in the mid-to-upper 30s.

The City and County of Sonoma have extended their extreme cold weather warming center operations through Saturday morning Friday This afternoon, Marin County opened up an a similar center in San Rafael.

Freeze warnings have also been issued from San Jose to just north of Hollister where that region's December average low is 46 degrees. The lower the temperature, the easier to succumb to cold.

"The atmosphere becomes much more effective at pulling that energy and the heat out of the bodies. So, the bodies can cool a lot faster and have cold impacts much, much sooner than we would at warmer temperatures," said National Weather Service Warning Coordination Meteorologist Brian Garcia.

This is especially true for people with no ability to pay for heat, or who sleep in their cars, or in tents, camps or under freeways.

That's why freeze warnings, once issued to inform farmers of potential crop damage, have become key indicators for human services groups to get unhoused people inside, nationwide.