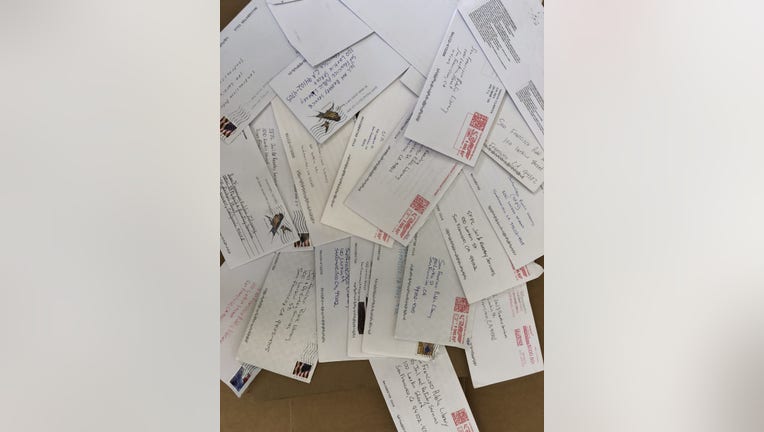 SAN FRANCISCO, Calif. - An older transgender woman incarcerated in a West Coast prison wanted to learn how to put on makeup. A simple Google search could have given her 6,440,000 results. But behind bars, she had no access to any of that.

With extremely limited and expensive access to the Internet, she wrote to librarians through the "Reference by Mail" program.

"It’s so beautiful that she was willing to share this with us," said Rachel Kinnon, manager of the Jail and Reentry Services in the San Francisco Public Library, "She trusted us enough to reach out and thought of us as a resource in that kind of very personal search."

The librarians wanted to be careful with their patrons’ identity and privacy. They did not provide the women's name or the correctional facility where she's held. Even the respondents to the reference letters only know the patrons by their first name.

The library receives roughly 300 to 400 handwritten letters a month from people who are incarcerated - whom the librarians refer to simply as patrons - of various backgrounds requesting all kinds of information.

"One of the main things we are used for is reentry planning," Kinnon said. "People are writing with questions about anything that would help them settle in the area where they are being released and start a life there."

The letters cover all kinds of requests about pop culture and daily life. There have been letters asking for song lyrics. Requests have come in for images of puppies and cars. Others have sought research for a college course or role-playing questions that would help patrons settle friendly debates with their cellmates.

The Reference by Mail program began at the San Francisco Public Library in 2018. The program was modeled after a similar program at New York City's Public Library, 30 years ago.

The San Francisco program serves patrons across California state and federal prisons as well as local county jails. This accounts for close to 10% of all incarcerated people in the United States, according to the Sentencing Project.

As part of the reference services program, a group of 30 Bay Area librarians and interns from the graduate library and information science program at San Jose State University are trained to give professional, well-researched replies within two to four weeks.

The letters are randomly assigned. But questions that require specific expertise are assigned to certain librarians. For example, UCSF librarians were tasked with answering medical questions while librarians from Diablo Valley College would help with students in the academic program.

The Reference by Mail program thrived during the pandemic.

"We thought we were a heavily utilized program (before the pandemic)," Kinnon said. "We were already getting 50-60 letters a week."

But when most or all prisons and jails went into lockdown soon after COVID-19 hit, imprisoned people were cut off from their channels of information. They couldn't see family and friends as visitors while many educational programs with teachers were eliminated. So, many incarcerated people turned to the entirely remote Reference by Mail service.

"Our mail volume actually doubled during COVID. We started getting 100 letters a week in March and April 2020 because people became that much more in need of reliable information," Kinnon said.

Additionally, questions related to the pandemic were prioritized and responded to immediately with a COVID-19 information packet created by the medical librarians from UCSF.

"We knew how important it was for people inside to have information right away and protect themselves from all the outbreaks that were happening inside," said Jeanie Austin, a librarian in the jail program.

Cut off from the outside world

It is clear from the letters that patrons of the program are very grateful for the service and appreciative of the service, the librarians said.

However, due to privacy concerns, only limited testimonials were provided.

"Dear Public Library, I received your art print-outs on April 22. I was so surprised and amazed that the arts you sent were that beautiful. For the very first time in almost two decades that I ever own something so beautiful like that," said one patron.

"You can tell that they really rely on us as a consistent connection to the world," said Kinnon.

On the other end of the correspondence, librarians and interns that responded to the letters found this program a rewarding and humbling experience.

Information as a human right

Researching for people incarcerated became a unique way for respondents to learn more about the world.

"We became librarians because we are curious people and we also benefit from people’s curiosity of the world," said Austin.

"We would receive a lot of song lyric requests," said Evette Allahverdian, a former intern of the program. "A lot of times, it would be songs that I have never heard of, so it was really cool to discover new music that way."

Allahverdian described the process as emotionally tolling and gratifying at the same time. Some of the letters were intense, she said, and it was tough to recognize how easy it was to take access to information for granted.

"But in the end, it was always gratifying because I knew that some of the responses I was providing could possibly help people and their futures," said Allahverdian, "it is humbling to think that even an image could make a world of difference."

To better understand the role of technology in their lives, Kinnon would encourage interns to spend half a day without technology; without going online, reading the news, and using their phones.

"That is something I consider when I provide information to patrons because they are writing to us knowing that they do not have access the way we do," Allahverdian said. "That motivated me to give them the best we could."

From a public library’s point of view, access to information is a basic human right.

"We all have the right to know true and accurate information so that we can make good decisions and take good care of ourselves," Kinnon said. "I hope that people who hear about this program will think about what it is to be cut off from information and what that can do to your relationships, self-image, and future planning."

As the program expands, Kinnon and Austin hoped that more libraries would join them. The Sacramento Public Library was one of the libraries in the onboarding process.

"We can’t change how it is for people to be in prison in most ways," Kinnon said. "But we can bring technology a little bit closer for them."