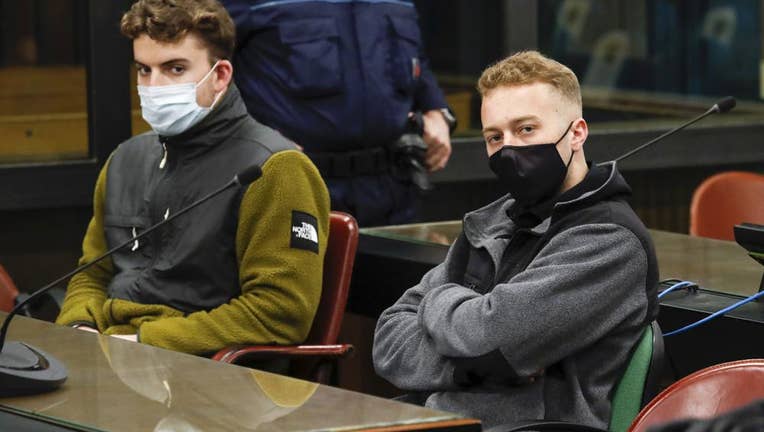 FILE -- In this April 29, 2021 file photo, Gabriel Natale-Hjorth, left, and his co-defendant Finnegan Lee Elder, both from the United States, wear face masks to curb the spread of COVID-19 as they sit during a break of a hearing of their trial in Rom

ROME (AP) - The pandemic was just bearing down on Italy when the trial began of two young Bay Area men, charged with the murder of an Italian police officer near their hotel while they were on vacation in 2019.

On Wednesday, after more than 14 months, defense lawyers will wrap up their arguments, and the two defendants, former schoolmates from California, can expect to learn their fates later in the week.

Finnegan Lee Elder, now 21, and Gabriel Natale-Hjorth, now 20, insisted they acted in self-defense. They say they thought they were being attacked by a pair of thugs or mafiosi when Carabiniere Vice Brigadier Mario Cerciello Rega and fellow officer Andrea Varriale approached them wearing plainclothes in the early hours of July 26, 2019.

The officers had been dispatched to follow up on a report of a small-scale extortion attempt, allegedly devised by the Americans in reprisal for a botched drug deal when the young men were out in Trastevere, a nightlife district in Rome, earlier in the night.

The case has largely come down to the testimony of Varriale, who insisted the officers identified themselves as police, against that of the young men, who according to their own accounts, had spent the evening drinking beers and shots and trying in vain to buy cocaine. Neither officer brought his service pistol to the rendezvous.

Elder told the court that the heavy-set Cerciello Rega was scuffling on top of him and he feared the officer was trying to strangle him, so he pulled out the knife and stabbed him. When the officer didn’t immediately let him go, he stabbed again.

Under Italian law, alleged accomplices can also be charged with homicide even if prosecutors admit they had no material role in the actual slaying. The prosecutor in her final arguments asked the court to convict both defendants and sentence them to life imprisonment, Italy’s harshest criminal penalty.

Judge Marina Finiti has indicated verdicts would likely be delivered on Wednesday or Thursday.

Shortly after trial began on Feb. 26, 2020, Italy, the first nation in the West hit by the COVID-19 outbreak, went into a severe lockdown. Several of the hearings were held without the public or even journalists. At times, Elder and Natale-Hjorth followed proceedings via a video link from jail.

The defendants told the court that after some sightseeing, they decided to visit Trastevere, a Rome neighborhood popular among young people.

At one point in the evening, the defendants testified, they sought to buy cocaine. After being put into contact by a go-between with a dealer, they paid 80 euros ($96) but instead of cocaine they received an aspirin-like tablet. Before Natale-Hjorth, who speaks Italian, could confront the dealer, a separate Carabinieri patrol intervened and those on the scene scattered.

Cerciello Rega, wearing a T-shirt and long shorts, and Varriale, also dressed casually on the warm night in a polo shirt and jeans, were assigned to respond in plainclothes to what prosecutors contended was an extortion scheme devised by Natale-Hjorth.

When the cocaine transaction was botched, the Americans snatched the go-between’s knapsack in reprisal. Inside was the man’s cell phone, and Natale-Hjorth testified that he spoke with the man by phone, setting up a rendezvous to exchange the bag and phone in exchange for the cash they lost in the drug deal.

The defendants have insisted they expected the go-between to show up outside their hotel. Instead two men — the plainclothes officers — appeared without the go-between, they said. It was the go-between who had phoned police to report his bag stolen.

Both defendants are also charged with attempted extortion.

While Cerciello Rega wrestled with Elder, Natale-Hjorth scuffled with Varriale, who suffered a back injury. After the stabbing, the Americans ran to their hotel room, where, according to Natale-Hjorth, Elder cleaned the knife and asked him to hide it. Natale-Hjorth testified that he hid the knife behind a ceiling panel in their room, where it was discovered hours later by police.

The Americans are also charged with assault for causing Varriale’s injury, carrying an attack-type knife outside home without just cause and resisting a public official.

During pre-trial investigation, Elder told his lawyers to check out video footage from a bank near the stabbing, but it turned out no video surveillance camera was running that night.

Italian newspapers published a photo of Natale-Hjorth blindfolded and with his hands cuffed behind his back during questioning at a Rome Carabinieri station, in violation of Italian law protecting suspects’ dignity. Among those in the questioning room was Varriale, who said he used his phone to film the incident but didn’t transmit the video. The blindfold incident was put under a separate investigation.