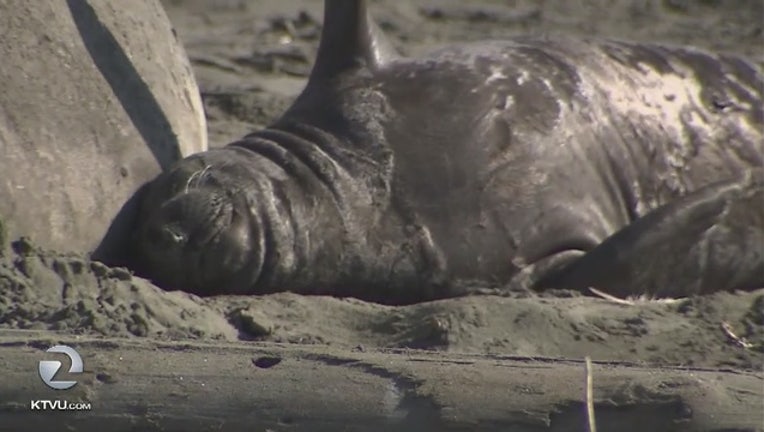 SAN FRANCISCO (AP) -- Tourists unable to visit a popular beach in Northern California that was taken over by a colony of nursing elephant seals during the government shutdown will be able to get an up-close view of the creatures, officials said Friday.

Point Reyes National Seashore rangers and volunteer docents will lead small groups of visitors starting Saturday to the edge of a parking lot so they can safely see the elephant seals and their newborn pups, said park spokesman John Dell'Osso.

About 60 adult seals that gave birth to 35 pups took over Drakes Beach during the 35-day government shutdown, leading park officials to close access to the beach.

It's likely recent storms and high tides inundated the animal's normal habitat and so they sought a wider swath of dry land around the corner, Dell'Osso said.

He said the guided tours will be an opportunity for visitors to witness the recovery of a once-threatened species from about 40 yards (36 meters) away.

Visitors can normally view the seals from an overlook at Chimney Rock, often with assistance from volunteer docents who provide binoculars and spotting scopes as well as interpretive materials.

"This is a great story about the recovery of a species," he said.

Dell'Osso said a large winter storm is forecast for this weekend and that may keep people away but officials will decide next week if the weekend tours will continue.

Elephant seals began appearing at the seashore in the 1970s after an absence of more than 150 years. The marine mammals spend most of their lives out in the ocean but return to shore each winter to birth pups and breed and, later, in spring or summer, to molt, the Press Democrat reported.