Bear does parkour after breaking into home

Ann Bryant with the Bear League had to chase the cub out of the home and recorded video of the moment.

LAKE TAHOE, Calif. - A mother bear and her two cubs broke into a home in Northern California before being chased out by volunteers of a bear advocacy group, and video captured one of the cubs’ parkour-style escape.

The bear family broke into the residence on Wednesday in Homewood, located just outside of Tahoe City.

Ann Bryant is with the Bear League, a Lake Tahoe–area nonprofit that works to keep bears safe and in their natural habitat, and was called to the house to address the reverse-Goldilocks moment.

Upon her arrival, the mama bear ran outside “where she proceeded to play innocent,” according to a Facebook post by the Bear League. One of the cubs also scrambled outside after its mother, but the other one remained in the house.

“He was not about to voluntarily abandon a kitchen packed with food,” the post reads. 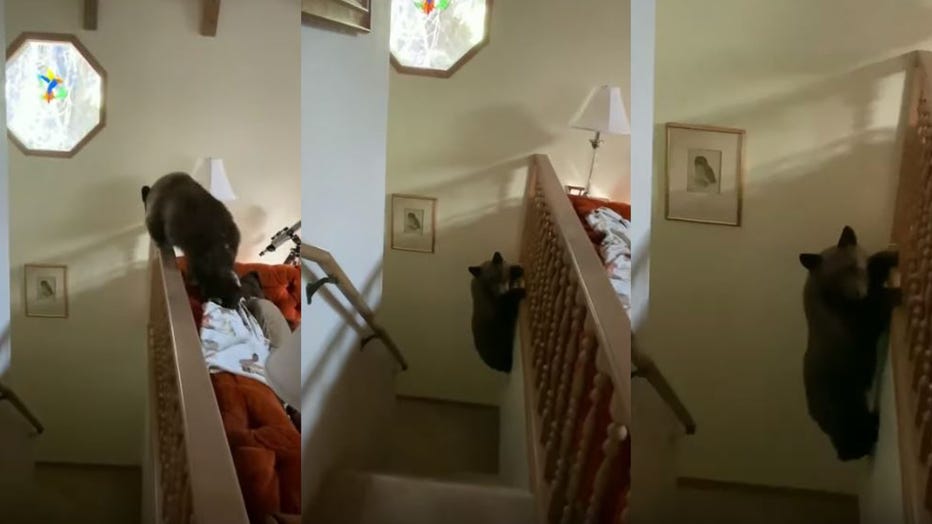 A black bear and her two cubs broke into a home in Homewood, California. While the mama bear and one cub ran outside, the second cub had to be chased out — and the moment was captured on video. (Credit: Ann Bryant via Storyful)

Bryant had to chase the second cub out of the home and recorded video of the moment. The video shows the bear scurrying over a couch and a banister before jumping across the staircase and running away to safety.

“It’s no fun having bears in houses,” the league said. “They do not tidy up after themselves.”