BERKELEY, Calif. - Some of life’s sweetest moments are those that mark the coming of a full circle. On Friday, when Savelle Jefferson walked across a stage to receive his degree from UC Berkeley Law, he celebrated not only his own hard work and accomplishments but also a decades ago moment, when his own mother walked a Berkeley stage, in cap and gown with him in her arms.

In a powerful and touching "how it started vs. how it’s going" tweet, the law graduate paid homage to his mother, as he shared then-and-now photos and said, "26 years ago my mom carried me across the stage as she graduated from @UCBerkeley." Then cutting to present day, he wrote, "26 years later I was blessed enough to walk across the same stage as a @BerkeleyLaw graduate."

For Jefferson, his path to attending one of the nation’s top law schools (ranked #9 overall by U.S. News & World Report), began with his mother, Veronica Piper-Jefferson, who encouraged her children to work hard and do well in school, all while she led by example.

Piper-Jefferson was in graduate school when she had Savelle. That photo from her own commencement ceremony in 1995 holding her then 6-month-old son was actually from her second go at the university, earning her Master of Social Work (MSW) degree. The first time around, she attended Berkeley as an undergrad, receiving her Bachelor of Arts in social welfare. 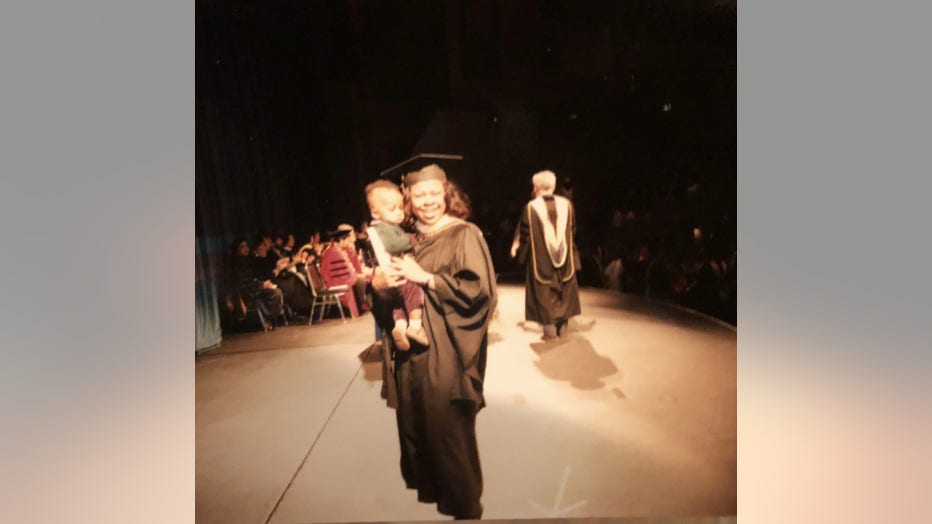 "...my mom talks about having to go to class pregnant and deal with the stresses of going to such a top institution such as Berkeley and dealing with a newborn," Jefferson shared with KTVU.

The law grad, whose family later moved to the Fairfield-Vacaville area, said that the Berkeley campus and its surrounding areas were part of his early years. "My mom frequently talks about pushing me in a stroller from Berkeley Bart station up the hill to get to class." Jefferson explained. 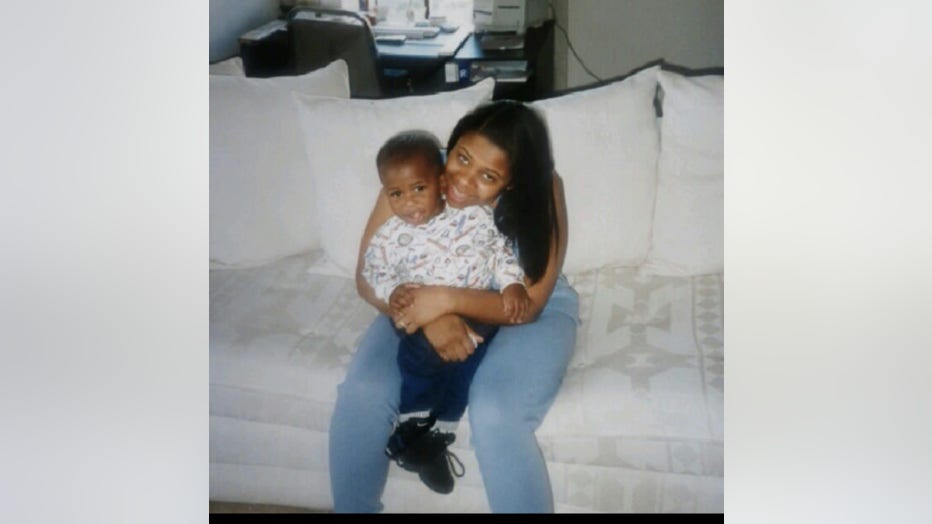 And she would attend lectures with her infant in tow because she couldn’t afford childcare, an image that has been immortalized in a photo that still hangs on campus.

"If you go to the hall on campus that houses the MSW program, my mom is seen in the 1995 class photo holding me," Jefferson said. "I’ve been on this campus since I was a kid and I always dreamed of one day attending."

So some may say, in many ways, Savelle Jefferson was destined to walk the Berkeley campus. And doing so as a law student carried even more meaning, as it was an endeavor his mother at one point also set out to do but couldn’t accomplish herself. 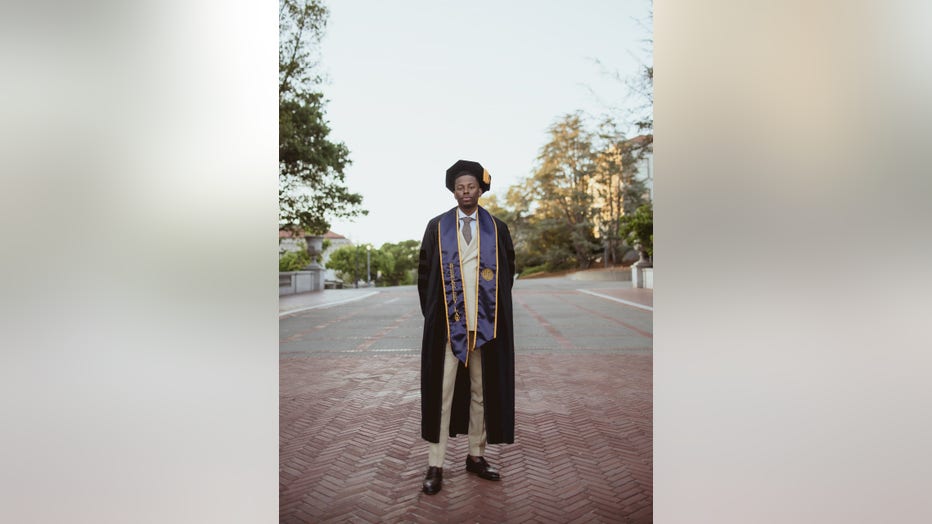 "The irony of the entire situation is that my mom actually applied to the joint MSW/JD program and was denied to the law school so she just pursued the MSW," the son explained. His mother would go on to use her MSW degree to work for several Bay Area counties in child welfare services. And later, she even returned to UC Berkeley as a lecturer.

"We are a UC Berkeley family through and through," Jefferson proudly told KTVU, noting his younger brother, Myles Jefferson, was currently a Cal Bear as an undergrad.

The day Savelle Jefferson was accepted to law school, his mother could hardly keep it together, overcome with joy and pride. "When I first found out I was admitted, I texted her a screenshot of the admittance and she ended up having to leave work because she was crying so hard," he recalled.

And for Piper-Jefferson, there's a lot to be proud of. During her son’s roughly three years as a law student at Berkeley, he has left his mark, serving as vice president of student government and managing editor of the school's Journal of Entertainment and Sports Law.

He was also co-president of the Coalition for Diversity at Berkeley Law. During his work with the group, he organized the largest For People of Color Conference ever held by the school. The conference brought together more than 300 students of color who were interested in attending law school, offering resources and guidance to help them through the application process. It's work that Jefferson has felt extremely passionate about during his time at Berkeley.

"My journey to law school was very very tough and I struggled immensely to find resources and fund the high costs associated with the admissions process," he said. "So I planned this event with the intent to ease some of these barriers for other students of color who may be interested in entering the profession. This was one of my main goals while attending Berkeley Law," Jefferson explained.

The list of recognition and awards he's received along the way is long. It includes being named the recipient of the Allen E. Broussard Phoenix Fellowship, which awards scholarships to two first year law students who have demonstrated a commitment to public interest and social justice. Jefferson was also awarded the Tyrone McGraw Memorial Scholarship by the Charles Houston Bar Association, as well as receiving Berkeley Law's Public Interest & Social Justice Certificate.

Up next for the new grad, he's set to take the California Bar Exam in July and planned to move to Los Angeles to work for the global law firm Morgan, Lewis & Bockius LLP as part of its labor and employment group.

And no doubt the path the young man has taken and the future accomplishments he’ll achieve will always circle back to the woman who's inspired him, encouraged him, and to whom he dedicated his hard earned degree.

"My mom has consistently been the number one motivator for me in terms of education. She always encouraged me to do well in school and to be a change agent," Jefferson said. "I truly owe this degree to her because I wouldn’t have made it this point without her, 26 years later I finally gave her the JD she always wanted." 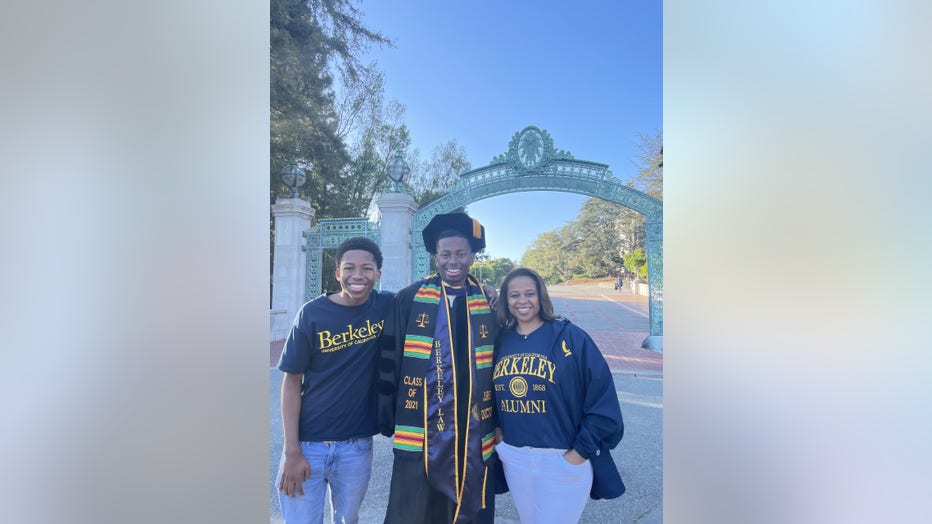