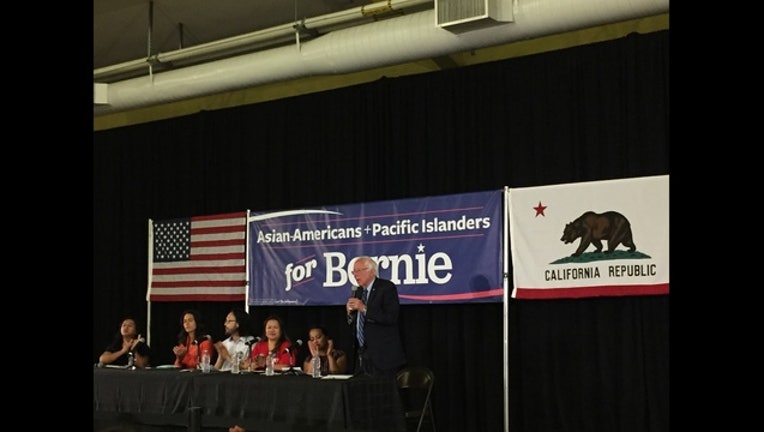 PALO ALTO (BCN)— Bernie Sanders continued his Bay Area campaign stops today with a community panel in Palo Alto, where he discussed his stance on major issues with Asian-American and Pacific Islander leaders.

Sanders was met with cheers and a standing ovation from roughly 200 supporters as he entered the Cubberley Community Center's Pavilion for a discussion with Rep. Tulsi Gabbard, D-Hawaii, and three other community members.

The panel was Sanders' second stop today as he works to gather support less than a week before the state's primary election on Tuesday, when he hopes to win more delegates to become the Democratic Party's presidential nominee.

The Vermont senator discussed what he would do to address issues surrounding foreign policy, climate change, health care, immigration, equal pay and inclusion.

Gabbard posed the question on what Sanders would do to keep the country out of "counterproductive interventionist wars."

Sanders pointed to his vote against going to war with former Iraq president Saddam Hussein, whose country invaded Kuwait, in the early 1990s.

He also opposed the Iraq War in 2002, contrary to his rival Hillary Clinton who supported going into combat.

If elected president, Sanders said he would develop a foreign policy based on coalition.

"Diplomacy is a much better approach than going to war," Sanders said.

Mark Ciubal, 28, of Roseville, was supportive of Sanders' "peaceful" approach to resolving conflict and getting to the root of a problem.

"War is very seldom the answer. There have been very few wars in the past that have been justifiable," Ciubal said.

Ciubal is a veteran with the U.S. Marines who served two deployments to Iraq and five years with the U.S. Air Force as a contractor working on intelligence analysis.

Timmy Lu, field director with the Asian Pacific Environmental Network, asked Sanders what he would do to address climate change as many Pacific Islanders consider themselves environmentalists who support government action as their homelands face rising sea levels and economic challenges.

The current "global environmental crisis" can become worse if nothing is done now, said Sanders, who called for more reliance on efficient energy sources other than fossil fuels.

The state could be faced with extreme weather disturbances, more floods, an extended drought and other consequences if it doesn't turn to other forms of energy, Sanders said.

"Anyone who chooses to bury their head in the sand and not face this reality is doing an enormous disservice to our children, grandchildren and future generations," Sanders said.

Jane Sandoval, a California Nurses Association board member, raised the question on Sanders' plan to bring Medicare for all and drew attention to the challenges minorities face when they can't receive medical attention from "culturally competent staff."

Health care is not a privilege but a right everyone should have, Sanders said. He's disappointed that the United States is the only major country that doesn't provide health insurance to the entire nation.

One action Sanders would take if elected president would be reducing prices for prescription drugs.

Aparna Shah, executive director of Oakland-based nonpartisan group Mobilize the Immigrant Vote, called on Sanders to elaborate on his "vision" on immigration as federal officials announced plans for a 30-day surge of raids targeting Central American women and children.

If elected president, Sanders said he would end current deportation policies and use his executive powers for comprehensive immigration reform and a path to citizenship if Congress fails to take any actions.

In response to a question about what he would do to help young Muslims feel more included in the country, Sanders said he would fight against "bigotry" including Islamophobia.

"I really appreciated the fact that he addressed this rise of racism and bigotry in general not just towards Muslims but for other communities as well," said Cupertino resident Hosai Mojaddidi.

Mojaddidi, 40, was excited when she able to shake Sanders' hand as he left the pavilion.

"He's someone who truly cares for the people and he demonstrates that. It's not just talk," Mojaddidi said of Sanders.

After the panel, Sanders made his way to a rally at the center's fields, where police advised the public to anticipate large crowds and substantial traffic in the area.

Classes were cancelled today at Foothill College's Middlefield campus, located within the community center, because of the increased security and traffic congestion resulting from the Sanders event, school officials said.

Sanders' final scheduled stop today is in Davis for a night rally at the Hutchison Intramural Field.