Rail strike: Why it's looming, and what it means

The stakes are so high that Congress is expected to intervene and impose contract terms on railroad workers.

OMAHA, Neb. - President Joe Biden on Monday asked Congress to intervene and block a railroad strike before next month’s deadline in the stalled contract talks, and House Speaker Nancy Pelosi said lawmakers would take up legislation this week to impose the deal that unions agreed to in September.

"Let me be clear: a rail shutdown would devastate our economy," Biden said in a statement. "Without freight rail, many U.S. industries would shut down."

In a statement, Pelosi said: "We are reluctant to bypass the standard ratification process for the Tentative Agreement — but we must act to prevent a catastrophic nationwide rail strike, which would grind our economy to a halt."

Pelosi said the House would not change the terms of the September agreement, which would challenge the Senate to approve the House bill without changes.

The September agreement that Biden and Pelosi are calling for is a slight improvement over what the board of arbitrators recommended in the summer. The September agreement added three unpaid days off a year for engineers and conductors to tend to medical appointments as long as they scheduled them at least 30 days in advance. The railroads also promised in September not to penalize workers who are hospitalized and to negotiate further with the unions after the contract is approved about improving the regular scheduling of days off. 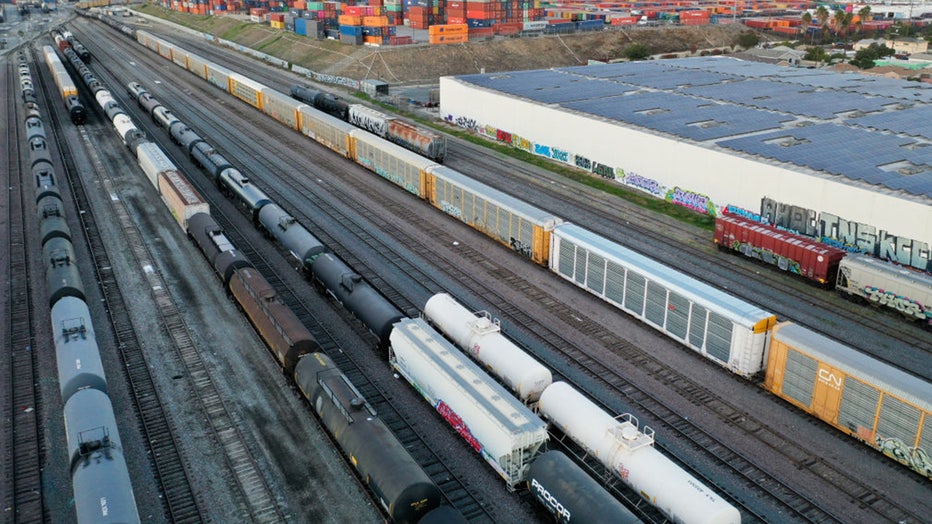 Hundreds of business groups had been urging Congress and the president to step into the deadlocked contract talk and prevent a strike.

Both the unions and railroads have been lobbying Congress while contract talks continue. If Congress acts, it will end talks between the railroads and four rail unions that rejected their deals Biden helped broker before the original strike deadline in September. Eight other unions have approved their five-year deals with the railroads and are in the process of getting back pay for their workers for the 24% raises that are retroactive to 2020.

If Congress does what Biden suggests and imposes terms similar to what was agreed on in September, that will end the union’s push to add paid sick time. The four unions that have rejected their deals have been pressing for the railroads to add that benefit to help address workers’ quality of life concerns, but the railroads had refused to consider that.

Biden said that as "a proud pro-labor president" he was reluctant to override the views of people who voted against the agreement. "But in this case — where the economic impact of a shutdown would hurt millions of other working people and families — I believe Congress must use its powers to adopt this deal."

Biden's remarks and Pelosi's statement came after a coalition of more than 400 business groups sent a letter to congressional leaders Monday urging them to step into the stalled talks because of fears about the devastating potential impact of a strike that could force many businesses to shut down if they can’t get the rail deliveries they need. Commuter railroads and Amtrak would also be affected in a strike because many of them use tracks owned by the freight railroads.

The business groups led by the U.S. Chamber of Commerce, National Association of Manufacturers and National Retail Federation said even a short-term strike would have a tremendous impact and the economic pain would start to be felt even before the Dec. 9 strike deadline. They said the railroads would stop hauling hazardous chemicals, fertilizers and perishable goods up to a week beforehand to keep those products from being stranded somewhere along the tracks.

"A potential rail strike only adds to the headwinds facing the U.S. economy," the businesses wrote. "A rail stoppage would immediately lead to supply shortages and higher prices. The cessation of Amtrak and commuter rail services would disrupt up to 7 million travelers a day. Many businesses would see their sales disrupted right in the middle of the critical holiday shopping season."

A similar group of businesses sent another letter to Biden last month urging him to play a more active role in resolving the contract dispute.

"No one benefits from a rail work stoppage — not our customers, not rail employees and not the American economy," said AAR President and CEO Ian Jefferies. "Now is the appropriate time for Congress to pass legislation to implement the agreements already ratified by eight of the twelve unions."

Business groups that have been pushing for Congress to settle this contract dispute praised Biden’s move.

"The Biden administration’s endorsement of congressional intervention affirms what America’s food, beverage, household and personal care manufacturers have been saying: Freight rail operations cannot shut down and imperil the availability and affordability of consumers’ everyday essentials," said Tom Madrecki, vice president of supply chain for the Consumer Brands Association. "The consequences to consumers if a strike were to occur are too serious, especially amid continued supply chain challenges and disruptions."

Clark Ballew, a spokesman for the Brotherhood of Maintenance of Way Employes Division, which represents track maintenance workers, said before Biden's announcement that the union was "headed to D.C. this week to meet with lawmakers on the Hill from both parties. We have instructed our members to contact their federal lawmakers in the House and Senate for several weeks now."

The U.S. Chamber of Commerce’s Neil Bradley said Biden was correct in advocating for the deal already reached. "Congress must do what it has done 18 times before: intervene against a national rail strike," Bradley said in a statement, and he called Congress enforcing the deal agreed to by railroads and union leaders the "only path to avoid crippling strike."

The railroads, which include Union Pacific, BNSF, Norfolk Southern, CSX and Kansas City Southern, wanted any deal to closely follow the recommendations a special board of arbitrators that Biden appointed made this summer that called for the 24% raises and $5,000 in bonuses but didn't resolve workers' concerns about demanding schedules that make it hard to take a day off and other working conditions. That's what Biden is calling on Congress to impose.