WASHINGTON - President Joe Biden on Monday signed a pair of executive orders aimed at promoting gender equity in the U.S. as the world marked International Women’s Day — a global day celebrating the social, economic, cultural and political achievements of women.

One order establishes a gender policy council within the White House and the other orders a review of Trump-era changes to Title IX, the federal regulation on how colleges and universities handle allegations of sexual assault.

The White House said in a statement that the Biden administration is "committed to honoring women by investing in their opportunity, security, and wellbeing."

Harris, who also spoke, made history as the country’s first Black and first female second-in-command. Their remarks honored two women who have risen in the ranks in the U.S. Army.

"While it has only been five years since all combat jobs have opened to women, women have been in the line of fire risking their lives to protect our nation long before that," Harris said. "Recruiting more women to our military, adjusting policies to retain more women, enforcing policies to protect women and ensure they are heard and advancing more women on fair and equal footing with, without any question, make our nation safer. And that’s the work ahead."

Earlier in the day, the first executive order Biden signed establishes the White House Gender Policy Council, something his transition team announced his plans to create the council before he took office. The new council is tasked with helping push gender equity on the administration's domestic and foreign policy efforts.

Former President Donald Trump disbanded an office specifically focused on women’s issues created during the Obama administration that was called the White House Council on Women and Girls. While the new council is a resurrection of the Obama-era one, one administration official said that giving it a new name was an acknowledgment that inequities can affect people of all genders.

Still, the official said the council will primarily focus on issues facing women and girls because of "disproportionate barriers" they face.

Some of the issues the council will focus on include combating sexual harassment, addressing structural barriers to women's participation in the workforce, decreasing gender wage and wealth gaps, addressing caregiving issues that have disproportionately impacted women and responding to gender-based violence.

"My Administration is also committed to ensuring that women are represented equally at all levels of the federal government. That starts with Vice President Harris, who broke through a barrier that stood for more than two centuries," Biden’s statement said. 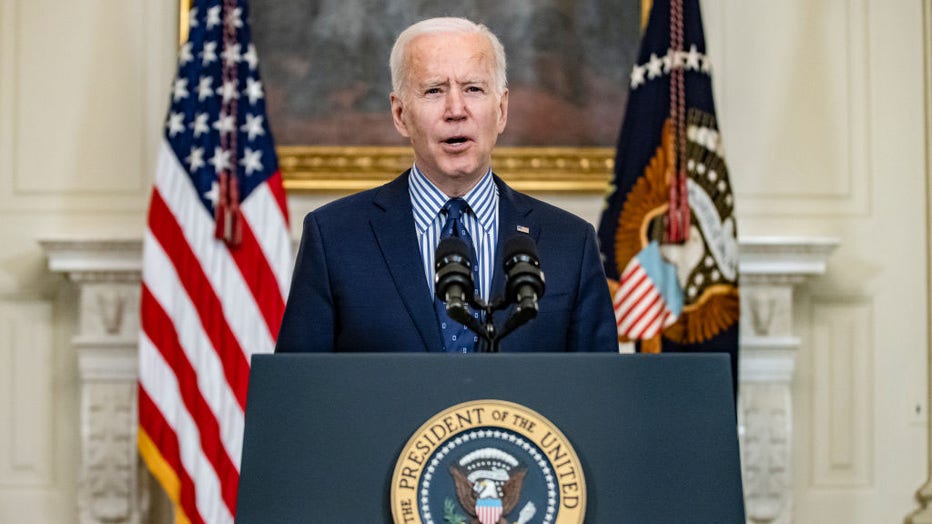 FILE - President Joe Biden speaks from the State Dining Room following the passage of the American Rescue Plan in the U.S. Senate at the White House on March 6, 2021 in Washington, D.C. (Photo by Samuel Corum/Getty Images)

The second executive order Biden signed Monday ordered his administration to review Trump administration rules around campus sexual assaults that bolstered the rights of the accused and narrowed the scope of cases colleges must address.

In the new order, Biden directed the Department of Education to review policies implemented by the Trump administration, including changes to Title IX regulations that prohibit sex discrimination in federally-funded institutions.

Biden directed the agency to review all policies "that are or may be inconsistent" with the objective to prevent sex discrimination in education.

Trump’s education secretary, Betsy DeVos, in 2018 rescinded an Obama-era administration standard in cases of reported sexual assault from requiring a "preponderance of evidence" — meaning it is more likely than not that sexual harassment or violence occurred — to "clear and convincing evidence."

The DeVos changes reduced the liability of colleges and universities for investigating sexual misconduct claims and bolstered the due process rights of the accused, including the right to cross-examine their accusers through a third-party advocate at campus hearings.

With the Education Department review, Biden's intent is to set policies that help ensure students have an environment that’s free from sexual harassment and without discrimination on the basis of sexual orientation or gender identity, according to one White House official who briefed reporters on the orders.

Biden had promised during his campaign to strengthen Title IX if he won the White House, and the order directing the review of Title IX could pave the way to a major shift in how colleges handle allegations of sexual misconduct moving forward.

The first lady said that the women's stories make it easy to think of them as "mythical heroes or angels among us" but that they're also humans who want to enjoy life's simple pleasures.

"Some of these women have spent their lives fighting for their cause. Others are just starting out on a journey they didn’t ask for," Biden said.

"Some were called to service, and some couldn’t escape it," she said. "They are fighting for their own lives and for their children. They want to right the wrongs of our past, to build a brighter future for everyone. They aren’t immune to fear. No one is."

She added that in the course of ordinary lives, each of the women made "an extraordinary choice."