WASHINGTON - The Occupational Safety and Health Administration doesn’t make many headlines. Charged with keeping America’s workplaces safe, it usually busies itself with tasks such as setting and enforcing standards for goggles, hardhats and ladders.

But President Joe Biden this month threw the tiny Labor Department agency into the raging national debate over federal COVID-19 vaccine mandates. The president directed OSHA to write a rule requiring employers with at least 100 workers to force employees to get vaccinated or produce weekly test results showing they are virus free.

The assignment is sure to test an understaffed agency that has struggled to defend its authority in court. And the legal challenges to Biden’s vaccine mandate will be unrelenting: Republican governors and others call it an egregious example of government overreach. South Carolina Gov. Henry McMaster vowed to fight the mandate "to the gates of hell.’’

"There are going to be some long days and nights for the folks who are drafting this rule," says labor lawyer Aaron Gelb, a partner in the Chicago office of Conn Maciel Carey. "It’s an interesting time to be an OSHA lawyer for sure." 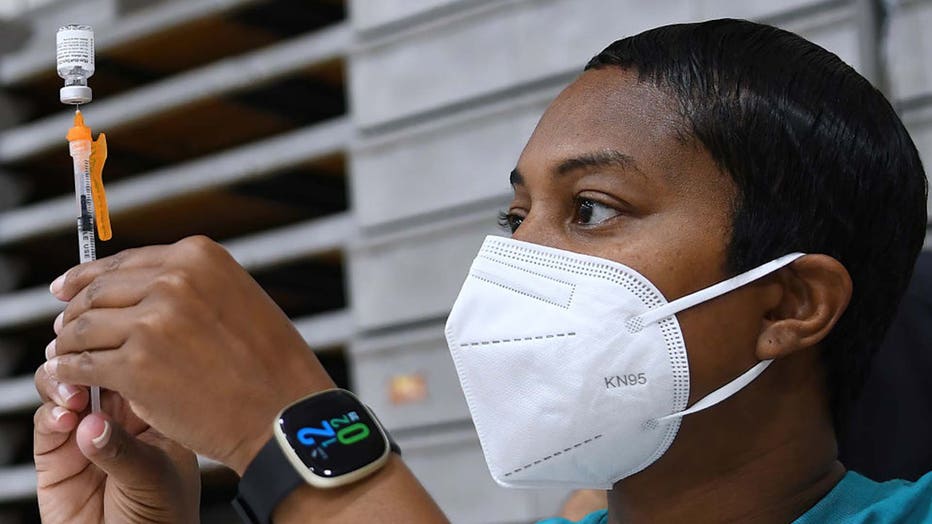 FILE - Nurse fills a syringe with a dose of the Pfizer COVID-19 vaccine at a vaccination clinic. (Paul Hennessy/SOPA Images/LightRocket via Getty Images)

When Congress created OSHA 50 years ago to police workplace safety, 38 workers were dying on the job every day. Now that figure is closer to 15 — even though the American workforce is has more than doubled in the interim. OSHA writes rules designed to protect workers from dangers such as toxic chemicals, rickety scaffolding and cave-ins at construction sites.

"The hazard in this case is the infectious worker," says epidemiologist David Michaels, OSHA director in the Obama administration. "This rule will tell employers: You have to take steps to make sure potentially infectious workers don’t come into the workplace."

OSHA will use its power under a 1970 law to issue an expedited rule - called an "emergency temporary standard" or ETS -- and bypass its own cumbersome rulemaking process, which typically takes nearly eight years from beginning to end, according to a 2012 study by the Government Accountability Office. To fast-track the rule, OSHA must show that it is acting to protect workers from a "grave danger.’’

The mandate the White House announced this month will cover 80 million employees — nearly two-thirds of the private sector workforce. Employers that don't comply could face penalties of up to $13,600 per violation.

Businesses are anxious to see how OSHA handles questions like: Which vaccines and tests are acceptable and which aren’t? How should employers handle requests from employees who seek exemptions on medical or religious grounds? Who’s going to pay for the testing? Some employers won't be happy if they have to foot the bill for employees who refuse free vaccinations.

Once it's out, the rule would take effect in 29 states where OSHA has jurisdiction, according to a primer by the law firm Fisher Phillips. Other states such as California and North Carolina that have their own federally approved workplace safety agencies would have up to 30 days to adopt equivalent measures. The OSHA rule would last six months, after which it must be replaced by a permanent measure.

"There are going to be legal challenges brought to whatever rule," attorney Gelb said. "OSHA is going to really devote time and effort to drafting a rule that will survive those legal challenges." He predicts the rule won't be published in the Federal Register until November.

The agency is already often stretched thin. Even including what OSHA calls its "partners" at state workplace safety agencies, there are only 1,850 inspectors to oversee 130 million workers at 8 million workplaces. "It is not helpful to have a critical agency like this understaffed, particularly because of moments like this," says Celine McNicholas, director of government affairs at the left-leaning Economic Policy Institute.

Until June, when it issued a COVID-related ETS covering the health care industry, OSHA hadn’t implemented an emergency rule since 1983. Overall, it has issued 10. But courts have overturned four and partially blocked a fifth, according to the Congressional Research Service.

Michaels, now a professor of public health at George Washington University, says the "grave danger" is obvious in a country battling a pandemic that has killed more than 650,000 Americans. "OSHA’s plan very clearly fits those requirements," he says. "And I’m not worried about a court saying it doesn’t."

Many employers may welcome the mandate. They wanted to require vaccines but feared alienating their workers who resist being coerced into getting inoculated. "Most employers in my view should greet this with relief," says McNicholas, former special counsel at the National Labor Relations Board. "This gives them a roadmap of exactly what they need to do."

Then again, at a time when companies are posting job openings faster than applicants can fill them, some big employers fear losing vaccine-resistant employees to smaller businesses that aren't covered by the mandate. "It may actually help these smaller businesses who are struggling to attract employees," says Nicholas Hulse, a Fisher Phillips labor lawyer based in Charlotte, North Carolina.

RELATED: Army: ‘Relief of duties, discharge’ possible for those who refuse COVID-19 vaccine

Hulse says the mandate is "going to be difficult to enforce." OSHA, he says, likely will rely less on its own inspectors uncovering violations and more on complaints from insiders — workers who grow "frustrated either with the employer for not implementing it or with fellow employees who are not following the mandate."

Former OSHA chief Michaels calls Biden's mandate "a very good first step. But we need more." He wants to see the rules expanded to smaller employers. "Until we stop this, losing hundreds of people every day to this disease, we’ll never get back to any sort of normalcy," he says.

More than 175 million Americans are fully vaccinated. But 80 million of those eligible for inoculation haven't yet received their first shot, the White House says.

The Biden administration is also requiring vaccinations for federal workers and contractors and for 17 million healthcare workers. Those initiatives plus the vaccination or testing mandate for big employers should add 12 million to the ranks of the vaccinated by March 2022, Goldman Sachs estimates.

"Most employers will voluntarily meet the standards because that’s what they do with all OSHA rules," Michaels says. "Large employers in particular, they have (human resources) teams, they have attorneys who tell them: ‘This is what the law says and this is what we have to do' ... I think most employers are going to do the right thing here, and we’ll see very high levels of compliance pretty quickly."