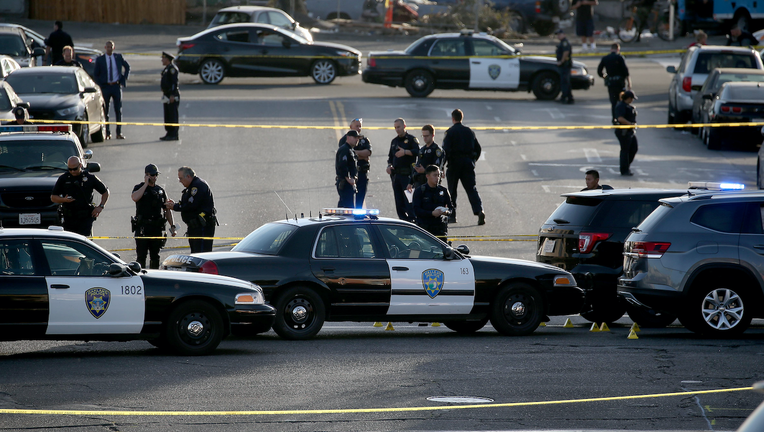 SACRAMENTO, Calif. - One of the hallmark bills of California lawmakers’ policing reform efforts cleared a hurdle Wednesday but faces tough going as the Legislature races to adjourn for the year on Monday.

The bill would allow for permanently stripping away the badges of officers found to have committed serious misconduct and ending what Democratic Sen. Steven Bradford called the “wash, rinse and repeat cycle” of officers moving from department to department even if they have a questionable history.

His bill is among 10 policing reform efforts that Democratic lawmakers promoted as a package on Wednesday and include banning the use of carotid or chokeholds and restricting the use of tear gas and rubber bullets against peaceful protesters.

“We were quick to show up for photo ups, but when it comes to doing the real work some of them are not true believers. This shouldn’t be a moment, but a true movement, and I hope they find the courage to do the right thing.”

Bradford’s bill would take away some of officers’ legal immunity, a change opposed by law enforcement organizations that otherwise support the concept of ending the careers of bad officers. Those organizations also said his proposal lacks due process and the state disciplinary board would be biased against police.

Assembly leaders had to twist the arms of nearly a dozen Democratic lawmakers to even get the bill to the Judiciary Committee. It advanced Wednesday to the full Assembly on a 7-3 party-line vote, with one Democratic lawmaker abstaining.

The dilemma of the good cop: Calling out wrongdoing can end an officer’s career

Bradford acknowledged that his measure faces an uncertain future, even in the Legislature overwhelmingly controlled by Democrats. He called out some colleagues who had prominently knelt outside the Capitol in memory of George Floyd, whose death sparked weeks of protests and calls for reform after he was killed by Minneapolis police in May.

“We were quick to show up for photo ups, but when it comes to doing the real work some of them are not true believers,” Bradford said. “This shouldn’t be a moment, but a true movement, and I hope they find the courage to do the right thing.”

Many other states allow independent investigations of shootings by police, as proposed in another bill in Democrats’ package, and “20 other states have much more transparency” when it comes to publicly disclosing police records of wrongdoing, said Democratic Sen. Nancy Skinner. She is carrying a bill that would expand her 2019 law that lifted some of the nation’s most secretive police records restrictions.

“Unfortunately, we hide behind our progressive reputation,” Skinner said. “When it comes to real police accountability and police reform, we are behind.”

“With having an unfair panel, there’s an unfair appeals process that would not meet minimum standards of due process in any court in America,” Mastagni said.

Bradford said the makeup is needed to restore community trust in police and the disciplinary process.

Several lawmakers and advocates said police associations showed they aren’t sincere by declaring support for many of the reform concepts but now opposing the bills themselves.

Several Democratic lawmakers supported Bradford’s bill despite having their own concerns with details they said can be fixed later.

“It’s clear there will be some unintended consequences” that can be corrected in future legislation, said Assemblywoman Eloise Gómez Reyes. “We don’t want those who have been the good cops to suffer because of the bad cops.”