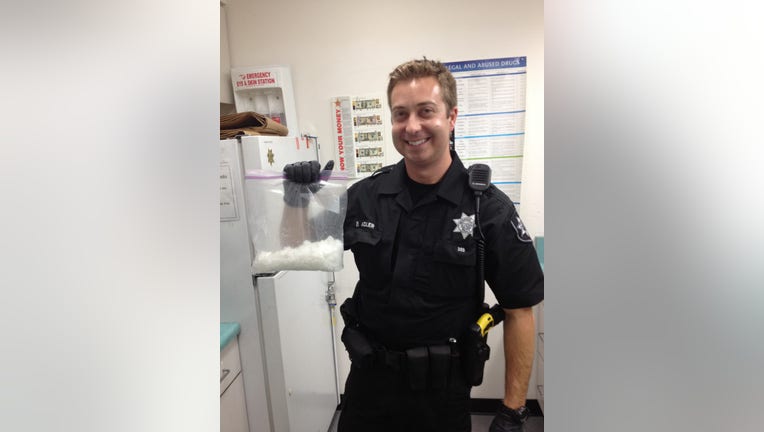 Ryan Adler was a Redwood City police officer until he filed a federal lawsuit against them and was paid a $150,000 settlement in 2015.

REDWOOD CITY, Calif. - During his decade-long career in law enforcement, Ryan Adler said he witnessed racism, homophobia, and excessive bullying among his fellow officers in the Redwood City Police Department. But when he decided to speak up, he was labeled a rat and a snitch and was eventually forced out of the department.

“The real problem that we have right now is that we have a system that does not allow good cops to come forward,” Adler said. “You have a system where if you complain, you’re ostracized, and you’re shunned, and you might not get cover on that next call when you need help.”

For example, nearly a decade ago, Adler said that an officer would talk about colleagues being “thrifty,” and then called them “F--ing Jews.”

Adler said the same officer, who has now been promoted to sergeant, would intimidate him by clicking an unloaded gun near the back of his head to scare him.

“He would take his gun out of the holster...and stand behind me,” Adler said. “And he would rack the slide ….and he would dry fire ...and it would go ‘click.’

Another time in 2011, Adler said his colleagues went on a domestic violence call. The woman was crying about how her husband cheated on her. The officers thought that was funny and made an audio clip of her crying. Adler said the officer then emailed the clip to everyone on the shift so that they could turn her weeping voice into a ringtone.

Adler said he didn’t speak up at this point because it was early in his career.

“When you’re in a situation and you want to speak up, it’s hard to know when to do it,” he said. “You learn really quickly there are things you can talk about and things you can’t. We were expected to accept it, or chuckle with this inner circle of officers.”

Finally, Adler said he couldn’t take it anymore. In 2013, he went to Human Resources, where, the day after he complained, he was told he’d have to go on medical leave, even though he had been working as a detective with a slightly injured shoulder for months before that.

He eventually sued the department in federal court for retaliation, saying he was essentially forced out of his job. He received a $150,000 settlement in 2015.

And while these examples all happened years ago, Adler said he is speaking up now, as heightened focus is being paid to reforming police departments across the country in the wake of the death of George Floyd in Minneapolis.  Redwood City is far from the only city in the country whose police force has faced similar accusations of bigotry, sexism and toxic masculinity. And while these behaviors are usually not criminal, both reform advocates and police chiefs alike say they are indicative of officers’ attitudes and prejudices toward others and the wider community that they serve. Adler said he believes his insights as a former officer - one who was maligned for calling out injustices - can help bring light to these systemic, cultural problems, especially as leaders are vowing that they, too, want change.

"The timing is right to speak now," he said.

“This isn’t just Redwood City. Don’t kid yourself. It’s sad. But this is not just at one police department. It’s throughout the entire country.”

Adler is not the only officer who has complaints with the department.

After speaking with 16 sources for this story, some other examples include:

“If they see something and they don’t come forward, now they are being complicit. If you turn a blind eye, it hurts all of us.”

Chief says he has high standards

In an interview, Redwood City Police Chief Dan Mulholland declined to comment on Adler’s case or the specifics of any of the other allegations.

And KTVU is choosing not to identify any of the officers cited in these examples because there have been no criminal charges brought against them or sustained findings made public about their alleged behavior.

But he said he believes that officers in his department are clearly instructed of the rules, and if they are broken, they will be dealt with accordingly.

Mulholland, who has been at the department for 37 years and chief since 2018, also insisted that “law enforcement has gone a long way. We’ve progressed in the last 30 years right along with society.”

He asserted that in his department, “folks are actually encouraged if they have concerns to bring them to the administration. Or they can bypass mid-level and go directly to Human Resources. There is accountability at all levels.”

Since he took over the department two years ago, Mulholland said his officers must be above reproach.

“I have higher standards,” he said.

That goes for officers who see bad behavior and don’t report it, he said.

“If they see something and they don’t come forward, now they are being complicit,” Mulholland said. “If you turn a blind eye, it hurts all of us.”

He said he knows plenty of officers who never made it out of probation because they never rose above the “frat or high school locker room where it’s all fun and games.”

If someone shows any type of character flaw during the hiring process, they will not join the other roughly 90 other Redwood City police officers, he said.

Mulholland said he has personally put “two to three officers on the pathway to termination” during the 2 ½ years he’s been chief.  He would not disclose how many times he has disciplined officers, and for what, citing privacy laws.

“Rather, the focus should be on the rotten orchard, and whether the police department has systemic problems. If officers know the rules and that discipline will be meted out for not following them, then the ‘Code of Silence’ will be less.”

Although the Redwood City Police Department is not known for being a hotbed of police misconduct in a quiet Silicon Valley suburb where the median home price is $1 million, Adler’s experience there was not uncommon, according to interviews with more than a dozen people, including 10 former members of the department. Redwood City is home to nearly 90,000 residents about 30 minutes from San Francisco.

“This isn’t just Redwood City,” said LaDoris Cordell, a retired Santa Clara County judge and the city of San Jose’s former independent police monitor. “Don’t kid yourself. It’s sad. But this is not just at one police department. It’s throughout the entire country.”

Cordell pointed out that Adler’s story illustrates “the dilemma of the good cop.”

She said good officers really only have three options: They can speak out, but if they do, they “will be pilloried by your own and forced out.” Two, they can stay silent. Or three, if they stand up for what they believe is right, “they’ll have to quit their career.”

Cordell also said it’s a myth that police departments overall are full of good cops and there only “one or two bad apples” in each one.

“The problem lies in the culture of policing,” she said. “These are the unwritten rules that everyone understands. The culture can even make the good officers become bad because if they want to remain, they have to be silent, and then they’re part of the problem.”

Other departments face pockets of racist cultures, too. Just this month in San Jose, four officers were put on leave after some of their slurs against Muslims were spotted in a private Facebook group for current and former officers. No one spoke up about this within the department, however. The officers were outed anonymously in a blog post on Medium.

Sanja Kutnjak Ivkovich, a professor of criminal justice at Michigan State University who co-wrote a paper on the ‘Code of Silence’ with a grant from the U.S. Department of Justice, explained that police departments must hold bad cops accountable or the good ones will leave.

“The focus shouldn’t be on the few bad apples,” Ivkovich said. “Rather, the focus should be on the rotten orchard, and whether the police department has systemic problems. If officers know the rules and that discipline will be meted out for not following them, then the ‘Code of Silence’ will be less.”

Some say times have changed, others question record of transparency

To some, times have changed since Adler’s era.

“I have seen in this administration, under Mulholland, that misconduct is adequately addressed and there is not a culture from the top of covering up for bad actions,” said David Stahler, a retired detective.

Retired officer William “Chris” Winn also said that his “overall assessment was that this was a good place to work.”

Multiple officers told KTVU that despite Mulholland’s good intentions, some of the problems still exist in Redwood City.

While some of the old guard has left the department, many say Mulholland has not cleaned house swiftly enough. For instance, the officer referenced in Adler’s lawsuit has been disciplined, multiple sources said, but he has also since been promoted to sergeant. 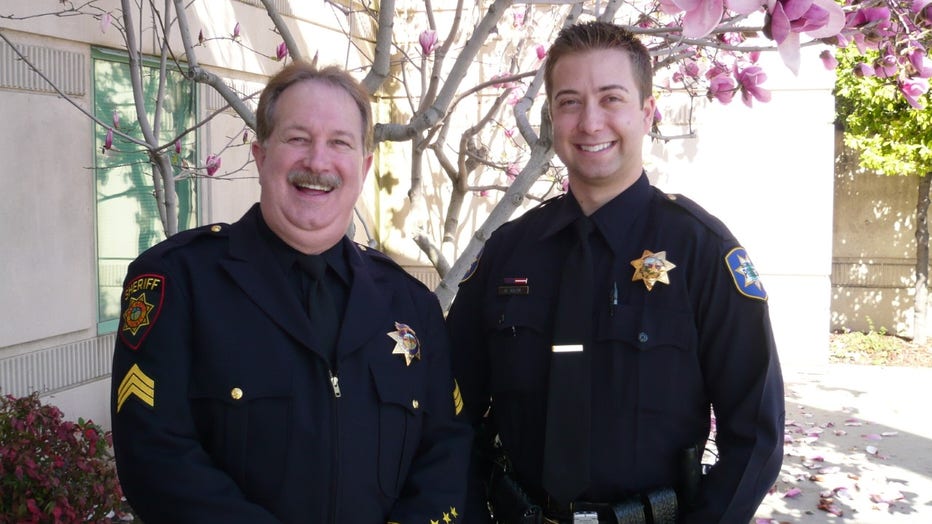 Ryan Adler comes from a family of police officers. He is pictured here with his father, a former Redwood City police officer. His brother was a former prosecutor in Santa Clara County.

But the department’s own records raise questions as to whether Redwood City PD has held officers accountable.

In 20 years of record-keeping, Redwood City has never found any sustained allegations against officers who lied or were found guilty of sexual assault -- two categories of behavior that are now public under the transparency law, SB 1421, according to KTVU’s review of the department’s records.

Under current police transparency laws, allegations and findings of racism and demeaning sexual behavior do not have to be made public.

A bill, SB 776, proposed by state Sen. Nancy Skinner (D-Berkeley), would change that.

The bill, introduced in June, seeks to provide access to all disciplinary records involving officers who have engaged in racist, homophobic, or anti-Semitic behavior, or actions against any other protected class, as long as the complaints are not frivolous. The bill would also require access to these records even when an officer resigns before the agency’s investigation is complete.

As for Adler, he implores any legislator to come up with a plan to make these records open to the public.

For now, he hopes his story will shed some light on what he sees as the dark side of police culture and bring about much-needed change.

He said he first became a police officer because he is “civic-minded” and that even though it’s years later, he cares about his past career and wants there to be a bright future for policing.

“I got into this to make a difference,” he said.