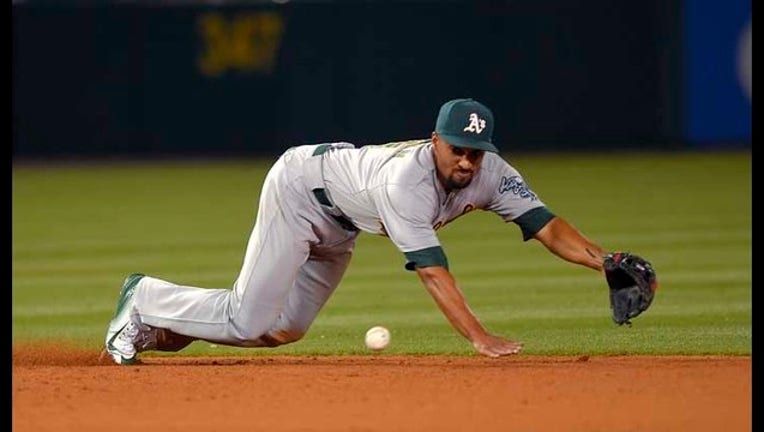 ANAHEIM, Cailf. (AP) -- Sonny Gray outpitched Jered Weaver with seven innings of two-hit ball, and Billy Butler homered during a five-run seventh inning that carried the Oakland Athletics to a 9-2 victory over the Los Angeles Angels on Wednesday night.

Gray (2-0) struck out seven, escaped a bases-loaded jam in the third and retired his last 14 batters. The right-hander faced the Angels in three of his final eight starts last season, going at least seven innings each time.

Eric Sogard greeted Fernando Salas (0-1) with a leadoff single in the seventh, stole second and advanced on Marcus Semien's sacrifice bunt before Stephen Vogt delivered the go-ahead run with a single through the right side off Cesar Ramos with one out and runners at the corners.

Vinnie Pestano came in to relieve and threw a wild pitch to Butler that allowed Sam Fuld to score. Butler drove a 3-1 pitch to center field for his 14th career homer against the Angels, and Brett Lawrie's run-scoring infield hit capped the rally.

The A's tacked on three more runs in the eighth and finished with 18 hits. They have outscored their opponents 62-5 in their eight victories, and have been outscored 56-21 in their eight losses — including a 14-1 drubbing Tuesday night.

Oakland stole three more bases, making the A's 10 for 10 over their last eight games — after playing their first eight games without attempting a stolen base.

Weaver threw 25 of his 93 pitches in the first inning and was done after six, allowing a run and eight hits with three strikeouts and no walks. The three-time All-Star, who won 18 games last year, is 0-2 in four starts with a 5.24 ERA. It's the first time in Weaver's 10 big league seasons that he was winless in his first four outings.

The score was tied 1-all in the third when the Angels loaded the bases on a one-out single by Johnny Giavotella and two walks. But Gray struck out Albert Pujols on a pitch in the dirt and retired David Freese on a popup.

Pujols began last season 0 for 13 in bases-loaded situations. The three-time NL MVP, who has 12 grand slams among his 523 career home runs, finished 3 for 18 with nine RBIs under those circumstances in 2014.