Birds and wildlife are bearing the brunt of the massive oil spill off the coast of Huntington Beach. John Fleming, Ph.D., a senior scientist at the Center for Biological Diversity discusses how serious the impact will be on local wildlife on Good Day LA.

HUNTINGTON BEACH, Calif. - Since a pipeline spilled crude off the California coast this weekend, only a handful of oiled birds have been recovered in what environmental advocates said could be a hopeful sign for the region’s wildlife.

But they said it’s too soon to know how many seabirds, marine mammals and other animals will ultimately be affected by the oily film covering marsh areas and floating on the ocean — or for how long.

Oiled seabirds are often among the earliest victims of a spill because gobs of crude washing up onto the sand and wetlands can clump their feathers together, leaving them chilled by the cold ocean water.

Oiled seabirds are often among the earliest victims of a spill because gobs of crude washing up onto the sand and wetlands can clump their feathers together, leaving them chilled by the cold ocean water. Sea mammals and fish that ingest oil can also be affected later on, while damage to coastal wetlands where fish go to spawn can erode critical habitat for scores of species, environmental experts said.

Oil has been washing up on Southern California beaches and wetlands since a suspected leak in an underwater pipeline sent sent 126,000 gallons (572,807 liters) of heavy crude into the ocean waters. The spill fouled the sands of famed Huntington Beach, known as Surf City USA, and could keep some beaches closed for weeks or longer. It also prompted state officials to shut down fishing on a long stretch of the Orange County coast.

At nearby Talbert Marsh in Huntington Beach, a fish jumped and splashed in oily water while two pelicans moved across the surface nearby. The wetland area right off the beach has been blocked off to the public and barriers laid across the surface of the water to try to prevent the foul-smelling crude from spreading.

Michael Ziccardi, director of the Oiled Wildlife Care Network, said four oiled birds have been recovered since the spill, one that had to be euthanized. The group has fielded about 20 calls from residents reporting oiled animals and dispatches teams to assess and, if necessary, capture and treat the birds, he said. 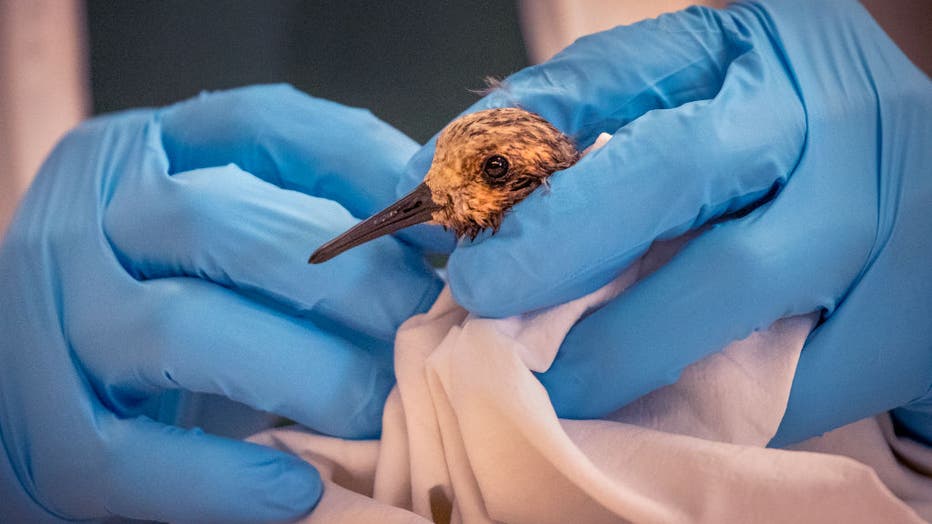 Ziccardi said the relatively few reports of oil-laden wildlife leave him "cautiously optimistic" about the extent of the spill’s impact. "It’s much better than we had feared," he told reporters on Monday.

But in other offshore oil spills the largest number of oiled birds have been collected two to five days out from the incident, Ziccardi said, so it’s too soon to know how big the impact will be. Teams are out searching for affected animals in the spill area and beyond, he said, adding that birds that are oiled but can still fly should be captured by trained experts so they can be treated and released.

Marine mammals can also be affected by a spill but more often the issues they face are long-term due to ingestion or inhalation of oil, he said. Harbor seals and sea lions, for example, don’t rely on their fur to stay warm and so they don’t typically suffer as many external effects from a spill as birds, he said.

The impact on these animals will take much longer to understand, he said, adding that researchers are just starting to learn about some of these long-term effects from the 2010 Deepwater Horizon oil spill.

Kareiva, of the aquarium, said fish and shellfish could face chronic impacts over time from ingesting the oil akin to being poisoned. But the biggest damage might be in the wetlands, a critical habitat for so many species, he said.

"We can expect the ecosystem to be severely damaged, but also, frankly, to eventually recover, in maybe five to 10 years, who knows the timeframe," Kareiva said, adding that the timetable will depend on factors including water temperature. "It’s not going to be permanent."

Chad Nelsen, chief executive of Surfrider Foundation, said much of the rocky coastal habitat teeming with wildlife so far seem to have been spared the thick globs of oil washing up on beaches further north, and calm winds also mean some oil could potentially evaporate due to heat and sun that might otherwise reach the shore.

"So far, it doesn’t seem to have hit a lot of the rocky coastal habitat, which is a blessing," said Nelsen, whose group works on ocean protection.

But so far is still far to soon to know the environmental impact of this spill, said David Pettit, a senior attorney for Natural Resources Defense Council who worked on the Deepwater Horizon and other spills. There likely will be more wildlife affected in the near term and impacts that go undetected for much longer until they can be studied marine biologists, he said.

"At this point, you just have no idea what the nature of the damage is," he said.