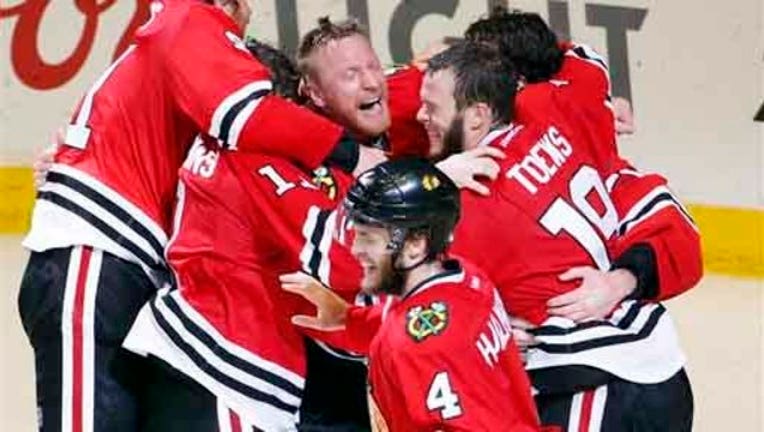 CHICAGO (AP) — Showing off their grit and determination, the Chicago Blackhawks finally put away the Tampa Bay Lightning in the Stanley Cup Final.

The city of broad shoulders, strong enough to carry the silver trophy once again. A Windy City party 77 years in the making.

Duncan Keith scored in the second period and directed a dominant defense that shut down Tampa Bay's high-scoring attack, and the Blackhawks beat the Lightning 2-0 in Game 6 on Monday night for their third NHL title in the past six seasons.

Patrick Kane had a goal and an assist, helping the Blackhawks clinch the Cup on home ice for the first time since 1938. Corey Crawford, who was pulled from Chicago's first-round series against Nashville, had 25 saves in his fifth career playoff shutout.

Keith was a unanimous selection for the Conn Smythe Trophy for playoff MVP after he finished with 21 points while playing over 700 minutes in a grueling postseason.

It was an appropriate conclusion to a series full of near misses and close calls that had fans in Chicago and Tampa Bay on the edge of their seats for almost two weeks. It was only the second final to begin with five one-goal games, and no team enjoyed a two-goal advantage until an open Kane buried a perfect pass from Brad Richards at 14:46 of the third.

It was Kane's first goal of the final, and it touched off a wild celebration by the frenzied crowd of 22,424, who broke out more chants of "We want the Cup! We want the Cup!"

"I'd say you have a dynasty," NHL Commissioner Gary Bettman told the cheering crowd as he presented the trophy to the grinning Blackhawks.

Ben Bishop kept the Lightning in the game with 30 saves, fighting through some sort of lower-body injury that kept him out of Game 4. Led by Bishop and big defenseman Victor Hedman, the Lightning allowed just 13 goals in the series, but it wasn't enough against the unflappable Blackhawks.

Tampa Bay star Steven Stamkos finished the playoffs with an eight-game scoring drought that likely will chase him into the offseason. He rung the inside of the crossbar on a near miss at 7:50 of the first and was stoned by Crawford on a breakaway 58 seconds into the middle period.

The pair of missed opportunities for one of the NHL's most gifted scorers looked even more costly when the Blackhawks got on the board in the second.

Keith got a nice pass from Kane in the middle and shot it around Tampa Bay center Cedric Paquette. Bishop stopped his first try, but Keith kept skating past Paquette and flipped in the rebound at 17:13.

Keith then skated with his arms out and yelled before he was mobbed by his teammates near the boards.

Crawford threw his gloves into the air as the final seconds ticked off, and a sea of red and black that braved a dangerous line of thunderstorms to pack the United Center erupted in pure joy. Kane pumped his right arm as Crawford approached for a big hug, and the goaltender then wrapped his arms around Keith after they helped limit the league's highest-scoring team in the regular season to 10 goals in the final.

It was the first Stanley Cup for Kimmo Timonen, who has said he plans to retire. The 40-year-old defenseman was acquired in a trade with Philadelphia in February after he missed the start of the season while recovering from blood clots in his leg and lungs.

After captain Jonathan Toews got the trophy from NHL Commissioner Gary Bettman, he handed it right to Timonen, who proudly hoisted it into the air.

The Lightning had Nikita Kucherov back in the lineup after the forward crashed into the Chicago goal during the Blackhawks' 2-1 victory Saturday night and missed the last part of Game 5. But Tampa Bay's high-scoring triplets line never got untracked in the final.