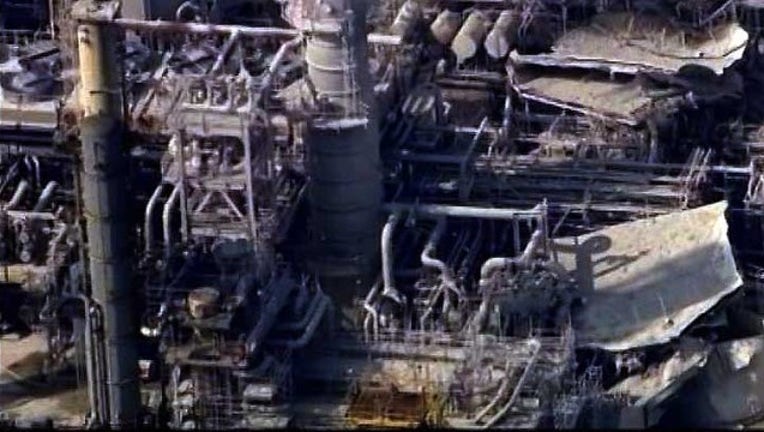 The facility — a structure several stories tall — was shattered. Crews poured water onto the structure afterward, and a fire spokesman said at midday the situation was controlled.

The facility's flare system was triggered to burn off fuel that could add to the fire, Deuel said.

Residents within a mile or two reported feeling a sharp jolt that they initially thought was an earthquake.

Electrical contractor Cory Milsap-Harris, 21, was in a switch house next door to the blast site keeping an eye on three colleagues working 8 feet underground in a manhole.

"Everything was going smooth. Next thing I hear sounded like heavy metal next door. There was a loud bang," he said. "You could feel the building shake a little."

Milsap-Harris said the blast reverberated in his ears despite the several layers of hearing protection he routinely wears.

He rushed his co-workers outside, where people were running away from flames and black smoke.

Brittney Davis, whose office is about a block from the refinery, says the blast sounded and felt like something had rammed her building.

"The whole building shook. We couldn't figure out what it was, but we stepped outside the door and the flames were shooting up from the refinery," she said.

"I could feel the heat from the flame," she added.

Exxon Mobil spokesman Todd Spitler said the four contractors were taken to a hospital for evaluation. The refinery sent many workers home for the day.

Spitler said the cause of the explosion was under investigation and company officials were working with local agencies. Nearby roads were closed after the blast hit, shortly before 9 a.m., Torrance police Sgt. Paul Kranke said.

Students at 13 nearby schools were kept indoors, said Tammy Khan of the Torrance Unified School District.

The facility about 20 miles south of downtown Los Angeles covers 750 acres, employs over a thousand people, and processes an average of 155,000 barrels of crude oil per day and produces 1.8 billion gallons of gasoline per year, according to the company.