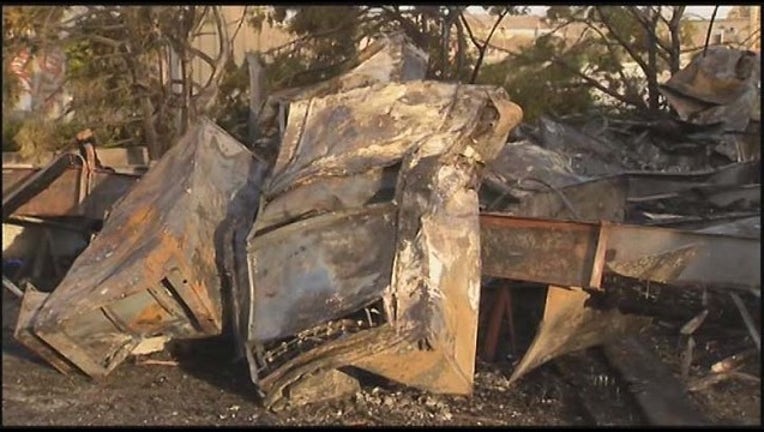 EAST PALO ALTO, Calif. (BCN) -- Coroner's officials said the human body recovered from a one-alarm trailer fire at an abandoned chemical refinery Friday morning was burned beyond recognition, but the blaze itself is not currently thought to be suspicious, according to police.

Police and firefighters were dispatched to the Romic Environmental site, an abandoned chemical refinery at 2081 Bay Road in East Palo Alto, at 1:14 a.m.

Firefighters found a portable office trailer engulfed in flames and had the incident under control within roughly 20 minutes of arrival on scene.

Once the fire was extinguished human remains were found inside the trailer, according to Menlo Park Fire Protection District Chief Harold Schapelhouman.

San Mateo County Coroner Robert Foucrault said that extensive burns could make the victim difficult to identify, but they may rely on DNA evidence or dental records.

"You get a fire like this and sometimes there's not a lot left in terms of identifiable parts of a human body that the coroner can work with," Schapelhouman said.

Investigators believe the fire may have originated inside the trailer, on the other side from where the body was found, according to Schapelhouman. The official cause of the fire remains under investigation, however.

"It's hard to say, there was no electrical power to the trailer," Schapelhouman said. "Maybe it was something he used for cooking or warming."

There's a contractor doing soil-remediation work at the Romic Environmental site on a weekly basis, Schapelhouman said, but he didn't think that's how the victim came to be on the premises.

"It doesn't appear to be anyone from the company," Schapelhouman said. "There's no vehicles or anything else, and there is a homeless encampment in close proximity to the site."

Investigators from the East Palo Alto Police Department are searching the neighborhood for information that may lead to discovering the decedent's identity. They're asking anyone with information about the fire or the victim to contact Detective Tommy Phengsene (650) 798-5944 or call dispatch at (650) 321-1112.