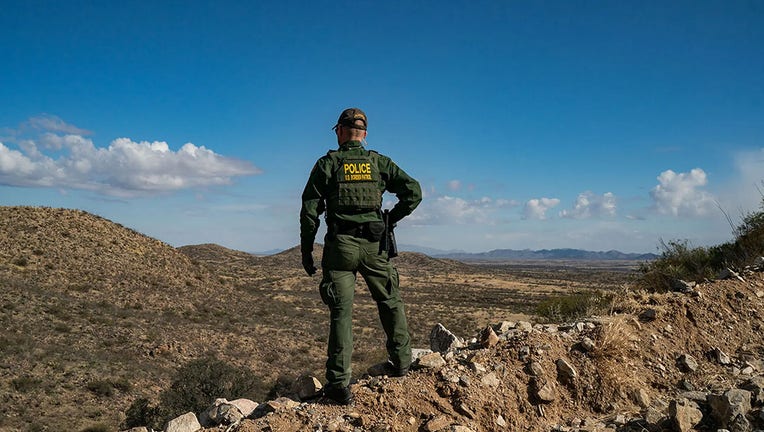 Jan 23, 2022: A U.S. Border Patrol agent stands on a cliff looking for migrants that crossed the border wall between the U.S. and Mexico near the city of Sasabe, Arizona. (Photo by Salwan Georges/The Washington Post via Getty Images)

Border Patrol apprehended at least 23 people coming across the southern border whose names are on the terror watchlist in 2021, according to Customs and Border Protection (CBP) data obtained by Fox News.

Between Jan. 20 and Dec. 27, 2021, there were 23 encounters with individuals whose names matched on the Terrorist Screening Database (TSDB).

Four were in the Rio Grande Valley Sector, 4 in Del Rio Sector, 3 in El Paso Sector, 2 in Tucson Sector, 2 in Yuma Sector, 4 in El Centro Sector and 4 in San Diego Sector. The information was provided to Fox News in response to a Freedom of Information Act (FOIA) request submitted in December.

The Terrorist Screening Database (TSDB) contains information about the identities of those who are known or "reasonably suspected" of being involved in terrorist activities. Republicans lawmakers have repeatedly called for the number of those encountered at the border to be made public by the administration.

"Reporting indicates that multiple individuals with terrorist ties have been recently apprehended after illegally crossing the border, and that such encounters may be increasing," Reps. James Comer and John Katko, who serve as ranking members on the Oversight and Homeland Security committees respectively, wrote to DHS Secretary Alejandro Mayorkas last month.

"The American people deserve to know whether President Biden’s weak border policies are allowing terrorists to enter our homeland," they said.

Former Border Patrol Chief Rodney Scott has repeatedly sounded the alarm over the number of TSDBs coming across the border, telling fellow agents last year that it was "at a level we have never seen before."

"We have terrorist threats we can’t get into in this type of a forum but they are real," he told Fox News’ Bret Baier in October.

The Republicans on the committees have also requested documents showing the number of TSDB-linked migrants in each Fiscal Year from 2016 to present, as well as information about their countries of origin.

They also have requested any data estimating the number who have crossed the border but ultimately evaded Border Patrol.

Fox News reported earlier this month that over 62,000 illegal immigrants evaded Border Patrol agents in March, averaging about 2,000 a day.

The numbers come as the Biden administration is yet again facing sky-high border numbers that are overwhelming agents and resources. According to a filing by CBP last week, agents encountered more than 212,000 migrants at the border in March, higher than any month last year.