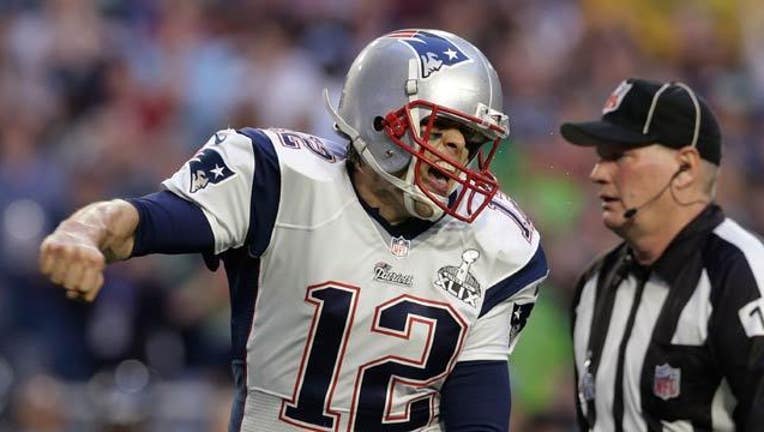 GLENDALE, Ariz. (AP) — Tom Brady and the Patriots made this Super Bowl all about football, not footballs.

Clutch football, spiced by a sensational fourth-quarter rally and a goal-line, game-saving interception.

The record-setting Brady threw for four touchdowns, including a 3-yarder to Julian Edelman with 2:02 remaining Sunday night as New England rallied from a 10-point deficit to win its fourth Super Bowl in the Brady-Bill Belichick era, 28-24 over Seattle.

But the Patriots (15-4) had to survive a last-ditch drive by the Seahawks (14-5), who got to the 1, helped by a spectacular juggling catch by Jermaine Kearse. Then Rookie Malcolm Butler stepped in front of Ricardo Lockette to pick off Russell Wilson's off-target pass and complete one of the wildest Super Bowl finishes.

Brady leaped for joy on the Patriots sideline after Butler's interception.

"It wasn't the way we drew it up," said Brady, who won his third Super Bowl MVP award.

Brady surpassed Joe Montana's mark of 11 Super Bowl touchdown passes with a 5-yarder to Danny Amendola to bring the Patriots within three points.

Seattle, seeking to become the first repeat NFL champion since New England a decade ago, was outplayed for the first half, yet tied at 14. The Seahawks scored the only 10 points of the third period, but the NFL-leading defense couldn't slow the brilliant Brady when it counted most.

It didn't matter how much air was in the balls, game Brady was unstoppable when the pressure was strongest. While pushing aside the controversy over air pressure in the footballs stemming from the AFC title game, the Patriots toyed with Seattle in the final 12 minutes.

Seattle didn't quit — it never does — and Kearse's 33-yard catch with 1:06 remaining got it to the 5. Marshawn Lynch rushed for 4 yards, then backup cornerback Butler, who was victimized on Kearse's reception, made the biggest play of his first NFL season with 20 seconds remaining.

"I just had a vision that I was going to make a big play and it came true," said Butler, an undrafted rookie from West Alabama. "I'm just blessed. I can't explain it right now. It's crazy."

Seahawks linebacker Bruce Irvin was ejected in the final seconds for instigating a near-brawl, delaying the celebration for the Patriots.

Soon they were mobbing one another on the same field where their 2007 unbeaten season was ruined in the Super Bowl by the Giants. They also fell to the Giants for the 2011 title.

But thanks to superstar Brady and the obscure Butler, they are champions again.

Brady now has equaled Montana with four Lombardi Trophies and three Super Bowl MVPs. He stands alone with 13 Super Bowl touchdown passes. He was 37 for 50 for 328 yards against the NFL's top-ranked defense.

He also was picked off twice. Brady had been intercepted a total of two times in his previous five Super Bowls.

Yet, he picked apart the Seahawks on drives of 68 and 64 yards, solidifying his legacy as one of the greats of the game.

His heroics offset those of Chris Matthews, one of Seattle's least-used players before the postseason. Matthews recovered the onside kick that helped the Seahawks beat Green Bay in overtime for the NFC crown, and had a breakout performance Sunday.

Having never caught a pass in the NFL, Matthews grabbed four for 109 yards and a touchdown. Lynch ran for 102 yards, but didn't get the ball at the 1 on the decisive play — a decision the Seahawks will rue forever.

The teams got down to football under the open retractable roof at University of Phoenix Stadium — the first venue to host an indoor and an outdoor Super Bowl — after dealing with distractions far beyond the typical Super Bowl hype. The Patriots are being investigated for using under-inflated footballs in their 45-7 win over Indianapolis in the AFC championship game.

It was a game of spurts by both teams, at times looking like a Patriots blowout, then appearing to be a repeat coronation for Seattle, which had a vast majority of the fans among the 70,288.

Jeremy Lane made the first big play to negate a nearly eight-minute drive by the Patriots with a leaping interception at the goal line late in the first quarter. Lane, a third-year backup Legion of Boom member, made his first pro interception, but left with a wrist injury after being tackled by Julian Edelman.

His replacement, Tharold Simon, got torched by Brady for much of the remainder of the contest.

Wilson was getting no time to look downfield and he didn't get off a pass in the first quarter. When Brady completed his record 50th postseason TD throw, 11 yards to Brandon LaFell against Simon, it was 7-0.

Seattle went to its bench to help tie it.

Matthews' first career catch, a reaching 44-yarder over Kyle Arrington and by far the longest first-half play for Seattle, led to Lynch's bruising 3-yard TD run to make it 7-7.

But Brady to Rob Gronkowski made it 14-7 and seemed to finish off a dominant first half for the Patriots. Except no one told the resilient Seahawks.

A dormant offense turned dangerous in a span of 29 seconds, covering 80 yards in five plays, including a late gamble. After Lockette caught a 23-yard pass and Arrington was flagged for a facemask, it put Seattle at the 10 with :06 remaining. Never one to shy away from a challenge, coach Pete Carroll went for it and the new Seahawks hero, Matthews, grabbed Wilson's pass in the left corner of the end zone.

It was the most lopsided halftime tie imaginable.

Then Seattle stormed to a 24-14 lead in the third quarter on Steven Hauschka's 27-yard field goal and Doug Baldwin's 3-yard reception from Wilson. New England was stumbling — until Brady once again stepped up.

"It was a lot of mental toughness," Brady said. "Our team has had it all year. We never doubted each other, so that's what it took."