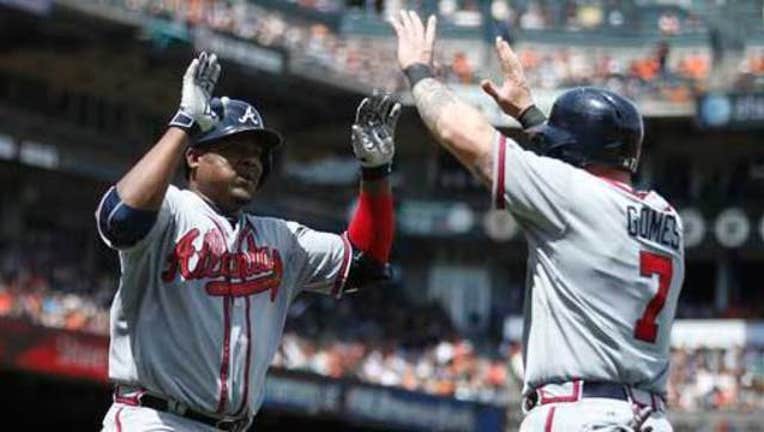 SAN FRANCISCO (AP) — Jace Peterson continued his torrid pace and once again came through with the game on the line.

Peterson tripled with the bases loaded in Atlanta's four-run ninth inning to lead the Braves to a 7-5 victory over the San Francisco Giants on Sunday.

Freddie Freeman sparked the rally with his second home run in as many at bats against Giants closer Santiago Casilla (4-1), who blew his third save.

"I put a good swing on it and it worked out for us," said Peterson, who has five hits in his last two games. "Freddie hit the home run to get it going. No one in this dugout ever feels like we're out of a game."

"I was trying to get two before I caught the ball," Crawford said. "It wasn't hit (hard) and I came in to get it, maybe too hard."

Nick Masset (1-1) pitched 1 2-3 scoreless innings for the win. Jason Grilli got the final three outs for his 15th save in 16 chances.

"A lot of stuff can happen," Braves manager Fredi Gonzalez said. "There was a double play ball, game over. But it takes a bad hop and Crawford can't come up with it and all of a sudden we have more life."

Freeman, the current active consecutive games leader with 218, entered the game defensively in the seventh.

"I'm not a big fan of off days but I guess it was a good idea today," Freeman said. "Hopefully I can carry the momentum of that home run, and the one a couple of days ago, into Arizona."

Madison Bumgarner, who retired the first 12 batters, turned in a quality start but did not figure in the decision.

He allowed three runs and five hits in 6 1-3 innings and was pulled after giving up a two-run homer to Juan Uribe and singles to Chris Johnson, who had two hits and drove in a run, and Simmons.

Uribe hit his second homer in as many days.

Braves starter Julio Teheran allowed three runs and four hits in six innings. He walked four and struck out one.

Belt and Crawford hit back-to-back home runs leading off the second. Johnson's RBI single in the fifth cut the Giants lead in half and Uribe's homer put the Braves ahead.

Matt Duffy led off the seventh with a double and Donnie Veal took over for Teheran, giving up a game-tying single to Gregor Blanco and Panik's home run.