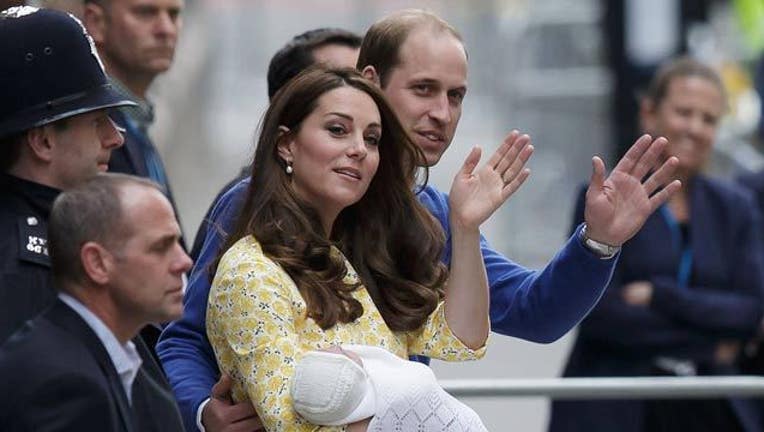 Prince William and his wife Kate, the Duchess of Cambridge, on Monday announced the name they picked for Britain's newborn princess, a choice seen as a tribute to both Prince William's parents and grandmother, the queen, as well as a link to Kate's family.

The princess, the second child of William and Kate, will be known as Her Royal Highness Princess Charlotte of Cambridge, royal officials said.

The birth of Princess Charlotte marks a new chapter for William and Kate, widely seen as the monarchy's most modern, popular couple, but the names they picked are firmly rooted in royal tradition. Charlotte, the feminine form of Charles, appears to be a nod to the newborn's grandfather, Prince Charles. The baby's middle names honor Queen Elizabeth II, the infant's 89-year-old great-grandmother, and the late Princess Diana, William's mother and the baby's grandmother.

Charlotte also features in Kate's family, as the middle name of her sister, Pippa Middleton.

The newborn princess is fourth in line to the throne after Charles, William and her older brother, 21-month-old Prince George.

William and Kate introduced the baby princess to the world Saturday evening, just 12 hours after Kate checked into St. Mary's Hospital in London to give birth. The baby weighed in at 8 pounds, 3 ounces (3.7 kilograms).

Her new name was warmly welcomed Monday by royal fans. Some were particularly pleased about the tribute to Diana, still remembered fondly by many. Diana, who died in 1997 at age 36, gave birth to William and Harry at the same London hospital where Charlotte was born.

"I so much wanted the name Diana to be in there somewhere," said Munever Halil, 52. "I wanted it to be Elizabeth Diana, so I think it's lovely."

"Perfect names. My 2-year-old Charlotte Diana will be thrilled at cousinly name-sharing," he tweeted.

Earlier Monday, Westminster Abbey's bells pealed and gun salutes were fired across London in honor of the newborn princess. In a display of traditional pageantry, dozens of deafening volleys were fired from Hyde Park and the Tower of London to mark the occasion.

The royal couple had kept the world guessing about the baby's name until after both sets of grandparents got a chance to visit Kensington Palace on Sunday to meet their granddaughter.

Bookmakers had taken huge amounts of bets on the name and Charlotte had been a front-runner alongside Alice and Victoria.

"Charlotte was the hot tip over the weekend," Ladbrokes spokeswoman Jessica Bridge said. "We may have lost a fortune, but we're paying out with a smile and wish the duke and duchess all the best."

Another bookmaker, William Hill, said they were relieved because their top bet had been Alice. Spokesman Rupert Adams said 5,096 bettors correctly guessed the name and his firm would pay out just over 100,000 pounds ($151,100) in the name market.

Britain's royal history includes several Charlottes, a name originating from French, but most lived in the distant past. Queen Charlotte, the wife of George III, was a keen botanist and founded London's Kew Gardens. Born in 1744, the queen had 15 children — including one Princess Charlotte, who grew up to marry a German duke.

George IV also named his only child Charlotte in 1796, but she died in childbirth at the age of 21 in 1817, leading to a mass outpouring of grief in Britain.

The new princess will be formally christened in the coming weeks, potentially in the same chapel at St. James's Palace, like her brother. Her godparents will likely be announced on the morning of the christening.

William and Kate are staying at London's Kensington Palace for now, but in the coming days they are expected to return to their country home near the queen's Sandringham estate, 120 miles (190 kilometers) north of London.