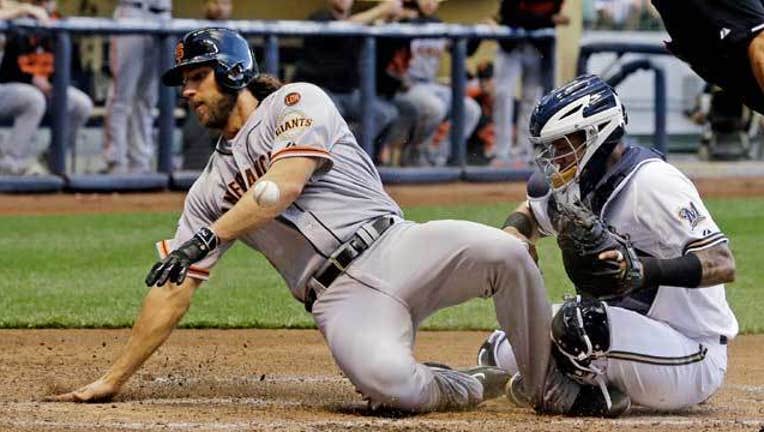 MILWAUKEE (AP) — Madison Bumgarner won another game in May and three San Francisco Giants homered in a 6-3 victory over the Milwaukee Brewers on Tuesday night.

Bumgarner (6-2) gave up four hits and three earned runs in six innings to improve to 5-1 in his last six starts. He's also 9-1 in May the last two seasons.

Milwaukee lost is fourth straight and is 1-6 over the last seven.

Matt Garza (2-7) struggled again, allowing eight hits and five earned runs in five innings. The right-hander has lost his last four decisions, owns just one victory in his last eight starts and is 0-4 at Miller Park.

The Brewers already trailed 5-0 when they got their first hit off Bumgarner in the fourth on a solo homer by Aramis Ramirez.

In the sixth, a run-scoring double by Ryan Braun cut San Francisco's lead to 5-2 and put runners at second and third with no outs. But after Ramirez's sacrifice fly trimmed it to 5-3, Bumgarner got Jason Rogers to pop out to second before Hector Gomez's sharp line drive was caught by diving shortstop Brandon Crawford.

Pence's solo homer came in the first and Duffy's two-run shot just over the leaping glove of centerfielder Carlos Gomez made it 5-0 in the fourth. The Giants increased their lead to 6-3 on a solo blast by Belt in the seventh.

Giants: Matt Cain threw 25 pitches to three batters in a simulated inning Tuesday afternoon. He began the season on the disabled list and hopes to return before the All-Star break in July.

Brewers: Jonathan Lucroy will begin a rehab assignment Thursday with Class A Brevard County and hopes to join Milwaukee Monday in St. Louis. The catcher has been on the disabled list since April 20.

Brewers: Mike Fiers (1-4, 4.63 ERA) will pitch on short rest as a replacement for injured Wily Peralta.