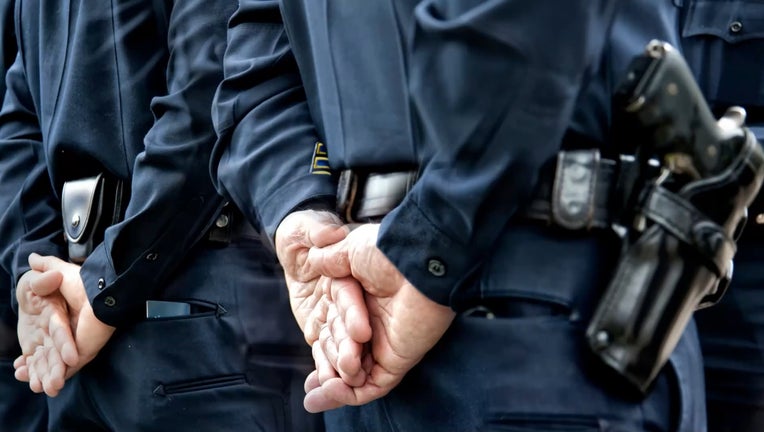 FILE PHOTO. Two police officers stand with their hands behind their backs.

SACRAMENTO, Calif. - Bad law enforcement officers could permanently lose their badges under a bill advanced by California lawmakers on Friday, a year after a similar measure died in the waning hours of the legislative session.

California remains one of just four states without a way of decertifying officers despite nationwide protests over the murder of George Floyd in Minneapolis that have driven reform efforts.

The state Assembly on a 46-18 vote approved what has become the marquee criminal justice reform measure of this legislative session, sending a softened version back to the Senate for a final vote before the Legislature adjourns for the year on September 10.

"This is not an anti-police bill. This is an accountability bill. Without any accountability, we lose the integrity of the badge, and the bond with the community is broken," said Democratic Assemblywoman Akilah Weber, who carried the bill in the Assembly.

The amended bill, she said, "affords ample due process for officers, provides necessary community representation, and ensures that good officers are not decertified."

Law enforcement organizations and those who opposed the bill agreed that the state needs a way of removing bad officers.

But they objected that the bill by Democratic Sen. Steven Bradford is biased because it relies on a nine-member disciplinary board with just two police representatives and seven members with professional or personal backgrounds related to police accountability.

"It is grossly unfair," said Republican Assemblyman Kelly Seyarto, one of those of both parties speaking in opposition. "None of the other 46 states have a similar composition. ... None of them are this lopsided."

The measure recently drew the support of "More Than a Vote," the advocacy group started by NBA star LeBron James and other Black athletes.

The group urged Assembly members to pass the bill "so that a badge can no longer be used as a shield against accountability. So that Black communities can breathe."

The bill drew sometimes emotional debate, with Democratic Assemblyman Freddie Rodriguez saying he couldn't support it for fear it might prompt officers including his son, a Los Angeles County deputy sheriff, to "second-guess themselves," freeze when they need to act, and be injured or killed.

"I, too, as an African American father to African American sons, am also concerned that they get home every night," responded Democratic Assemblyman Reggie Jones-Sawyer. "There are enough protections in here to ensure that (officers) don’t get railroaded," he added.

Under the bill, the state would create a mandatory new state license, or certification, that could then be revoked so officers cannot simply move to another police department.

The police decertification bill would give the state’s Commission on Peace Officer Standards and Training authority to revoke officers’ eligibility for serious misconduct — including using excessive force, sexual assault, intimidating witnesses, making a false arrest or report, or participating in a law enforcement gang.

Officers could also lose their certification for "demonstrating bias" based on race, religion, gender identity, sexual orientation or mental disability, among other criteria.

Republican Assemblyman Tom Lackey, a former California Highway Patrol officer, was among opponents saying the definition of wrongdoing is too broad and too vague.

Bradford softened some of the requirements in his bill after criticism from law enforcement and other lawmakers.

He initially proposed that four of the advisory board members have backgrounds related to "police misconduct" before changing the wording to "police accountability." And instead of requiring that two members be victims or family members, the bill now requires strong consideration for including those representatives.

Another Assembly amendment requires a two-thirds vote to decertify an officer, and that officials must have clear and convincing evidence of wrongdoing.

Additional Assembly amendments allow the commission to suspend an officer’s license as a lesser alternative to de-certifying the officer; clarify what constitutes serious misconduct; require 40 hours of decertification training for board members; and make it clear that officers retain their constitutional rights, including to free speech.

Bradford and other supporters said his bill isn’t biased against officers because the 18-member commission is mostly composed of law enforcement professionals.

The division would now review officer investigations conducted by local law enforcement agencies under the amended bill, though it still could choose to conduct its own investigations.

The same bill puts new limits on police immunity from being sued for civil rights abuses, though Bradford had to significantly narrow that portion of his bill in response to concerns raised by his fellow Democrats.

It now only would end what Bradford has called "three of the most egregious immunities commonly asserted by law enforcement" — falsifying arrests, failing to provide medical care, or causing injury to a prisoner.

The League of California Cities was among opponents, objecting that the bill "would eliminate the federally held doctrine of qualified immunity and create a largely unworkable peace officer decertification process."

"My heart was broken last year that this bill couldn’t move through this body in the same year that millions more people protested than any point in American history," said Assemblyman Isaac Bryan, a Democrat. "It’s a stain on this body. It’s a stain that we can lift today."

The same California commission once had the ability to remove officers’ certification until the Legislature removed that power in 2003. That left it to local law enforcement agencies to decide if officers should be fired, but they could often simply get jobs in different police departments.

The other states that lack a statewide decertification process are Hawaii, New Jersey and Rhode Island.