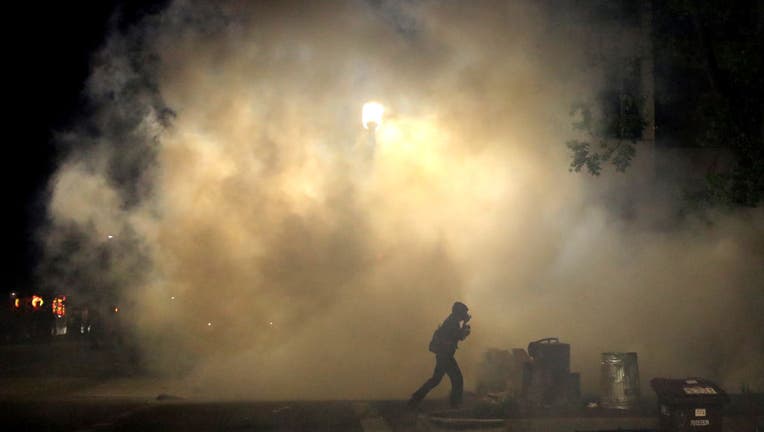 OAKLAND, CALIFORNIA - MAY 29: A demonstrator runs through tear gas that was deployed by police officers during a protest sparked by the death of George Floyd while in police custody on May 29, 2020 in Oakland, California. Earlier today, former Minnea

SACRAMENTO, Calif. - California would restrict the use of rubber bullets and chemical irritants during protests under legislation advanced Thursday in the wake of last year’s widespread public demonstrations over racial injustice. A similar bill died last year.

The bill would set statewide standards for using the weapons that advocates say sometimes harmed peaceful protesters. Police say they are needed to prevent violence and are often better than the alternatives.

"This is just more of the assault on law enforcement, taking the handcuffs off criminal offenders and putting them on our law enforcement professionals," objected Republican Sen. Jim Nielsen, who previously headed the state parole board.

"I would say there have been serious injuries. In fact many people have lost an eye due to these projectiles," responded Democratic Sen. Lena Gonzalez, who carried the bill in the Senate.

It would also require training officers to use the less-lethal weapons only when someone as at risk of death or serious injury, or "to bring an objectively dangerous and unlawful situation safely and effectively under control."

Officers would still have to give verbal warnings and try other de-escalation tactics first. Departments would also have to report any use of the weapons.

The weapons could still be used in state prisons and county jails.

It passed the Senate, 26-10, and now returns to the Assembly for a final vote.

A similar bill by Gonzalez died without a Senate vote in the waning hours of last year’s legislative session.

It’s among several reforms advancing in the Legislature as it rushes to complete its work by September 10.

One headed to Gov. Gavin Newsom’s desk would set standards for when officers must intervene when they believe another officer is using excessive force. Another awaiting his signature would expand on an existing law requiring the disclosure of police misconduct records. A bill awaiting final action in the Assembly would limit the use of gang sentencing enhancements to the most serious offenses.