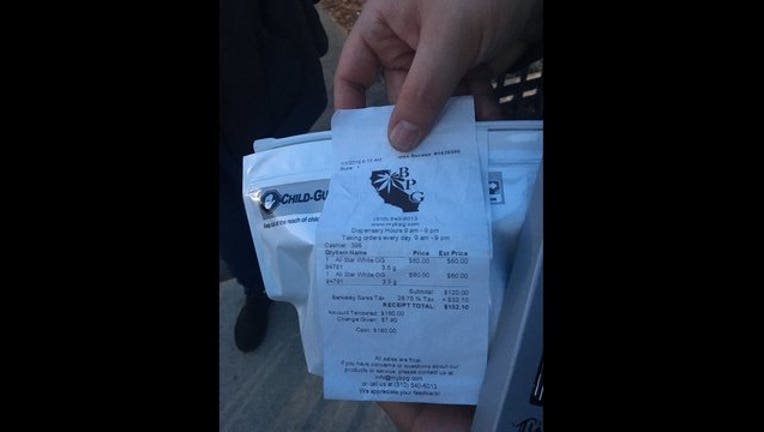 Growers and sellers in the nation's largest legal marketplace have been complaining that taxes, that in some cases can near 50 percent, are too high. Many consumers, they say, are shopping in the underground market to save a buck or two.

Finding a sweet spot for marijuana taxation has been an issue in other pot-friendly states.

Washington, for example, initially imposed separate 25 percent taxes up to three times: when the grower sold it to the processor, when the processor sold it to the retailer and at the point of public sale. In 2015 that was pushed down to a 37 percent tax at the point of retail sale, plus sales tax. In Seattle, that combined rate is about 47 percent for recreational sales.

Lackey, who spent 28 years in the California Highway Patrol, told reporters that the cumulative tax burden is high for an industry being regulated for the first time.

It wasn't immediately clear when the bill might be considered, or its level of support within the Legislature.

California began legal sales for adults on Jan. 1 as part of a sweeping plan to transform its long-running medicinal and illegal markets into a multibillion-dollar regulated market. The reshaping of such an expansive illegal economy into a legal one hasn't been witnessed since the end of Prohibition in 1933.

Black market dealers can ignore an array of state and local levies that push up prices in the legal market.

The state imposes a 15 percent excise tax, then local governments can add taxes, too, which vary around the state. There are separate state taxes on cultivation, along with regular sales taxes. There are new costs for testing and distribution, which could also be rolled into the counter price.

Generally, an eighth of an ounce of good-grade pot, enough to roll five or six joints, sells for around $35 in legal shops in the Los Angeles area. Direct taxes alone would slap more than $12 on that price: the 15 percent state excise tax, the city's 10 percent tax on recreational purchases and the usual sales tax, nearly 10 percent. Store policies appear to vary on how much of that cost is reflected in the advertised price on websites.

State cultivation taxes include $9.25 for each ounce of cannabis buds and $2.75 for an ounce of leaves, which can also be included in the sales price.

The lawmakers' proposal would trim the state excise tax to 11 percent from 15 percent, and suspend the cultivation taxes, for three years.

According to one estimate the proposal would cut the cost for consumers at the sale counter by 9 percent, lawmakers say.

The state has estimated it would collect as much as $1 billion in marijuana taxes within several years. It wasn't immediately clear how deeply the proposed cut would reduce that revenue.

Yolo County Board of Supervisors Chairman Oscar Villegas said his county has a June ballot measure that would boost taxes there in cooperation with the legal marijuana industry, but said lower state taxes will help.

"The one thing we all do agree on is that no matter what tax rate, whatever structure we put together, the likelihood of this entire system being undermined by the black market is very real," Villegas said.

Bonta, of Oakland, said the proposal was intended to help legal businesses during the transition period into the emerging regulated market.

"If we don't get it right in the beginning, it will be hard to make up for it later and correct in the future," Bonta said.

"It doesn't happen overnight, but for-profit legalization drives down production and distribution costs for at least three reasons," Kilmer said in an email to The Associated Press last month. "It reduces the risk of arrest, allows for large industrial grows and increases competition."

Kilmer noted that even after Washington simplified its tax structure, the average price for a gram continued to fall - from around $11.50 in July 2015 to about $7.50 two years later, a more than 30 percent drop.