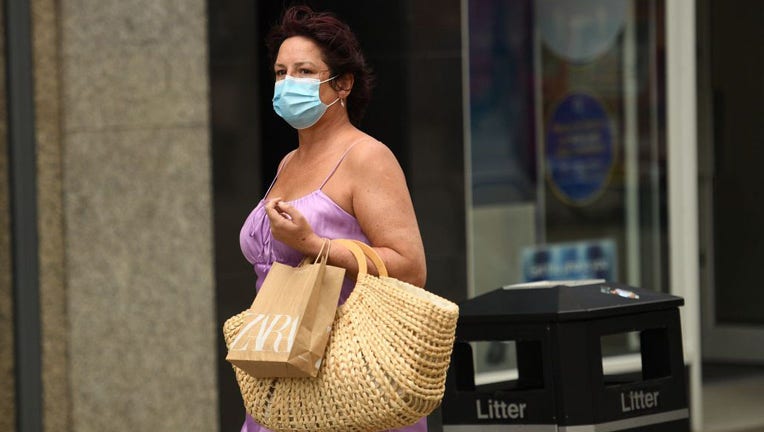 MARIN, Calif. - More California counties are trying to put some bite behind public health orders as hospitalizations and positive tests for the coronavirus continue rising in many parts of the state.

In the San Francisco Bay Area, Marin and Napa county officials this week approved fines ranging from $25 to $500 for individuals violating public health orders, including failing to wear masks. Businesses will face fines up to $10,000. Supervisors in adjoining Sonoma County were considering a similar move Thursday.

In Marin, the fines will be imposed based on “risks to public health, previous warnings, lack of good-faith efforts to comply, and increased revenue generated from noncompliance,” the county said.

San Diego County, the state’s second-most populous, will form a Safe Reopening Compliance Team designed to get local code enforcement departments working together to pursue public complaints of health mandate violations. However, it wasn’t clear whether law enforcement would begin writing more tickets in the county where the main policing strategy has been asking for voluntary compliance.

The virus has surged in many parts of California, which on Wednesday surpassed New York as the state with the most confirmed cases. Another 12,000 cases were added Thursday, bringing the state total to 425,000.

“We cannot afford to ignore #COVID19, or simply hope it goes away. We have to take action,” Newsom tweeted. “Your actions can literally save lives.”

Hospitalizations and intensive care patients have been rising steadily. yet both dipped Wednesday, with hospitalizations dropping by 345 to 6,825. But that still is more than double the total in mid-June.

While Newsom has acknowledged the difficulty of enforcement for 40 million residents, he continued to urge people to obey social distancing and mask-wearing requirements — and stay home. Public health officials fear many of the new cases come from close contact at social gatherings, especially among young people.

The spike in cases came after much of California’s economy was reopened in May and June following nearly three months under a stay-at-home order that forced most businesses to close. Newsom has reimposed some closures, shutting down bars and indoor dining statewide, and ordering malls, gyms and other indoor businesses to close in 36 counties with the most troubling virus case increases.

Hundreds of state strike teams have fanned out across California in recent weeks to check businesses for violations of health mandates. Nearly 844,000 businesses have been contacted via in-person visits, phone calls, and emails since the effort began on July 2, but only 99 citations have been issued, said Brian Ferguson, a spokesman for California’s Office of Emergency Services.

The inspectors are from Alcohol Beverage Control, the Division of Occupational Safety and Health, the Board of Barbering and Cosmetology and other state licensing entities. There are no specific enforcement goals or quotas, Ferguson said.

“The goal is to protect public health and safety in communities with a high prevalence of COVID-19,” he said.

Los Angeles County, the state’s most populous with 10 million people, will issue fines starting at the end of August to businesses that are non-compliant. The penalties could range from $100 for the first offense to $500 and a 30-day permit suspension for multiple offenses, LA County Health Officer Dr. Muntu Davis said.

“This plan — while some may consider it punitive or harsh — is really about finding a path to reopen our economic sectors again with the stronger enforcement tools to ensure that our collective health and economy are protected,” Davis said.

Since March 26, Los Angeles County restaurants, one grocery store, one pool and 67 other businesses were shut down for violations of health orders, officials said.

Some officials say counties should take more extreme measures, including reimposing strict shelter-in-place orders. State Sen. Steve Glazer, a Democrat who represents part of Contra Costa County in the San Francisco Bar Area, said Thursday that every county with a positive test rate higher than 2% should require people to stay home except for essential trips. That would apply to almost every county in the state.

“Requiring a new shelter-in-place statewide is the type of shock to the population that in my view is required to get this virus back under control,” he said.

That threshold is far lower than the 8% positive test rate the state used last spring as one of the benchmarks determining whether a county could reopen more of its economy. The state’s 7-day average positive test rate hit 8% on Thursday.

Glazer also wants a mandatory 14-day quarantine for anyone entering California from another state or country with a positive test rate higher than 2%.

For most people, the new coronavirus causes mild or moderate symptoms, such as fever and cough that clear up in two to three weeks. For some, especially older adults and people with existing health problems, it can cause more severe illness, including pneumonia, and death.