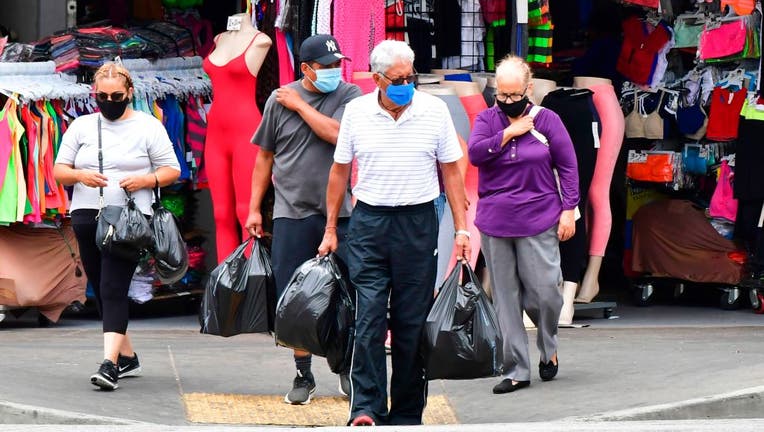 People wear facemasks while shopping in Los Angeles, California on July 1, 2020, after indoor restaurants, bars and movie theaters across much of California were ordered to close for at least three weeks. - Some Californian restaurants shut their doo

He said the teams would “go after people that are thumbing their nose, that are particularly being aggressive, reticent to do anything.”

He singled out bars, restaurants, meatpacking plants and other facilities that he said may be putting employees as well as customers at risk.

The teams include representatives from the California Highway Patrol; the Division of Occupational Safety and Health, as well as people from Alcohol Beverage Control; Barbering & Cosmetology; Business Oversight; Consumer Affairs; Food and Agriculture; Labor Commissioner’s Office; and the Governor’s Office of Business and Economic Development.

“It’s more education. I’m not coming out with a fist,” Newsom insisted, but those on the strike team have licensing and enforcement power over a broad array of businesses that are subject to stringent guidelines.

The Democratic governor on Wednesday broadened restrictions across much of the state on bars, indoor dining, movie theaters, gambling and others in places where he said crowds over the long Independence Day weekend would be particularly vulnerable.

Health and law enforcement and other officials in some counties have publicly said they will not enforce the state health orders. Newsom said the state is stepping in “from a code and licensing perspective.”

The agencies will have a central reporting system for complaints from residents, local health officials or law enforcement so they can spot businesses with repeated offenses or those openly flaunting the orders, said Brian Ferguson, a spokesman for California’s Office of Emergency Services, which will oversee the program.

There won’t be roving bands of state inspectors, he said, but the various agencies will continue doing their jobs in a more coordinated manner focusing on those repeat violators.

”The idea here is really to target those who are in open defiance,” Ferguson said. “The goal is not to create stress on individual citizens who took their masks down to have a drink of water or forgot it at the gas station.”

“Will this apply to customers who refuse to wear a face mask, for whatever reason?” he asked. “Will that kick in an enforcement action that is a burden on the restaurant?”

The teams will initially focus on 19 of the state’s 58 counties that have the most restrictions because of concerns about coronavirus in their communities, said Office of Emergency Services Director Mark Ghilarducci. Those counties include nearly three-quarters of the population.

Enforcement officials will first seek cooperation with local health officials and business owners, he said, which has been the state’s approach with rules throughout the pandemic. But if they find violations, the teams will leverage their enforcement and regulatory authorities to enforce the public health orders, he said.

Fred Jones, attorney for the Professional Beauty Federation of California, said it’s appropriate to have the Board of Barbering & Cosmetology participate, as that agency has sole authority to regulate barber and beauty shops.

But he warned of legal challenges if the teams enforce emergency orders that have not been approved by state lawmakers or through the usual regulatory process.

“Even if we may question the legality, we don’t question the perception and the importance of setting our clientele at ease,” Jones said. “So we are going to abide by those protocols.”

Masks and social distancing to prevent crowds are intended to slow the spread the virus. For most people, the new coronavirus causes mild or moderate symptoms, such as fever and cough that clear up in two to three weeks. For some, especially older adults and people with existing health problems, it can cause more severe illness, including pneumonia and death.