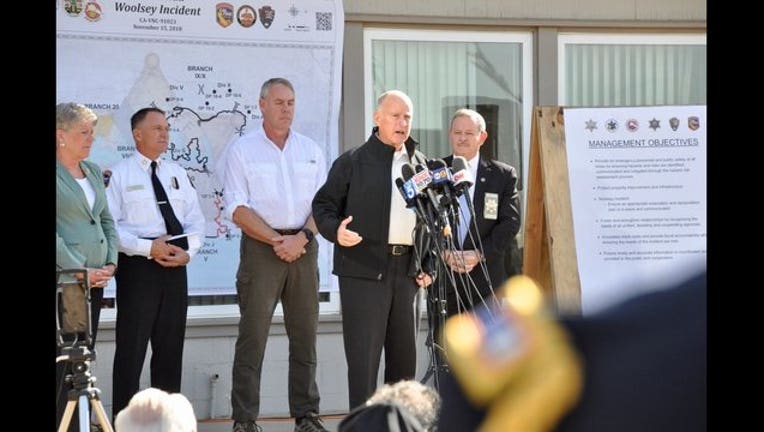 SACRAMENTO, Calif. (AP) -- A former state senator convicted of lying about his residence and three refugees from Vietnam who could face deportation are among 38 people pardoned Wednesday by Gov. Jerry Brown ahead of the Thanksgiving holiday.

Brown's pardons also include a man who just lost his Paradise home in a wildfire.

Former Sen. Roderick Wright was convicted of felony charges of voter fraud and perjury in 2014 when a Los Angeles County jury determined he lived outside the district he represented. Some lawmakers at the time defended Wright, saying state law was ambiguous about the issue. The Legislature has since changed the law to make Wright's situation legal, and the state Supreme Court cleared the way for the pardon this week.

Wright was sentenced to 90 days in jail then released almost immediately.

Wright said Wednesday that he was wrongly prosecuted and that the law he was charged under did not say he had to live at the home he owned in his district. Wright said as a lawmaker, he spent nine months of the year in Sacramento. He also accused prosecutors of introducing irrelevant and prejudicial evidence at trial that Wright drove a Maserati and had suits from Neiman Marcus.

"It certainly is a day of thanksgiving for me," Wright said. He said he was ecstatic about the pardon and grateful to Brown for looking closely at his case.

Still, he said he lost a portion of his life that he could never get back.

Wright said he was wrongly prosecuted and that the law he was charged under did not say anything about how many days he had to spend at the home he owned in his district. If it had, he would have complied with that requirement, he said.

He was also pardoned for stealing a car in the 1970s.

Brown's pardons of refugees, all of whom arrived in the United States as minors, are his latest effort to help immigrants whose crimes could make them eligible to be deported. He said they've all completed their sentences and become upstanding citizens deserving of clemency.

The pardons don't automatically stop deportation proceedings, but they eliminate the state convictions on which federal authorities might base deportation decisions. That gives the men's lawyers strong legal arguments before immigration judges to try to prevent their removal from the country.

Brown pardoned Tung Tanh Nguyen, who was convicted of murder and robbery in 1994 in Orange County. The pardon says Nguyen risked his life to save civilians during a prison riot, and since his release "has become a tireless advocate for juvenile justice reform."

Truong "Jay" Quang Ly, who was convicted of voluntary manslaughter in 1997 when a passenger in a car Ly was driving shot and killed another driver, now owns seven restaurants in Southern California. Hai Trong Nguyen, who was convicted of robbery with a firearm in Los Angeles County in 1999, volunteers with anti-recidivism and prisoner re-entry organizations.

Brown says all three have behaved well since finishing their sentences.

Earlier this year, Brown drew an angry response from President Donald Trump when he pardoned  five ex-convicts facing deportation, including two who fled the Khmer Rouge regime in Cambodia with their families four decades ago.

Brown also pardoned a man who just lost his home when California's deadliest wildfire swept through the town of Paradise. Jason James Burnett was convicted of drug charges in 1994. Brown's spokesman, Evan Westrup, said the timing of the pardon was coincidental, "but he was certainly happy to hear some good news given what he's gone through in recent days."

The governor is a former Jesuit seminarian and traditionally issues pardons around Thanksgiving and major Christian holidays.

California's longest-serving governor has now issued 1,593 pardons, including 404 during his first two terms as governor from 1975 to 1983.

Brown's father, Edmund G. "Pat" Brown issued 467 pardons and 55 commutations, but there have been long stretches of very few in California.

From 1991 through 2010, former Govs. Pete Wilson and Gray Davis issued no pardons while Arnold Schwarzenegger handed out just 15.