Governor Gavin Newsom spent a portion of the day Wednesday with Nevada Governor Steve Sisolak. The two toured the damage caused by the Tamarack Fire, which is burning in both states. KTVU's Rob Roth reports.

CARSON CITY, Calif. - The governors of California and Nevada called for more federal firefighting assistance Wednesday as they toured a region blackened by one of several massive wildfires that have destroyed dozens of homes in the West.

The Democrats called on the federal government to provide more firefighting resources and stressed that climate change could make wildfires even more intense and destructive.

Sisolak said more support and firefighters would have prevented the U.S. Forest Service from having to make difficult decisions about where to direct its resources.

Nevada firefighters with the East Fork Fire Protection District told Newsom that each year fires are spreading earlier in the season due to hotter, drier weather.

The U.S. Forest Service manages the majority of wildfire-prone land in California. Newsom said the agency is understaffed, underfunded and needs major changes.

"We have a historic framework that has to be thrown out. You can’t look back a decade or two. The world is radically changing as the climate changes. You may not believe in science, you got it with your own damn eyes," Newsom said, gesturing toward the blackened landscape.

A historic drought and recent heat waves tied to climate change have made wildfires harder to fight in the American West. Scientists say climate change has made the region much warmer and drier in the past 30 years and will continue to make weather more extreme and wildfires more frequent and destructive.

Cooler weather and even rain helped the fight against some of the largest blazes this week but fire officials warned that hotter, drier weather was returning.

The 106-square-mile Tamarack blaze was more than halfway surrounded by containment lines. At least 23 buildings have burned since lightning sparked the fire on July 4. 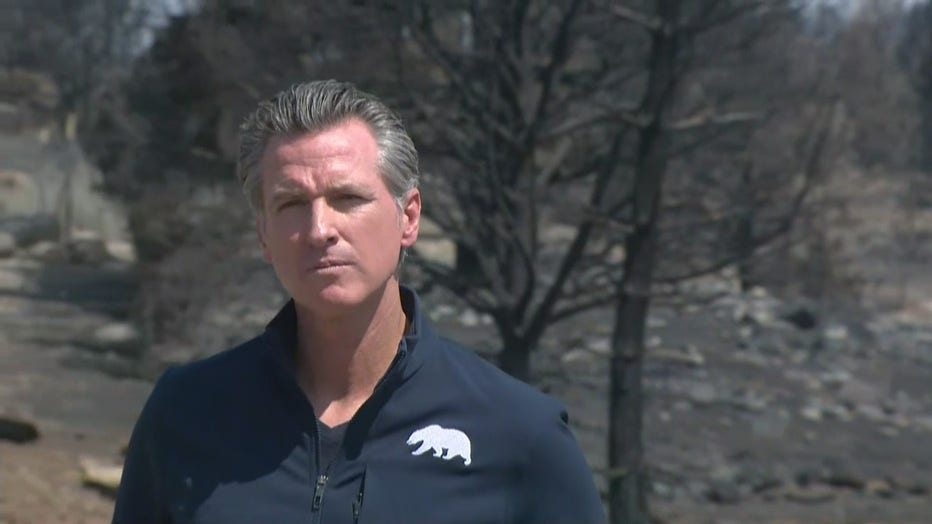 JULY 28, 2020 KTVU. Nevada Gov. Steve Sisolak (not pictured) and California Gov. Gavin Newsom stood on ashen ground and spoke with reporters as they surveyed burned homes and a mountain range of pine trees charred by the Tamarack Fire south of Gardne

Evacuation orders for about 2,000 residents on both sides of the state line were lifted early in the week.

Ed and Sonya Amaral returned to their Gardnerville home on Wednesday after being evacuated two weeks ago to find their trees blackened and brittle. The embers scorched nearby homes and an art studio, but spared the Amarals.

The couple believes their home still stands partially due to brush they cleared for a defensible perimeter. When they moved there in October, neighbors told them some of the trees hadn’t burned in two centuries.

They told the governors that they hoped the fires served as a lesson about the importance of fire prevention in forests and neighborhoods.

Tuesday thunderstorms brought rain and cooler, more humid weather that made grass and brush less prone to burning, fire officials said. The chance of thunderstorms with rain, possibly heavy at times, was expected through Friday.

"We’re not doing hand-to-hand combat" on the blaze, Dan Dallas, an incident commander for the fire, said Tuesday evening.

It was a relief from fiercely dry heat that scorched much of the West only a week or two earlier, when flames feeding on bone-dry fuel raged through a dozen states.

California’s largest blaze, the Dixie Fire, was 23% contained but threatening more than 10,000 homes in the region about 175 miles northeast of San Francisco.

The fire had scorched nearly 340 square miles, an area bigger than New York City. Weather conditions trapped smoke over the blaze and the shade helped lower temperatures and keep humidity up but authorities said temperatures could warm to well above normal in the second half of the week.

In neighboring Oregon, the 3-week-old Bootleg Fire has destroyed 161 homes, 247 outbuildings and 342 vehicles in Klamath and Lake counties. It was more than halfway contained after scorching nearly 646 square miles (1,673 square kilometers) of remote land.

Crews hoped to get a break from cooler temperatures through Wednesday before hotter, drier weather returned.

Record-breaking heat also has hammered the northern Rockies this week, as smoke from dozens of large wildfires as far away as California drove pollution to unhealthy levels.

Unhealthy air was recorded around most of Montana’s larger cities — Billings, Butte, Bozeman and Missoula — and in portions of northern Wyoming and eastern Idaho, according data from U.S. government air monitoring stations.