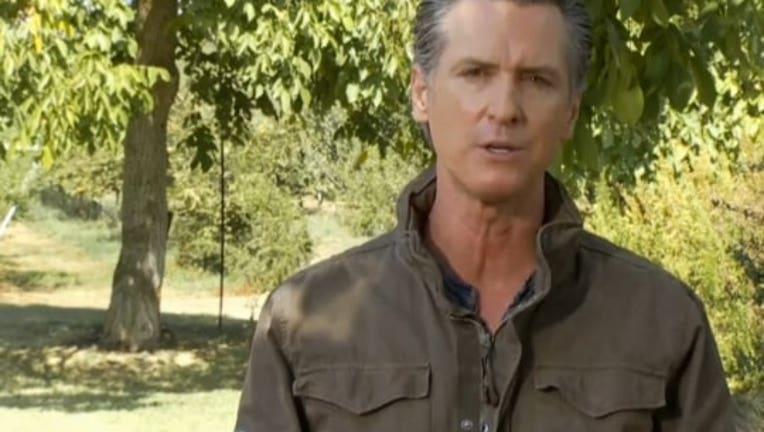 WINTERS, Calif. - Gov. Gavin Newsom signed an executive order Wednesday to protect nearly a third of California’s land and coastal waters in his latest effort to fight climate change that he has blamed for recent record-breaking wildfires.

He directed state agencies to pursue actions that will use the state’s lands and waters to absorb climate-warming carbon from the atmosphere.

Newsom, who made the announcement in a walnut orchard 25 miles (40 kilometers) outside of Sacramento, said innovative farming practices, restoring wetlands, better forest management, planting more trees and increasing the number of parks are all potential tools.

The goal is part of a larger global effort to protect 30% of the Earth. California is the first state to join 38 countries that have made similar commitments, Newsom said.

“Thirty by 2030 is the mandate,” Newsom said. “California, as the fifth-largest economy in the world, needs to flex its muscles, needs to assert itself, and to advance that cause, not only as it relates to its global impacts but hopefully jump-start similar efforts in other states across this country.”

State Senate Republican leader Shannon Grove of Bakersfield, in the state’s vast Central Valley farming region, called the order overly broad and said it could increase the cost of land and might have other unknown impacts on farming and grazing.

The order “will have potentially catastrophic implications to housing and the state’s ability to supply the world’s food,” Grove said in a statement.

This is the second major climate change directive from the governor since a string of massive wildfires broke out in mid-August. Fires have burned a record amount of land this year, mostly across Northern California, killed 31 people, destroyed nearly 9,000 homes, businesses and other structures, and produced massive amounts of air pollution.

Last month, Newsom directed state regulators to come up with rules to ban sales of new gas-powered passenger cars and trucks by 2035. He said that plan will reduce greenhouse gas emissions by 35%.

The automobile announcement was criticized by the White House. The U.S. Environmental Protection Agency’s chief questioned the legality of the move.

Newsom said this latest effort would build on the state’s legacy of protecting open space, the environment and biodiversity.

While more than half of California land is owned by the state or federal government, the U.S. Geological Survey estimates that only 22% of lands is currently considered protected.

The state thinks it could reach the 30% goal through further conservation efforts on public lands, according to the California Natural Resources Agency. But it wants to get private landowners and the federal government to improve conservation to optimize the role trees, soils and wetlands play in absorbing carbon, said Wade Crowfoot, secretary of natural resources.

“When someone thinks about taking action on climate change they think about putting solar on the rooftop or turning off the lights or buying an electric vehicle,” Crowfoot said. ”Today the governor elevated nature-based solutions to both combat climate change and build our resilience to these climate impacts.”

Practices that could be put in place include easements to conserve land, better soil practices in farming that helps absorb carbon and retain water and clearing out undergrowth to make forests healthier and more efficient at soaking up greenhouse gases. On the state’s lengthy coastline, it could also expand its marine-protected waters and restore wetlands.

The news was welcomed by several environmental groups, including some that cheered its impact on threatened species.

“Governor Newsom’s commitment is a watershed moment in the national movement to act on climate, confront the biodiversity crisis, and restore our lands and waters,” Collin O’Mara, president and CEO of the National Wildlife Federation, said in a statement.

The California Farm Bureau Federation said it is skeptical of the increased use of executive orders. But it is “cautiously optimistic” growers, ranchers and loggers would have a say in how the order is put into action.

“Actions stemming from this executive order should not intensify the existing regulatory environment that favors large businesses over small, and should not favor preservation over the use of renewable resources for public benefit,” Farm Bureau President Jamie Johansson said in a statement.

Newsom said the effort would not seek to curtail commercial uses on federal lands, such as logging, grazing or mining. He said it was aimed at conservation, not “taking something away.”

Food & Water Action California said the announcement failed to address the fossil fuel industry and thousands of gas and oil drilling permits issued by the state that contribute to climate change.

“Until Newsom acknowledges the urgent need to halt new oil and gas drilling instead of encouraging it, he can never be taken seriously as a climate leader,” state director Alexandra Nagy said in a statement. “Governor Newsom needs to go back to the drawing board and tackle the state’s biggest polluters head-on.”