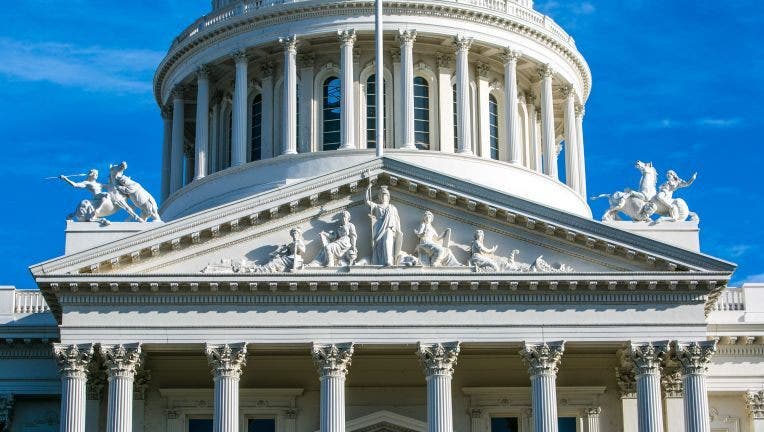 SACRAMENTO, Calif. - California lawmakers on Wednesday advanced three criminal justice reform bills, including one that could end the careers of bad apple police officers, an idea that failed last year despite broad public outrage over the police killing of George Floyd in Minneapolis.

But even some supporters made it clear the Senate-approved bill needs more work in the Assembly to clear up what they called vague language and rebalance a disciplinary board they said could be biased against law enforcement.

SEE ALSO: Widow of slain VTA employee says her husband and 'rock' died in her arms

Senators separately advanced bills reducing money bail to $0 for misdemeanors and lower-level felonies, and limiting the use of criminal enhancements that can add many years to offenders’ sentences.

The police officer disciplinary measure would add the nation’s most populous state to the 46 that already have ways to decertify officers. Hawaii, New Jersey and Rhode Island do not have such a law.

The bill by Los Angeles-area Democratic Sen. Steven Bradford is designed to stop officers who have been convicted of serious crimes or fired due to misconduct, including violating someone’s civil rights, from moving to another police department. It would create a mandatory new state license, or certification, that could then be revoked.

"It’s easier to lose a license for giving a bad perm than it is for killing an unarmed man," Bradford said, noting that the state already licenses many other professions from doctors to barbers.

The same bill puts new limits on police immunity from being sued for civil rights abuses, though Bradford had to scale back that portion of his measure when it nearly failed to clear a Senate committee.

The measure passed on a 26-9 vote with Republicans opposed, though none spoke against it.

On the Senate floor he related his own experiences being unjustly stopped by police and listed by name many who have died in such confrontations.

"It certainly seems to skew toward folks who are going to be pretty skeptical of police," said Sen. Ben Allen during the 75-minute debate.

Sen. Sydney Kamlager countered that the board would not necessarily be biased if it included people of color.

"Have some faith in people," she said. "News flash: Black folks, brown folks are pretty conservative when it comes to law enforcement. We like to be safe too."

Sen. Henry Stern was among those saying legal definitions in the bill are too ambiguous and must be tightened in the Assembly.

Stern also said there was an underlying tension against white senators like himself who supported the bill but want improvements - "that somehow it is racist to ask questions, especially if you are white."

"It is unfair and it is unbecoming of this body to castigate or to demonize colleagues based on their race," said Stern, whose district includes Thousand Oaks and other suburbs north of Los Angeles.

He added later that "We need to make sure that as we go after the worst — the people who dishonor this profession — that we’re not also deterring young people from going out to be good officers, because we still need law enforcement officials in the state of California who have honor and who want to serve."

Senators advanced the bail reform bill after voters in November defeated a law what would have ended cash bail in favor of risk assessments.

Opponents have said that legally binds the Legislature, since voters have spoken, but Democratic Sen. Robert Hertzberg argued that his bill reforms the existing system without ending it. He said it implements a ruling in April by the California Supreme Court that judges must consider suspects’ ability to pay when they set bail.

It also provides that bail must be refunded if criminal charges are eventually dropped or dismissed or if the defendant shows up for all required court appearances.

It passed on a party-line vote along with the third measure, which would implement a recommendation from Gov. Gavin Newsom’s Committee on the Revision of the Penal Code that judges should limit their use of more than 150 sentencing enhancements.

It says judges generally shouldn’t impose enhancements if the offense isn’t violent; is related to mental health issues, childhood trauma or prior victimization; or is triggered by an old conviction, particularly if someone was a juvenile. They should also consider if the enhancement would bring "a disparate racial impact," if a gun used in the crime was unloaded, and if the enhancement could bring a prison sentence topping 20 years.