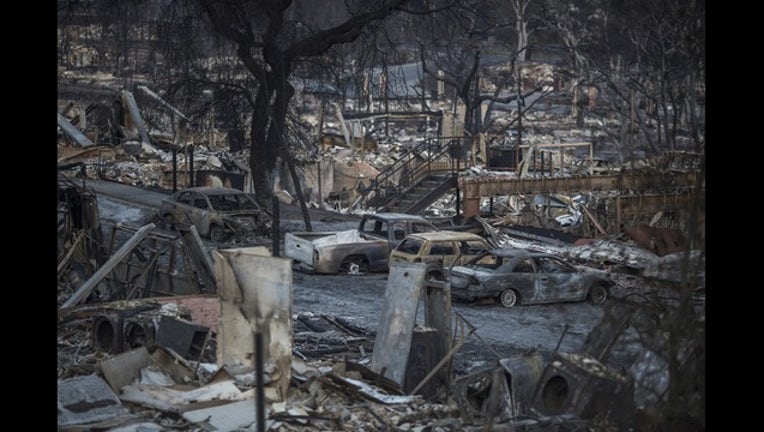 The ruins of houses destroyed by the Tubbs Fire are seen near Fountaingrove Parkway on October 14, 2017 in Santa Rosa, California. (Photo by David McNew/Getty Images)

The federal government will reimburse most of the costs, but the state will still need to come up with about $371 million on top of the state's existing wildfire budget, the Legislative Analyst's Office told the Senate Budget committee. That shouldn't be a problem because state revenue has far exceeded expectations so far this fiscal year and the general fund is flush with cash.

"The 2017 wildfire season in California was nothing short of catastrophic," said Mark Ghilarducci, director of the Governor's Office of Emergency Services.

Nearly $1.5 billion was spent fighting fires and on recovery north of San Francisco in October, including debris removal and infrastructure repair. A series of fires in wine country and other areas killed 44 people and destroyed 8,800 buildings, prompting $10 billion in insurance claims.

The state spent about $300 million on December fires in Southern California, including the largest blaze in state history that swept through Ventura and Santa Barbara counties. The preliminary numbers are likely to increase as officials get a better account of spending.

Gov. Jerry Brown has proposed spending $35 million in next year's budget to backfill lost sales, property and hotel tax revenue for local governments and to repair infrastructure. He also proposed spending $350 million from the state's tax on carbon emissions for forest management on fire prevention, new helicopters, fire engines and other purposes.

Meanwhile, fire chiefs from around the state are asking lawmakers for $100 million to boost the state's mutual aid system for sharing resources across departments.

That could include overtime for firefighters positioned ahead of time in areas experiencing dangerous weather and for new technology such as satellite tracking to monitor fire engines.