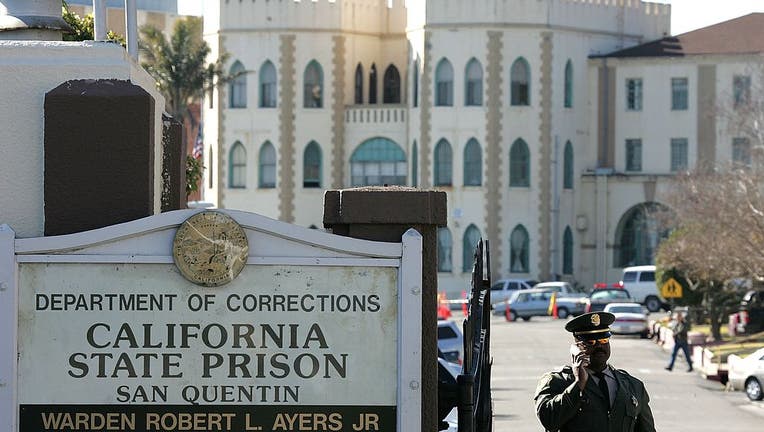 SAN QUENTIN, CA - JANUARY 22: A guard stands at the entrance to the California State Prison at San Quentin January 22, 2007 in San Quentin, California. The U.S. Supreme court threw out California's sentencing law on Monday, a decision that could redu

SACRAMENTO, Calif. - Prison inmates can’t legally possess marijuana under California’s law allowing recreational pot, the state Supreme Court ruled Thursday in overturning a lower court that found prisoners could have the drug as long as they didn’t consume it.

The justices said the 2019 appellate court ruling allowing prisoners to have up to 1 ounce (28.5 grams) of marijuana went against common sense. The high court sided with the state attorney general in finding the state's marijuana law approved by voters did not apply to Californians in prison.

"It seems implausible" that the voters intended to essentially decriminalize marijuana in prisons, Associate Justice Joshua Groban wrote for the majority.

"We agree with the Attorney General that if the drafters had intended to so dramatically change the laws regarding cannabis in prison, we would expect them to have been more explicit about their goals," he wrote.

California in 1996 became the first state to legalize medical marijuana, which also is illegal in its prisons. Twenty years later, voters approved Proposition 64 establishing the world's largest legal recreational pot marketplace. People 21 or older can legally possess up to an ounce of marijuana.

Cannabis is now legal in some form in more than 30 states. But Paul Armentano, deputy director of the National Organization for the Reform of Marijuana Laws, said he was unaware of any state that allows either recreational or medicinal cannabis in prison.

The case before the California Supreme Court arose from the conviction of five men who were found with marijuana in their cells. The Sacramento-based 3rd District Court of Appeal overturned the convictions, ruling that while state law made it illegal to smoke or eat pot in prison, it didn’t specifically criminalize possession.

Other California appeals courts had ruled that possessing cannabis in prison still was illegal.

Associate Justice Leondra Kruger, writing in partial dissent, agreed that the ballot measure did not legalize cannabis possession in California’s prisons and jails. But she said it left open the question of whether prosecutors could continue to file charges the same way they previously could, by choosing between what she called two overlapping felony statutes, one with tougher penalties than the other.

Voters could have intended to provide a "limited measure of leniency" for inmates caught with cannabis, she reasoned, even while not decriminalizing possession behind bars. She also said the court shouldn't have addressed the legality question at all, based on the way the appeal was framed.

She was joined by one other justice, Mariano-Florentino Cuéllar.

The lower court said corrections officials still could ban possession as a rules violation, just as they do for alcohol or tobacco, but not seek new felony charges that could add years to prisoners’ sentences.

"We are sympathetic to the view that (existing law) creates extreme disparity between how our legal system treats the possession of cannabis generally versus the possession of such a substance inside a correctional facility. That is also true of many other substances, including alcohol," Groban wrote.

"Some may well view an eight-year prison sentence for the possession of less than one gram of cannabis (one gram is the approximate weight of a single paper clip or a quarter teaspoon of sugar) as unduly harsh," he wrote. "The wisdom of those policy judgments, however, are not relevant to our interpretation of the statutory language."