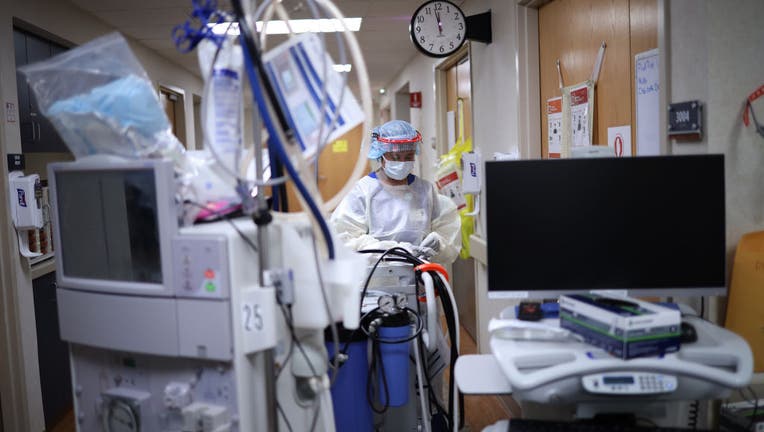 FILE - A member of the dialysis prepares to treat a patient with coronavirus in the intensive care unit at a hospital on May 1, 2020 in Leonardtown, Maryland.  (Photo by Win McNamee/Getty Images)

LOS ANGELES - For the third time in three elections, California voters are being asked to require changes to the operations of dialysis clinics that provide life-saving care to 80,000 people with kidney failure.

Proposition 29 on Tuesday’s ballot would require a doctor, nurse practitioner or physicians’ assistant to be present during treatment at the state’s 600 outpatient dialysis facilities.

Dialysis clinic companies say that under the mandate, between two and three doctors would be required at every facility because most are open at least 16 hours a day, creating a financial burden that could lead some clinics to close.

It’s the third consecutive general election where Californians have been asked to vote on dialysis regulations. It is one of the most expensive ballot questions in state history. Both sides have collectively spent more than $90 million this year, according to state records.

All three were backed by unions that represent health care workers. The two previous measures failed.

To stay alive, dialysis patients typically undergo four-hour treatments at least three times a week, during which the machines remove the blood in the patient’s body, filter toxins out, then put the blood back in, essentially temporarily performing the functions of the kidneys but outside the body.

DaVita Inc. and Fresenius Medical Care — two of the country’s largest for-profit dialysis providers — operate about three-quarters of the clinics in California.

Opponents of Prop. 29 say most clinics already offer high-quality care and are regulated by federal and state authorities. They also point out that all patients already have a nephrologist — a kidney specialist — who oversees their care and that nephrologists also direct each clinic in California. They say the initiatives are part of a tactic to pressure the dialysis companies to let workers unionize.

"This unnecessary requirement would cost hundreds of millions statewide, forcing dialysis clinics in California to cut back services or shut down, making it harder for patients to access their treatments — putting their lives at risk," the No On 29 campaign said.

"Most dialysis patients are medically fragile and often have other health issues," said a statement from Yes On 29. "Currently, when serious problems occur most clinics just call 911, which puts patients at risk and contributes to ER overcrowding."

In 2018, the union-backed Proposition 8 sought to cap dialysis clinics’ profits and force them to invest more of their profits in patient care. Voters rejected the measure but not before it became the most expensive initiative on the 2018 ballot, generating more than $130 million in campaign spending — more than $111 million from dialysis companies to kill the initiative and about $19 million from unions that supported it.

Two years later, voters rejected Proposition 23, which would have made mandates similar to this year’s measure.