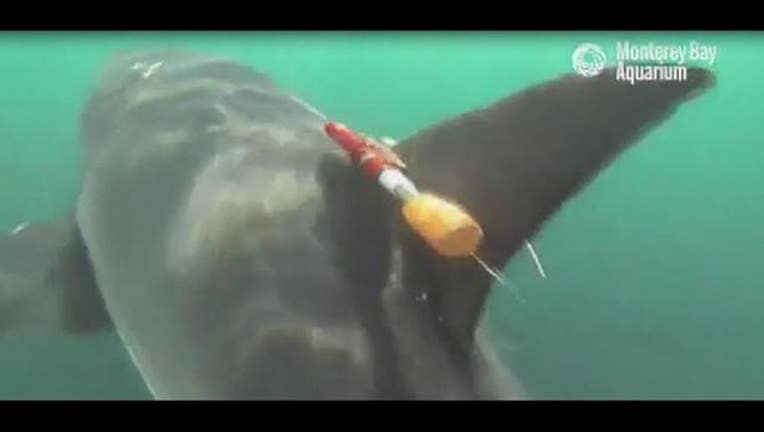 MONTEREY BAY, Calif. (KTVU) - Scientists at the Monterey Aquarium have developed a special camera that fits on a great white shark's fin, in hopes of learning more about the animal's habits.

Each year white sharks swim from the California coast toward Hawaii, stopping halfway to hangout in an area known as the "White Shark Cafe."

Although scientists believe the sharks head there to feed or mate, it largely remains a mystery. Scientists are hoping to send the cameras with the sharks as they head to the White Shark Cafe to uncover a glimpse of what happens there under the sea.

According to the Monterey Bay Aquarium, the project is the brainchild of research scientist Sal Jorgensen. He partnered with engineer Thom Maughan at MBARI.

Many researchers have attached cameras to sharks before, but those tags only stayed on for several hours. The new video camera tag will stay on for several months.

There were many special requirements the camera had to meet. It had to survive water as deep as 3,300 feet, speeds up to 25mph, it needed a battery for 10 hours of video recording, and it had to be programmable. Jorgenson described developing the Cafe Cam much "like a mission to Mars."

The team is currently in the testing phase, attaching the camera to sharks along the California coast.

More tests will continue until December or January when scientists hope to send the camera on its official mission. They plan to tag a shark with it who is headed out to the White Shark Cafe.

When the shark returns to our California Coast, the camera would automatically release from the shark's fin. Then scientists would use a satellite signal to track and locate the camera.

Jorgensen and Maughan are excited to see what mysteries the footage reveals.