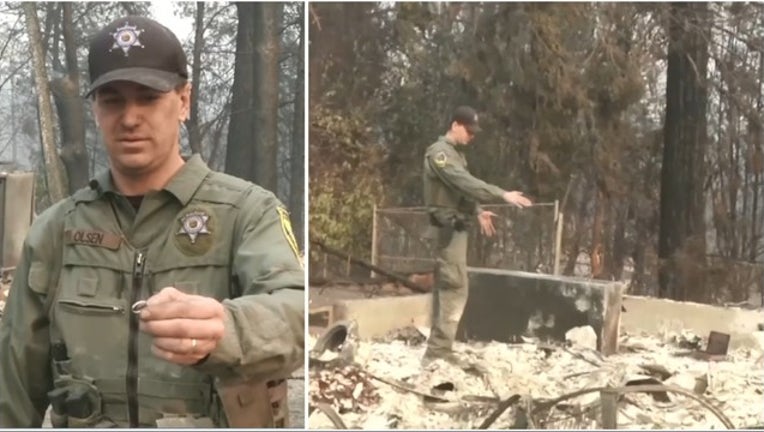 Calif. Game Warden Jake Olsen says he found his wife's wedding burried in the wreckage where their home once stood in Paradise before the 'Camp Fire' leveled the town.

After losing their home to the historically destructive Camp Fire, which has killed at least 23 people and leveled a Northern California town in a day, one couple found relief, if only for a brief moment, in the ashes of where their kitchen once stood.

California Game Warden Jake Olsen said he found his wife’s wedding ring while inspecting the damage at their Paradise property. His wife said she left it on their kitchen counter top. That was his only clue.

“It’s just amazing,” Olsen said, describing how he started digging. “I just didn’t think we were going to find it, but we had to try.”

During the initial chaos, as his home was burning down, Olsen was one of the first responders saving patients from a nearby retirement home. And though his life is scattered, with five different family households currently staying together under one roof, Olsen is grateful.

“We’re very lucky to have that family,” he said, adding that they’ve come together to share clothes and food.