The Lauderdale County Sheriff's Office in Alabama held a press conference on Friday, May 6, after announcing that the getaway SUV used by escaped murder suspect Casey White and corrections officer Vicky White had been found in Tennessee.

FLORENCE, Ala. - As the manhunt for escaped Alabama inmate Casey Cole White and fugitive prison guard Vicky White moves into its 11th day, experts are warning about White’s possible propensity toward "suicide by cop," as past criminal records show he has an alleged history of calling for it.

New details are slowly trickling out in the Florence, Alabama, escape of accused murderer Casey Cole White, 38, and the high-ranking jail guard who allegedly fled with him, 56-year-old Vicky White. The pair, who are not related, were said to have been in a "special" relationship.

A warrant from one of Casey White’s past arrests describes how he told a woman, "he wanted to kill her and have police kill him." The warrant stemmed from his attempted murder and kidnapping case from December 2015 in Limestone County, Alabama.

White allegedly broke into his ex-girlfriend’s home one night and fired several shots at the woman, but missed her. Four others, including two children, were in the home at the time, the warrant states. He allegedly fatally shot the family’s dog.

White was arrested after allegedly committing a bevy of other crimes that night. At the time of his arrest, he stated not only that he was trying to kill the woman, but that he "wanted to kill her and have the police kill him," the warrant states.

"His only regret was that neither was successful," the document continues. "He stated that if he was released he would kill the victim."

"That’s what I think we’re, law enforcement may be looking at," DePaul predicted to Fox News Digital. "The noose starts tightening, and that perimeter tightens up," DePaul went on. "You know, what’s his vision? What’s his mindset? And you gotta approach that very carefully."

Vicky and Casey had been in the throes of a "jailhouse romance" when they slipped away from the Lauderdale County Detention Center in Florence, Alabama, on April 29, Sheriff Rick Singleton told reporters on Friday. 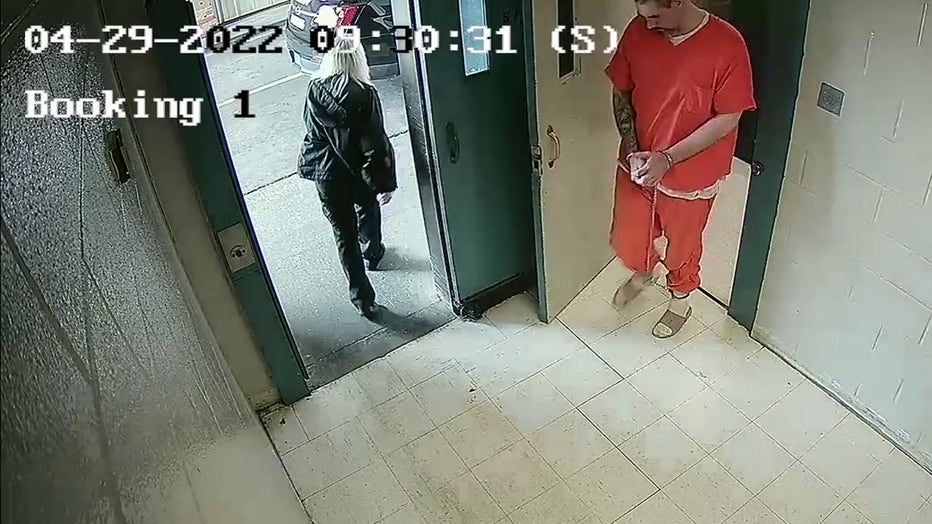 Surveillance cameras inside recorded Vicky White opening a steel door and, without looking back, holding it for Casey White, who slips out with his head down, dodging it as it swings closed. The two vanish through what looks like an exterior door wit

At the time, Vicky White left alone with Casey, telling co-workers she was transporting him for an evaluation at the county courthouse, officials have said. She allegedly said she would then go to see her doctor.

But Casey was not scheduled for an evaluation at the time, investigators later learned.

In the month before the escape, Vicky White allegedly sold her home. She was supposed to retire on April 29 – the day the pair disappeared – but the paperwork had not officially been filed with the state.

She also purchased an orange-colored 2007 Ford Edge SUV, which investigators tracked down to Bethesda, Tennessee, in Williamson County, on Thursday night.

Fox News Digital has since obtained video showing Vicky White at a local motel just hours before the escape. She was also reported to have been seen at an adult store, and buying menswear at a local store before the pair fled, according to multiple reports.

Casey White was serving a 75-year sentence for a slew of crimes from 2015, including carjacking, a home invasion and a police chase. He had been serving his sentence at the William E. Donaldson Correctional Facility in Bessemer, Alabama, but had been transferred to the Lauderdale County jail while he awaited trial for the 2015 murder of 58-year-old Connie Ridgeway.

Casey and Vicky White met in 2020, when Casey was being housed in the Lauderdale center after confessing to the 2015 slaying, authorities have said. The pair maintained contact and are said to have spoken by phone between 2020 and 2022, even when Casey was transported to the Donaldson center before he sent back to Lauderdale to await trial.

On Friday, the USMS revealed they had received a tip around 11 p.m. Thursday about a vehicle matching the description of the 2007 Ford Edge, and had since been able to confirm the SUV was the same one used by the fugitive pair.

With the help of the tip, they were able to track the vehicle to a tow lot in Williamson County, Tennessee, about two hours north of where the manhunt first began, the office said.

Tennessee's Williamson County Sheriff's Office said in a Friday tweet that the fugitive vehicle had been reported abandoned "a week ago" in Bethesda. "There is NO sign the two are still in our area," the tweet stated. 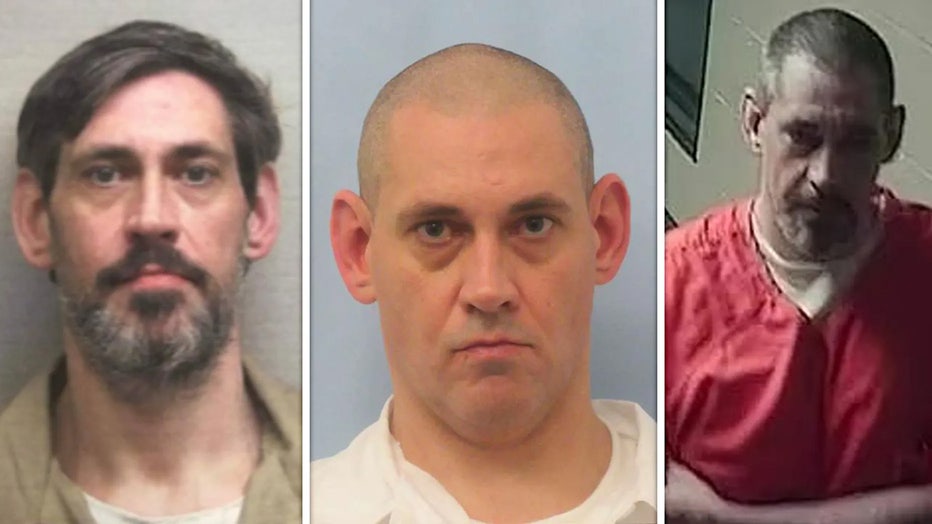 Casey Cole White, the imposing murder suspect who escaped from an Alabama jail Friday morning with the alleged help of a prison official, warned cops in 2015 that he’d kill his ex-girlfriend if he got the chance, according to court documents. (Lauder

Marshals describe Casey White as being 6-foot-9 inches tall and about 330 pounds, with brown hair and hazel eyes. Law enforcement images show he has worn his hair in various ways through the years, including shaved, shaggy and with a buzz cut.

He stands significantly taller than Vicky White, who is 5-foot-5 inches and approximately 145 pounds. She has brown eyes and is said to walk with a "waddling gait."

USMS images from late Thursday include photos showing what Vicky White would look like if she changed her hair color from her normal blonde to a darker shade, or if she shortened it from her typical length. 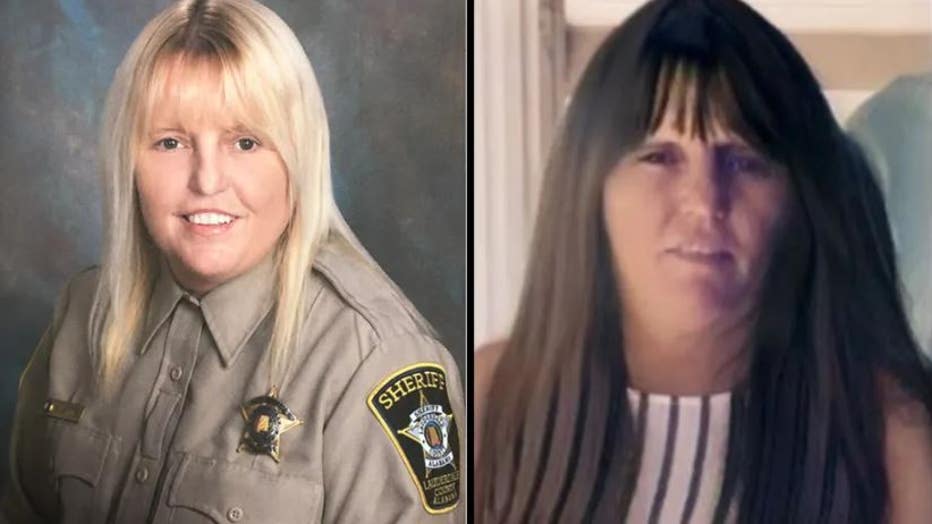 And several new images show the numerous tattoos Casey White wore on both sides of his chest, his arms and his back. The tattoos include a horseshoe emblem with a red-colored flower on his left pec; ink encompassing his full right shoulder and another tattoo covering part of his left arm; and a confederate flag on his back emblazoned by the words "Southern Pride" in a crude script.

He is allegedly linked to the local "Southern Brotherhood," a "White supremacist prison gang." 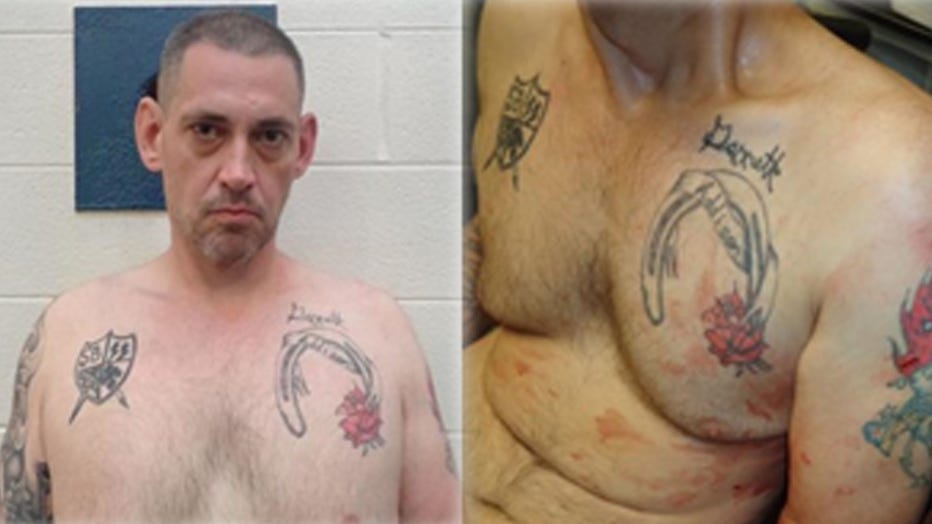 Authorities said Casey White "should be considered armed and extremely dangerous." The pair also might be in possession of multiple firearms, including a shotgun, an AR-15 and possibly Vicky White’s service weapon.

Officials are now offering a reward of up to $25,000 for information that leads law enforcement to the couple. Anyone with information on their whereabouts is asked to call the U.S. Marshals at 1-800-336-0102.