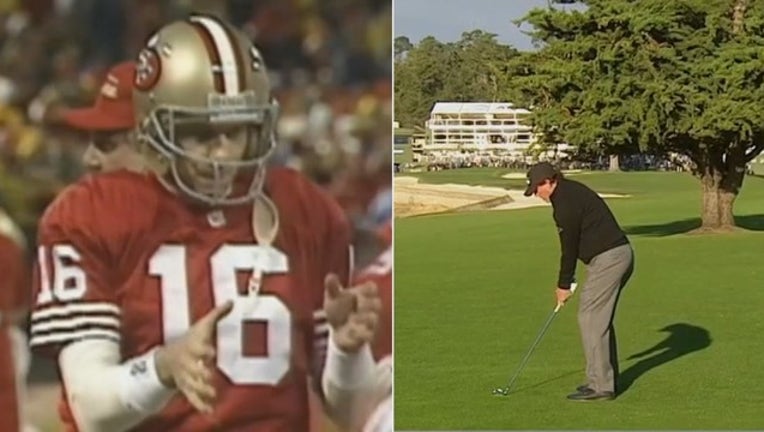 OAKLAND, Calif. (KTVU) - Some prominent people are getting ahead of the game, telling the public that they used Rick Singer’s company to help them with the admissions process to get into college, but they’re insisting they did not pay the Newport Beach consult to cheat in any way.

Pro golfer Phil Mickelson admitted to using Singer’s company to help his children through the college admission process, but he denies being involved in the alleged scheme. Mickelson's daughter attends brown university but the family has not been accused of doing anything illegally.

Legendary San Francisco 49 Joe Montana also came forward, tweeting: “Mr. Singer’s company provided nothing more than minimal consulting services to our family, like so many other families, with the college application process. Fortunately, our kids were able to pick from a number of schools to attend due to their hard work and their merit.”

Federal prosecutors in Boston on Tuesday identified Singer as the mastermind of a wide-ranging college admissions scandal who they say set up a charity that wove a deep web of deception and fraud to mask bribes and payoffs, funneling millions of dollars through the tax-exempt organization under the nose of U.S. officials, according to prosecutors and tax documents reviewed by The Associated Press.

Singer registered Key Worldwide Foundation as a charity in 2013, gaining accredited 501(c)3 status with the federal government. Its tax filings reported revenue that doubled each year, from $451,600 in its first year to $3.7 million in 2016.

Singer, painted by prosecutors as the ringleader of the biggest school admissions scandal ever prosecuted by federal authorities, is accused of funneling money from wealthy parents through his foundation, then using it to bribe coaches and others to get their children into elite universities.

Prosecutors said he also accepted so-called donations from clients to help their kids get a coveted enrollment spot through cheating. The scheme allowed the parents to claim tax deductions for themselves.

By funneling millions of dollars with such apparent ease, nonprofit experts are renewing their criticism of the Internal Revenue Service's limited ability to police wrongdoing.

"There is not an enormous amount of resources at the IRS and in other parts of the government to provide oversight in real time. What we're seeing now is it took years for the government to break down this situation," said Larry Lieberman, former chief operating officer at Charity Navigator, a nonprofit watchdog.

Singer pleaded guilty to fraud and conspiracy charges in federal court Tuesday in Boston. Coaches and dozens of parents are among the 50 people charged in the scheme, including actresses Felicity Huffman and Lori Loughlin and high-achieving figures in such fields as law, finance and fashion.

The Internal Revenue Service has been investigating the criminal case jointly with the FBI, said Amy Hosney, special agent with the IRS' criminal investigation division, who called it a "very troubling scenario."

"With the alleged payments from the parents through the foundation as 'donations' and coming out on the other side as bribes, we're certainly looking at the transactions," Hosney said.

Much of the $2.7 million that Singer is accused of funneling as grant donations appears to be part of an elaborate charity scheme to mask his reported bribes to university coaches, according to an AP analysis of the foundation's 990 tax records.

Singer used the money to pay off his co-conspirators, prosecutors say, including administrators of college entrance exams who rigged the ACT and SAT testing process and university coaches who put students who didn't play sports on team recruitment lists to improve their chances of getting admitted to schools such as Yale, Stanford and Georgetown.

The charity claimed to give the most grants to the University of Southern California - nine in all that totaled $550,000. Stanford on Thursday, however, told KTVU, that its sailing program had received $770,000 from the The Key Worldwide Foundation in three separate gifts. Two are from students named in the complaint. The third student is currently at Stanford but has 'no affiliation with the sailing program.'

USC officials wouldn't comment on whether it ever received such donations, but the grant descriptions and amounts allude to the bribes that prosecutors noted, including $175,000 to "USC Water Polo" and $100,000 to "USC Soccer Programs."

Coaches in those programs have been indicted on criminal charges.

In 2013 with Singer as Key Worldwide's president and CEO, the charity gave out two grants: $10,000 to "Georgetown Tennis" and $100,000 to an organization called "Fullerton Futobol Academy Inc." with an address belonging to California State University, Fullerton.

Chi-Chung Keung, spokesman for Cal State Fullerton, said the university discovered through state records that the organization listed by Singer is actually tied to USC women's soccer coach Ali Khosroshahin, who was indicted in the sweeping criminal case this week.

Khosroshahin previously coached at Cal State Fullerton, which does have an affiliation with a different program that bears a similar name to the one Singer listed.

Cal State Fullerton, Georgetown, Yale and New York universities said they never received the donations that the foundation claimed to have dispersed to them.

Aside from grants, Singer also found other ways to pay a coach. Former Georgetown tennis coach Gordon Ernst was named a consultant and paid $1.3 million by the foundation.

Georgetown said it had already fired Ernst for violating admissions rules before he was indicted.

Some of the foundation's other listed donations were fake, while Singer used some of them personally.

DePaul University confirmed it received three grants from Key Worldwide that Singer made as a parent, which the Chicago school solicited. His son graduated from the university in 2017. The grants were designated for study abroad programs, though Singer listed them in tax records as for the "religious studies department."

Some grants were listed as going to organizations whose connections couldn't be verified. They include "Community Donations," which shared an address with Singer's foundation, and philanthropic efforts such as the "Friends of Cambodia," a group that told the Palo Alto Weekly that it didn't know of and had never received money from Key Worldwide.

In addition, University of California President Janet Napolitano has ordered an internal investigation in the wake of the college admissions scandal. Napolitano is promising to take swift action against anyone involved in a similar scheme. UCLA put soccer coach Jorge Salcedo on leave earlier this week. He's accused of accepting $200,000 in bribes in exchange for helping two students gain admission to UCLA as athletes. At this point, there's no evidence that other UC schools are implicated.