The Republicans decried the fact that the deposition was happening behind closed doors and said Americans should be able to read transcripts of interviews being conducted.

WASHINGTON - Republicans disrupted a closed-door deposition Wednesday with a Defense Department official who was scheduled to answer questions as part of the House impeachment inquiry into President Donald Trump.

Laura Cooper, a senior official who oversees Ukraine policy, arrived Wednesday morning on Capitol Hill to appear before the House panels conducting the investigation. Shortly afterward, more than two dozen Republican House members held a news conference outside the secure room where the deposition was taking place and then pushed into the committee room, bringing the session to a halt. 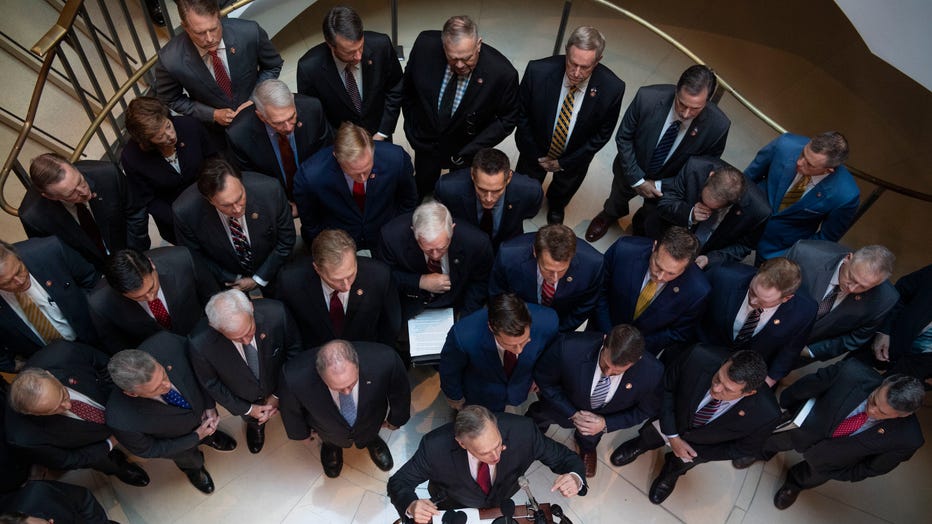 Rep. Andy Biggs, R-Ariz., at podium, speaks during a news conference in the Capitol Visitor Center outside the Laura Cooper, deputy assistant secretary of defense, deposition related to the House's impeachment inquiry on Wednesday, October 23, 2019.

The Republicans decried the fact that the deposition was happening behind closed doors and said Americans should be able to read the transcripts of any interviews being conducted as part of impeachment. Democrats have promised to release the transcripts when it won't affect their investigation.

Rep. Jim Jordan of Ohio said the Republicans are fed up with the secrecy surrounding the investigation.

"It's finally reached a boiling point where members just said they are so frustrated at the idea that they can't be a part of this and can't see what's going on," said Jordan, who is the top Republican on the House oversight committee. "We're at a standstill here."

"The members have just had it and they want to be able to see and represent their constituents and find out what's going on," he said.

Republicans who do not serve on the committees conducting the impeachment inquiry were among those who marched into the secure facility. Some of them brought their cellphones into the secure room where electronics are not allowed, several lawmakers said.

Lawmakers described a chaotic scene. Rep. Debbie Wasserman Schultz, D-Fla., said she had just walked into the room when the Republican lawmakers blew past Capitol Police officers and Democratic staffers. The staff member who was checking identification at the entrance was "basically overcome" by the Republicans, she said.

"Literally some of them were just screaming about the president and what we're doing to him and that we have nothing and just all things that were supportive of the president," Wasserman Schultz said.

"It just shows that there's no depths to which they won't sink to protect the president," she said.

Cooper's testimony came a day after a top U.S. diplomat testified that he was told Trump withheld military aid to Ukraine until the country's president went public with a promise to investigate Democrats. Democratic Rep. Ted Lieu of California said Republicans didn't want to hear from Cooper because they were "freaked out" by what William Taylor told lawmakers.

"They know more facts are going to be delivered that are absolutely damning to the president of the United States," Lieu said.