DUBLIN, Calif. - The Alameda County District Attorney on Tuesday filed a host of charges against three men after a retired Oakland police captain was shot filling up gas last month and the alleged thief he shot also died.

Charges include the attempted murder of retired Capt. Ersie Joyner, as well as the murder charges stemming from the death of a rapper that Joyner shot and killed during the course of the robbery at the Chevron gas station on Castro Street on Oct. 21.

Marlon Julius King and Kemandre Jacoby King were arraigned at the East County Hall of Justice in Dublin on Tuesday. The third suspect, Joshua Hayles, was the alleged getaway driver and was arrested in Houston over the weekend. He is being extradicted back to the Bay Area. All three were charged with second-degree burglary charges. 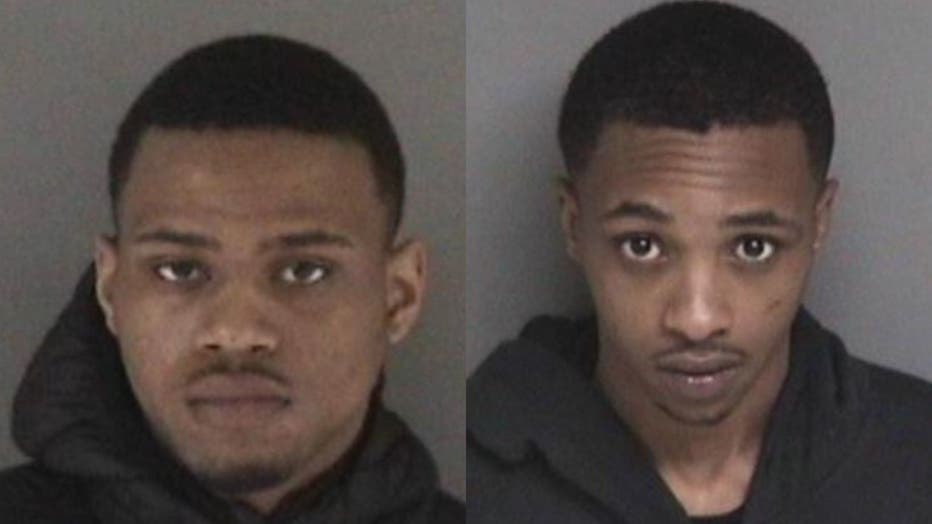 In addition, Marlon King was also charged with attempted murder, since video at the gas station showed he pulled the gun on Joyner, the former head of Oakland Police Department's Ceasefire program, while they were stealing from him.

After leaving the force, Joyner began a new career in the cannabis industry and now owns dispensaries in Oakland and San Francisco. He also owns a public safety and security consulting company.

None of the three defendants have yet entered a plea.

The Bay Area News Group noted a judge did not set bail for either of the King defendants and they are next due in court on Dec. 17.

MORE: Mom questions use of force in son's shooting by former Oakland cop

All three defendants also face murder charges because during the burglary, Joyner pulled out his own weapon and fired at a fourth accomplice, killing Desoni Gardner, 20, of Vallejo, a local rapper. Gardner died at the scene.

Even though the retired police captain was the one who actually shot the gun that killed Gardner, there is a rule known as the "provocative act doctrine," which allows a crime victim to use "justifiable lethal force" against his or her attacker.

Although there are critics of Joyner's use of force, the DA is not pursuing any charges against him.

"Ersie Joyner was senselessly attacked and shot while being robbed. We continue to pray for his full
recovery. Our thoughts are with him and his family," said District Attorney Nancy O’Malley in a
statement.

Marlon King and Kemandre King were also charged with one count each of assault with a semiautomatic
firearm.