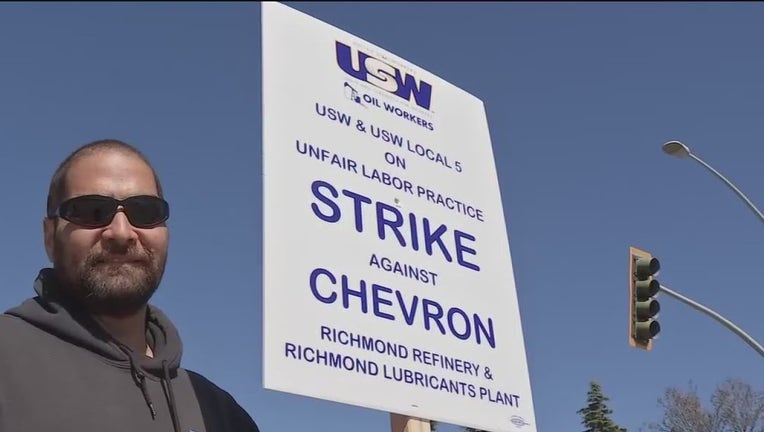 RICHMOND, Calif. - More than 500 Chevron union workers took to the picket line on Monday, when contract negotiations broke down. The workers say Chevron's offer is insufficient, given the Bay Area's high cost of living. The company brought in replacement workers.

Chevron's Richmond refinery was under replacement worker control for less than eight hours when it notified Contra Costa County, the need to use open-air flaring of burning gases; a valve to prevent explosions. Chevron's bringing in of replacement workers raises questions about safety.

Chevron says "the union's demands exceeded what the company believes to be reasonable and moved beyond what was agreed to as part of the national pattern bargaining agreement."

But, even with regular staff, consider Chevron Richmond's explosions, fires and flares. In 1989: a major explosion and fire that injured eight workers and firefighters. In 1999: another explosion and fire emitting sulfuric gases that sent hundreds of neighbors to hospitals. Ten years ago: a massive fire injured 6 workers and sent 15,000 neighbors to hospitals.

The Federal Government cited chronic failure to replace aging equipment penalizing it $2 million in fines and restitution. In the last decade, local media have reported on dozens of flares, a safety measure designed to prevent explosions.

Beyond safety, can Chevron maintain production which directly ties into the price of gas statewide?

"We already have a shortage of refinery capacity in California right now, and so losing even one or two percent of the state's refinery capacity would probably result in a noticeable increase in gasoline prices," said Professor Severin Borenstein, a UC Haas School of Business Energy Institute economist.

Chevron Richmond produces about 15% of California's gasoline, about 1 in 6 gallons. So it must, maintain volume. "The potential for a gas price spike in California is very real, California has a very tight gasoline market right beyond just having high oil prices," said Professor Borenstein. But, Chevron has a southern California refinery, not on strike, which also produces about one in six gallons. If prices go up, it will make much more money from what it produces there as well. Any shortage raises all prices, regardless of brand. "California not only has high crude oil prices but also high refinery margins because they're running at capacity," said Borenstein.

This is all on the edge right now and you're paying for all of it.