A freight train that collided with several cars in Oakley left a 12-year-old dead and a 19-year-old critically injured, according to officials. KTVU's Brooks Jarosz with the latest information.

OAKLEY, Calif. - A 12-year-old boy was killed and a 19-year-old woman critically injured when a freight train collided with three cars in Oakley on Wednesday, fire officials said.

Both victims were traveling in the same car. The boy was a passenger and the teen was driving.

The crash happened shortly before 1 p.m. at a railroad crossing on East Cypress Road, not far from an elementary and middle school. 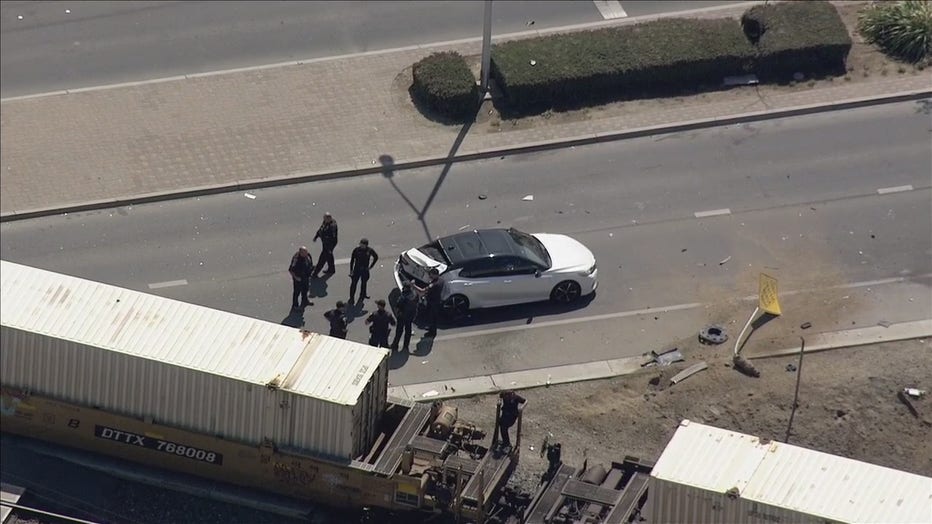 A train collided with several cars in Oakley on Aug. 25, leaving a 12-year-old dead and a 19-year-old critically injured, according to officials.

The identity of the boy has not yet been released, but the superintendent of the Oakley Unified School District confirmed in a statement that he was a student at nearby Delta Vista Middle School.

"I am saddened to share that a Delta Vista student passed away earlier today as a result of a vehicle accident," Superintendent Jeff Palmquist said. "Our deepest sympathies are extended to the family, the Delta Vista school community, and other staff and school communities who are impacted by this tragedy."

KTVU learned that the schools in the area had been dismissed early. Some parents expressed concerns  on social media about whether the railroad tracks were defective.

Others wondered if traffic congestion in the area may have also played a factor in the crash.

City officials said it appears that all signals in the area were working properly. And as it pertains to traffic congestion, the city said changes were already made to mitigate some of that.

"Per traffic studies, road striping changes have been implemented at East Cypress Road and Main Street that sought to alleviate congestion by providing double left turn lanes from westbound East Cypress to southbound Main Street," the city said on its Facebook page.

City officials said the traffic signal was also adjusted at the intersection to "expedite the flow of traffic" during peak hours.

The Oakley Police Department and the Federal Railroad Administration are the agencies handling the investigation.